They think it's all over … it is now: one night in Camden as England lose Euros final 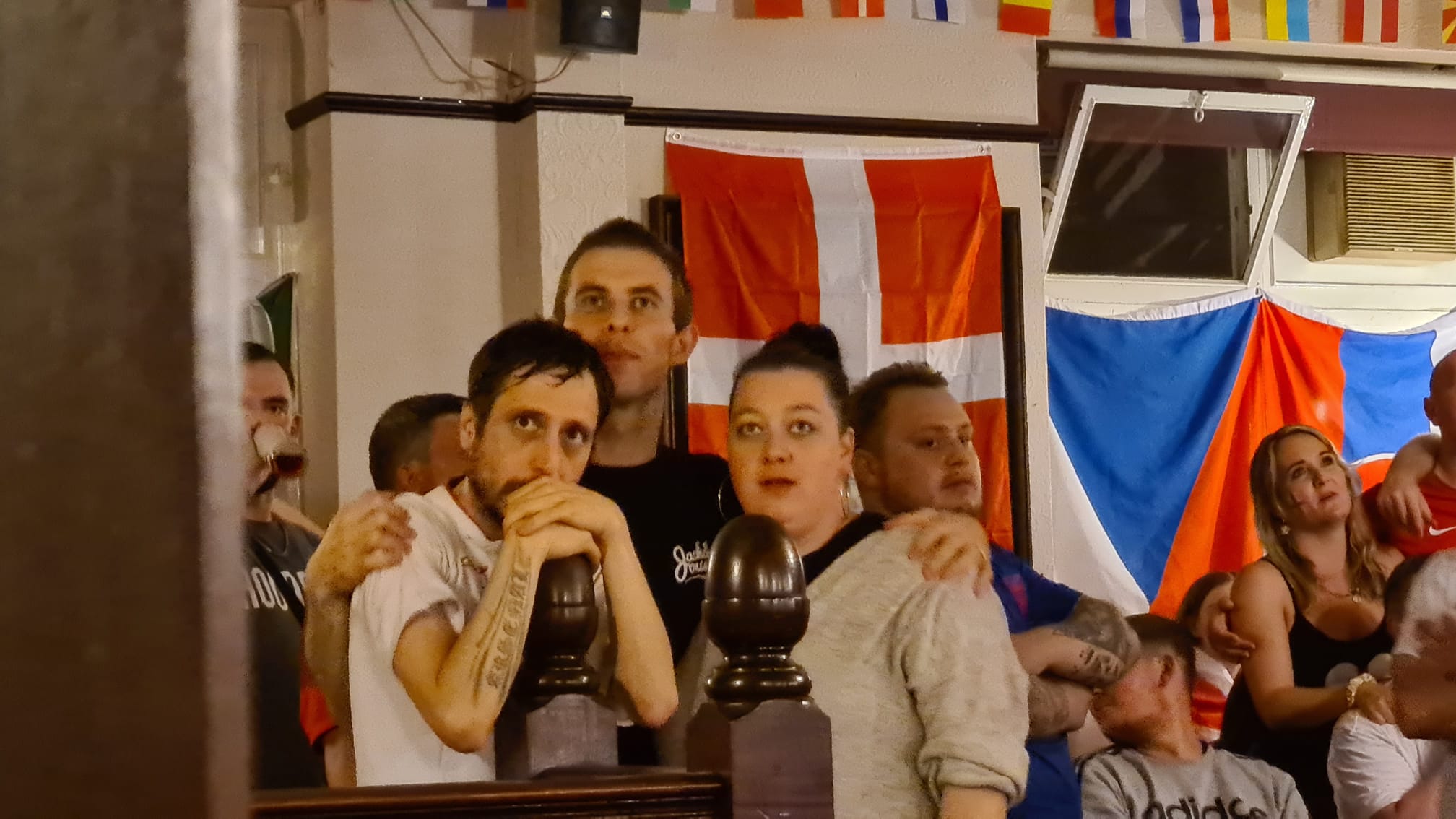 A night that ended in disappointment for England fans

THERE were tears last night (Sunday) as England’s rollercoaster European Championships campaign came to an end.

Pubs were packed to the rafters across the borough as fans navigated anti-Covid measures to hopefully watch England end 55 “years of hurt”.

Over at the North Star in Finchley Road – always a popular place to watch football – the party atmosphere had started early. Chants of “England, England, England” grew from a faint murmur to a full throated roar. 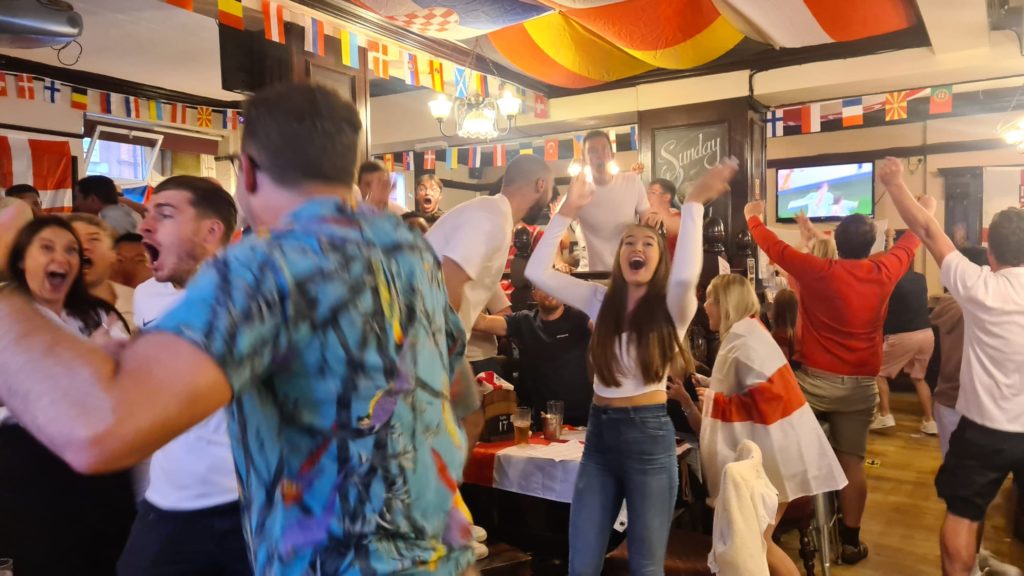 An early goal in the North Star and, below, The Dome is decked out in bunting for the community screening 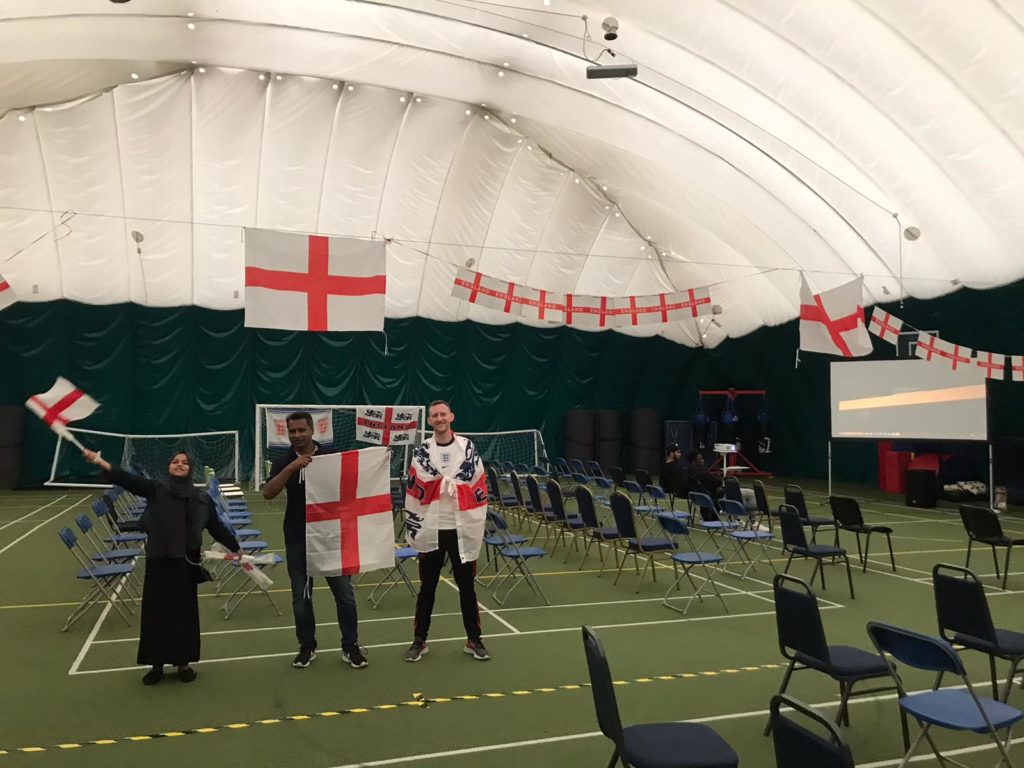 Many had been there to see the win against Denmark on Wednesday, the triumph over Ukraine days before and the tense victory against Germany the week before that.

Their attendance had become a superstition. Most took up the same positions, and wore the same shirts on as they did for the semi-final.

The early tension was broken by unbridled celebrations two minutes in to the match when Luke Shaw bundled in a volley at the far post. Punters were off their seats, hugging their friends, lifting their ceiling off with the cheers.

There was injury in the line of duty.

Jonti Purdom, whose family run the North Star, ran through the pub jumping to punch the air, only to bang his head on a lamp above the bar and cut his head open.

Everyone now believed. It was really going to happen.

Refreshed by traditional half-time orange segments, provided by the pub, the football became secondary to the celebrations. The “upstairs” of the pub engaged in a running chanting battle with the “downstairs”, the atmosphere geed up with alternative uses for fusilli pasta. 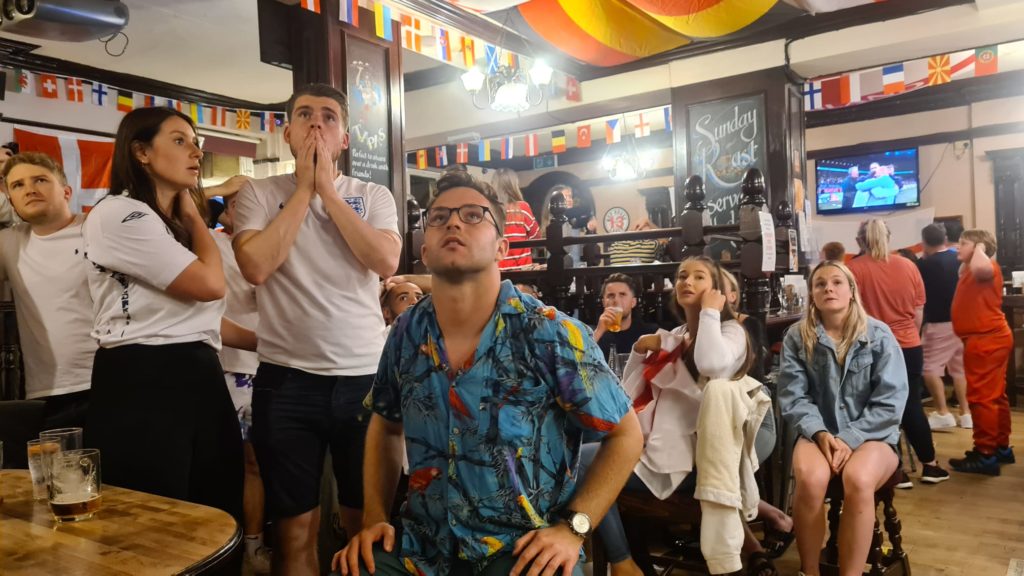 Fifty-five years of hurt: Italy come back to win to the dismay of fans at the North Star

For the fans still watching, Italy were in the ascendancy – and if successive squandered chances deflated the jubilation, Leonardo Bonnuci’s equaliser on 67 punctured it. Hands on heads, mouths opened, furrowed brows.

For many, this wasn’t in the script.

The rest of the game was watched with tension. The odd shout of “come on England” being drowned out by concentration. England’s improvement in extra-time yielded chances, but penalties began to look a foregone conclusion.

The first penalties were met with muted cheers. Harry Maguire’s hammer of a penalty with air punches.

Then Andrea Belotti’s effort was saved by Jordan Pickford, and the pub went berserk. It was going to happen. It was coming home.

Unless you have been living under a rock for the last 24 hours, you’ll know what came next.

Thirty million people, and thousands in pubs across Camden watched Marcus Rashford and Jadon Sancho miss. Pickford’s save from Jorginho offered the briefest flicker of hope, before the flame was extinguished by Buyayo Saka’s fateful final miss. 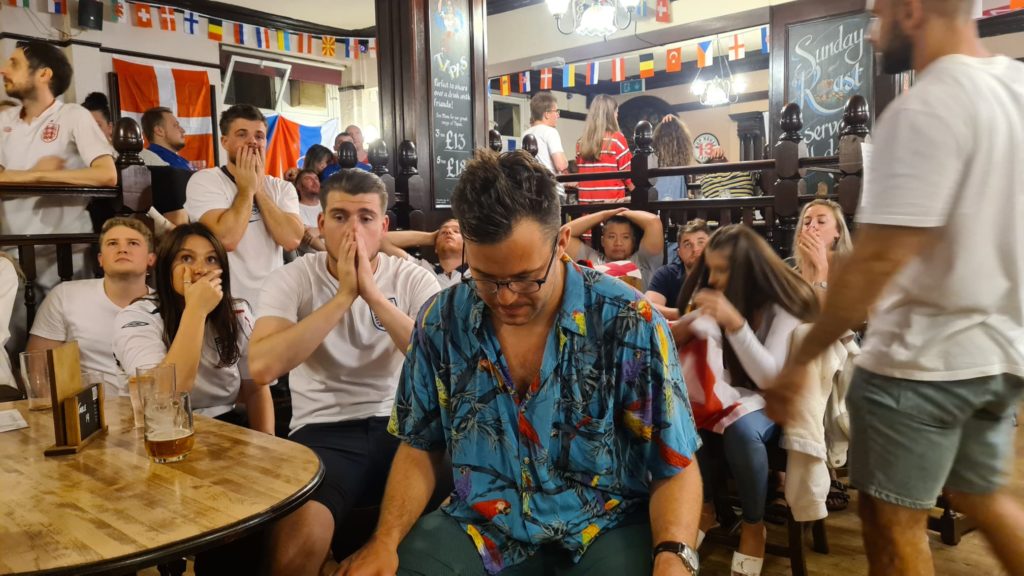 The agony of spot kicks

The party became a wake, and within seconds of the final whistle, fans trooped out into the rainy July evening.

Kevin Garrett, one of the many people to become part of the furniture at the North Star during Euro 2020 said he was “gutted” by the result.

“When it went to penalties, I knew,” said the Arsenal season ticket holder.

He watched the game with his daughter, Bailey, whose middle name is Lanesra – Arsenal backwards. She had been reduced to tears when the final whistle went. 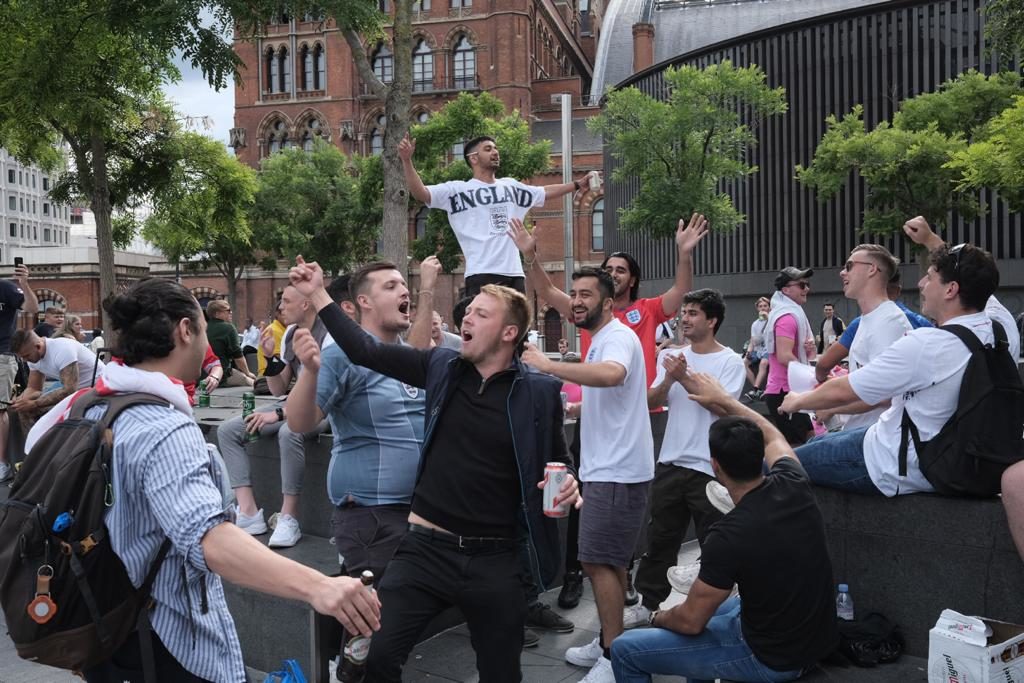 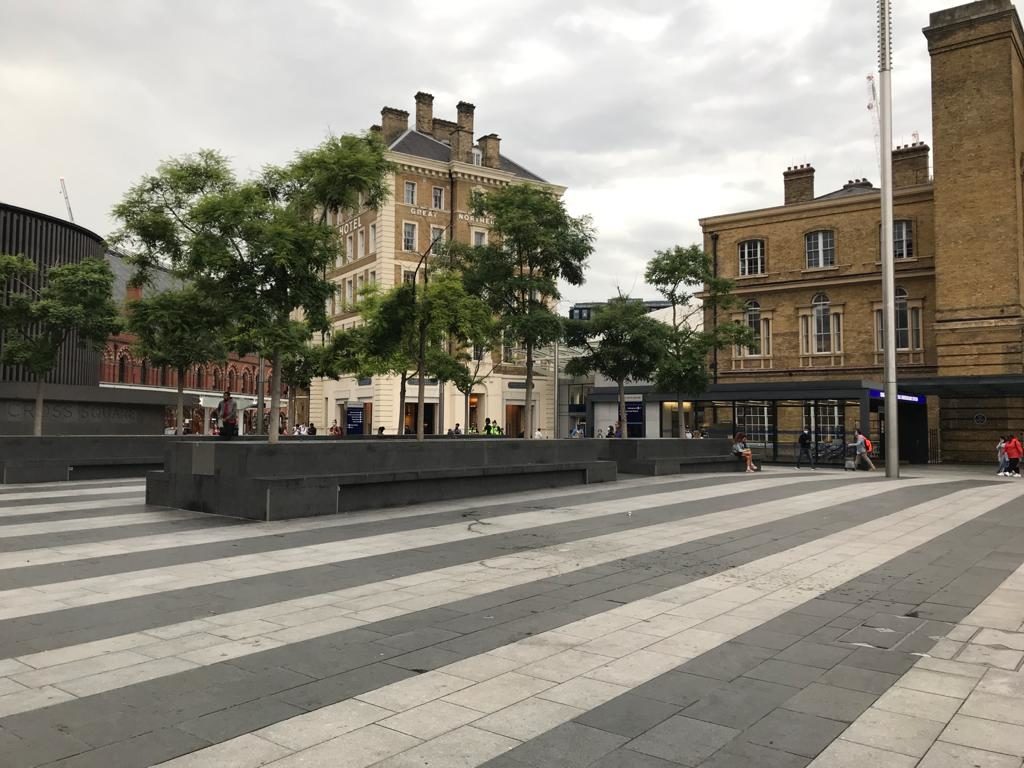 Mr Garrett added: “When we got the early goal, I thought this it it, but once they got back into it I wasn’t sure. You know what, it has been a great tournament and they’ve been brilliant.”

Adrian Bridge, another to watch the games at the pub said: “It’s been such a good tournament and you can’t blame any of these players for what’s happened [with the penalties]. You can’t take away from the glorious moments these players have given us. I remember us losing to West Germany in 1970 and being in tears then. Hopefully we’ll do it next time.”

Natasha Purdom, who was born in Bedford, which has a significant Italian population said: “I’m gutted, I’m just so gutted. I really thought they were going to do it. But at least part of my home town will be celebrating.”