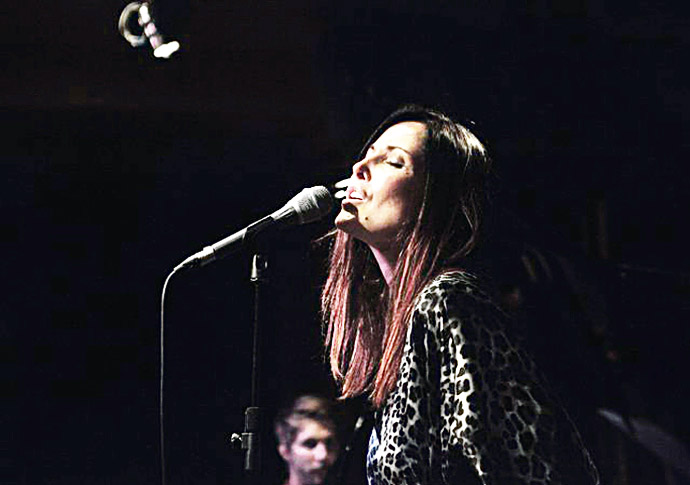 Jo Harrop is on tour with her new album, The Heart Wants. George Nelson Photography

THERE is an old joke, minted when dinosaurs roamed the clubs of Soho. How many female jazz sings does it take to sing Summertime? All of them, apparently. Boom, boom.

That might have been true back in the Mesozoic era, but there is a whole raft of women vocalists who have moved well beyond the standards repertoire into more interesting and challenging terrain.

Take Jo Harrop, stalwart of the slowly re-emerging Hamp­stead Jazz Club and, as singer Ian Shaw, host of the Ronnie Scott’s Radio Show, describes her, “an authentic jazz voice”, who used the pandemic to polish her cache of self-penned works.

Jo, Durham-born but London-based, certainly knows her way around the classics and her last album, Weathering The Storm, a duet with Jamie McCredie, exclusively featured old favourites.

However, it was the arrangements that made that record stand out – backed only by guitarist McCredie, it was stark and yearning, a bare-back soundtrack for bruised souls in, as she put it “turbulent times”.

Her voice reminds me of the way New York producer Kip Hanrahan used to mike Carmen Lundy (see Love is Like a Cigarette on his Days and Nights of Blue Luck Inverted), so intimate you can almost feel her breath in your ear. Have a listen to the bitter-sweet bar-room ballad In The Wee Small Hours or My Foolish Heart, an integral part of the Bennett/ Evans repertoire, from Jo and Jamie’s album to see what I mean.

Now that voice is back on a new album, The Heart Wants, this time with all original material, although many of them sound like they’ve been around for decades (that’s a compliment), with some unexpected but welcome nods to pop and soul. If, as one critic said, Weathering The Storm was skeletal, then The Heart Wants puts plenty of flesh on the bones.

The guests include the great bassist Christian McBride, there’s Jason Rebello on keyboards, Troy Miller on drums and Andy Davies, a man who has the full ABC (that’s Armstrong, Baker and Clifford) of trumpet playing at his command.

Jo’s velvety vocals, however, refuse to be upstaged by such stellar company and, with McCredie – alongside Hannah V – again at the controls, The Heart Wants (out October 8) is a sensuous delight.

Jo is touring both records over the next few months, including October 17 at the 606 Club in Chelsea. But the big event is Friday November 5, when there is a quadruple jazz album launch at the Cadogan Hall, billed as an evening of “New Jazz Fireworks”, curated by Hampstead Jazz Club. The quartet is made up of Jo’s new opus, Alex Webb’s British Standard Time, Paul Edis’s solo piano album The Still Point of the Turning World and guitarist du jour Chris Standring’s Wonderful World with the Geoff Gascoyne Orchestra. The common thread is that all four are on the Lateralize Records label (lateralize.co.uk).

November 13 sees Jo make a welcome return to the Hamp­stead Jazz Club’s mothership at the Duke of Hamilton pub, where she will showcase songs from the new album in the company of Edis and McCredie. On November 17, at the same venue, she and McCredie re-visit Weathering the Storm.

Finally, looking way ahead, she is at Camden’s Green Note (December 3) in Parkway, which is now presenting a packed music programme, and although jazz makes up only a small proportion of its offerings – one or two gigs a month – it is really good to have it back at full throttle.

For details of all gigs, see joharrop.com