The inside story of the ‘Zuma enigma'

Ronnie Kasrils, who helped orchestrate ANC operations from offices in Fitzrovia and a flat in Golders Green while in exile, recalls a dark period in post-Apartheid South Africa, and reveals his hopes for the country's future 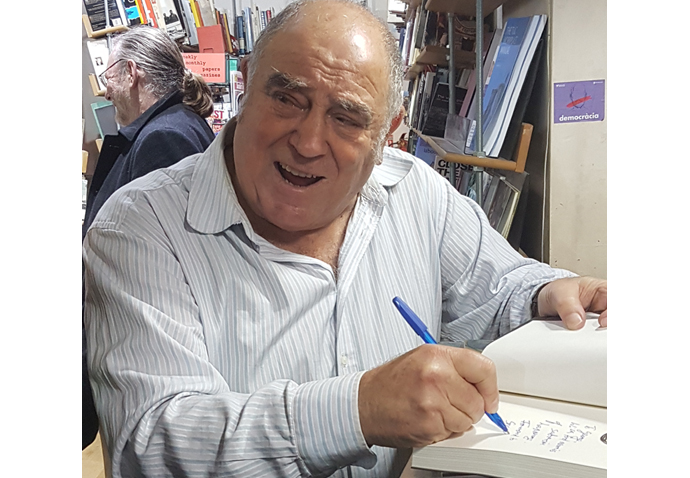 THE sound of clocks was everywhere. In almost every room of the Thabo Mbeki’s official presidential residence, timepieces were ticking off the final moments of his rule. Yet as they inched towards midnight, the moment he was to be finally replaced as South African president, Mbeki was oddly calm.

Symbolically, at least, the night of 24 September 2008 was a landmark. The man about to take the presidential hotseat, president-elect Jacob Zuma, was embroiled in corruption scandals and allegations of rape and sectarianism: to those in the know, he was a serious danger to the country.

Yet Mbeki was leaning back in his favourite chair, sipping whiskey and languidly discussing African history. His solitary guest, intelligence minister Ronnie Kasrils, was trying to keep up with his president’s conversation.

“I lived on the government estate next door to Mbeki, so I stayed until midnight drinking whiskey,” Kasrils recalled.

“I was sitting there thinking, ‘Christ, history is being written. It’s ten-to-ten and in two hours and ten minutes, he will no longer be president’.

“When the clocks reached five-to-midnight, he was still expounding on Libya and African unity. I was thinking: ‘What’s going to happen when they strike midnight? There are 20 clocks here and they will all chime at the same time. What if he doesn’t even notice?’ It was a moment of history but not to Mbeki …I guess, he was a pretty emotionless person.”

As minister for the intelligence services and a senior veteran of the ruling African National Congress (ANC), Kasrils knew Zuma well. In the 1960s, they served together in the ANC’s armed struggle against Apartheid. He watched Zuma climb the political ladder and followed the controversies. As Kasrils toyed with his whiskey glass, his face clouded over.

History realized Kasrils’ worst fears: by the end of Zuma’s nine-year presidency, South Africa was riven by corruption on an industrial scale, including ‘state capture’ of government by corporations and Zuma’s billionaire political backers, the Gupta brothers.

Hours before Zuma resigned earlier this year, police raided the Guptas’ mansions. This month Zuma went on trial for graft, racketeering, fraud and money laundering in a 1990s arms deal, the first of 783 corruption charges in the pipeline. Official unemployment is conservatively estimated at 36%, public services have collapsed, including health, utilities and education, which the OECD now ranks 75 out of the 76 industrialised countries. Crime, meanwhile, is almost out of control – there were more than 16,000 murders in 2012, around 45 daily.

Zuma had already survived sensational scandals to become president. His third of five wives committed suicide, leaving a note blaming “24 years of hell” which was disappeared by government fixers. A corruption probe failed to convict him on a technicality, and he was somehow acquitted of rape, a trial which deeply affected Kasrils deeply. But the nadir was in 2012 when police shot dead 44 striking platinum miners and injured 78 in Marikana, a crisis that traumatized the country.

Speaking at the launch of his new book, A Simple Man: Kasrils and the Zuma Enigma, Kasrils pronounced Marikana the moment a wound opened between millions of poor black South Africans and the ANC, the organisation that had led the struggle against Apartheid and swept to power in 1994 under Nelson Mandela.

“Marikana is the reflection of the change in South Africa from national liberation to this new era,” he said. “After Apartheid, we expected that the very strong working class and trade union movement, and the radical national liberation movement, would push the country to socialism, but it didn’t go that way. After Marikana there was a dreadful cleavage: the people’s government firing on the people. It was a massacre, sheer butchery and it brought us into this new era.”

Kasrils is part of ANC lore for his part in the armed struggle when he and his wife Eleanor helped lead the ANC’s armed-wing, Umkhonto We Size (MK), Spear of the Nation. In exile for many years, they orchestrated MK operations from offices in Fitzrovia and their flat in Golders Green.

Mandela turned to Kasrils to become deputy defence minister, and when he retired in 1999 and Mbeki became president, Kasrils was retained as forestry minister before being asked to take over the secret services. Since stepping down in 2012, he has been one of the weightiest voices amid the national soul-searching, shrinking voter support for the ANC and doubts the ANC can deliver its 1955 Freedom Charter, a pledge to build a socialist, non-racist country that is a pillar of its constitution and an article of faith for South Africans. A lifelong member of the South African Communist Party (SACP), Kasrils has also been central to the key debate whether the historic tripartite alliance between the ANC, SACP and the Congress of South African Trade Unions (COSATU) can hold.

Speaking to a packed Bookmarks bookshop in Bloomsbury, he revealed that among all the crises of the last few decades, Marikana and Fezekile Kuzwayo’s rape affected him most.

Marikana was an explosion after two decades of neo-liberal policies, which allowed corporations to extend their reach into government and militarised the police, he said.

In the early 1990s, in Apartheid’s dying days, a cabal of ANC leaders had negotiated secret deals with Washington and London for a smooth transition that included protection for the Apartheid-era corporations. Signed in the wake of the collapse of the Soviet Union, the ANC’s old ally, they paved the way for three decades of privatisation, loosening corporate controls and undermining trade unions. Kasrils was firmly in the wing that fought neo-liberalism from within government, trying to build a post-Apartheid country.

Zuma rose from the shanty towns, spent years in the notorious Robben Island prison for his ANC activities, climbed to the organisation and built a business empire on the back of government deals. A self-styled man-of-the-people, he was appointed deputy president by Mbeki in 1999, and by 2007 had become president of the ANC, effectively national president-in-waiting.

By then he was a figure of hope for big business and government opportunists, who saw new opportunities, also right-wing nationalists enthused by his Zulu roots, which he exploited. Meanwhile, for many in the ANC and SACP hierarchy, he was the man to stop the country’s neo-liberal drift. They blamed Mbeki for many of the corporate-friendly policies, Kasrils pointed out actually started under Mandela.

In such times, the stage yields to the bold and the ruthless, and Mbeki was neither.

Born to legendary figures in the ANC, he led an important student movement in the 1950s before escaping to Britain where he graduated from Sussex University. Blessed with brilliant organisational skills, his style was “bookish and intellectual”, said Kasrils.

“In 2006, the government was split, and the intelligence ministry was a rats’ nest: some were loyal to Mbeki, others to Zuma. There was fake news, dirty tricks and a deep state behind the scenes.”

But the SACP’s top committee refused to listen.

“I was sitting there explaining to a group of hardened revolutionaries – they’d been in exile, were from the mines, or the underground movement – and I could see it was going down like a lead balloon. They gave me a polite hearing then said, ‘Thanks, comrade Ronnie, but Zuma will open up the road for the left’. Yes, I knew then that no matter how much I presented the obvious truth, they couldn’t be swayed.”

Part of the problem was that his card had been marked: he was Mbeki’s minister of spooks and at the centre of the Kuzwayo rape trial. He had known her since she was a child, the daughter of an ANC activist in Robben Island. And it was Kasrils that she telephoned for support moments after her assault.

In court Zuma blamed the 31-year-old HIV and Aids campaigner for bringing on her assault by wearing a skirt and boasted that he had “protected” himself from infection by showering.

After each hearing, he appealed to supporters outside the court, traducing her on national television. Kasrils was called out for setting a honey-trap to block his political rise.

It was a dark time for Kasrils, who is still emotional over the trial, the misogynistic outpouring and Kuzwayo’s death, a few years later.

“Our ANC government began in 1994 with the hope of a democratic non-racist, non-sexist South Africa, a country that would put into the dustbin of history oppression and exploitation of women. But we had men philandering and carrying on, like Zuma. There were the most disgraceful scenes, a witch-hunting phobia. Zuma’s supporters were shouting ‘burn the bitch’. ANC and SACP youth leagues said the rape allegations were a conspiracy. Zuma even addressed them with an old MK song. Very few defended Kuzwayo, just a couple of dozen young men and women outside the court.”

In office, Zuma opened the floodgates to corporate influence and ministerial corruption, and reversed reforms that had sloughed off some of the vestiges of Apartheid’s paramilitary policing practices. Police chiefs encouraged a shoot-first policy and torture that is now “one of the biggest problems we face”, said Kasrils.

In a Hobson’s choice, voters ditched Zuma for Cyril Ramaphosa in the recent presidential elections. Former union-leader Ramaphosa has a business empire that includes interests in mining companies, utilities and properties, plus exclusive control of McDonald’s in South Africa.

It’s possible during that last night with Mbeki, that something rubbed off on Kasrils. As the clocks ticked, the president preferred to reflect on the sweep of history and the long future for Africa. With a new president at the helm, Kasrils is sanguine.

“True, business is ecstatic. But almost the whole country sighed with relief when Zuma lost. There’ll be no more kleptocracy of criminals. With Cyril, however, there are different questions: he is a technocrat who knows how to clean the government’s Augean stables, but when it comes to the clean break we need with neo-liberalism, is he going to do that or remain loyal to international capital?”

Kasrils mused for a moment, perhaps feeling the years himself.

“It’s the 200th anniversary of Karl Marx, who said ‘philosophers have interpreted the world, the point is to change it’. Well, we have to show the new generation it’s possible. And that’s how I end the book.”

A Simple Man – Kasrils and the Zuma Enigma, by Ronnie Kasrils. Published by Jacana Media. 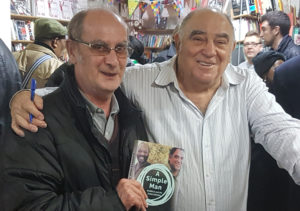 IN a dramatic escape, a young South African couple evaded an Apartheid security dragnet and arrived in London.

It was the early 1960s and Ronnie and Eleanor Kasrils were among a handful of white members of the ANC’s armed wing. For the next two decades they were top ANC controllers, with a web of operations spanning Africa, the Soviet Union and Cuba.

From poky offices in Goodge Street and Rathbone Street, Fitzrovia, and their Golders Green flat, dodging surveillance by Special Branch, MI5 and Apartheid, they helped mastermind the London Recruits, a stunning military operation that dispatched British, Irish and European volunteers to South Africa with propaganda, intelligence and weapons.

Recently, the ANC and SACP honoured the London Recruits for turning the tide against Apartheid.