The Cap: ‘There’s life in the old girl yet’

The Black Cap Community is fighting to reopen the famous venue, as Ben Walters explains 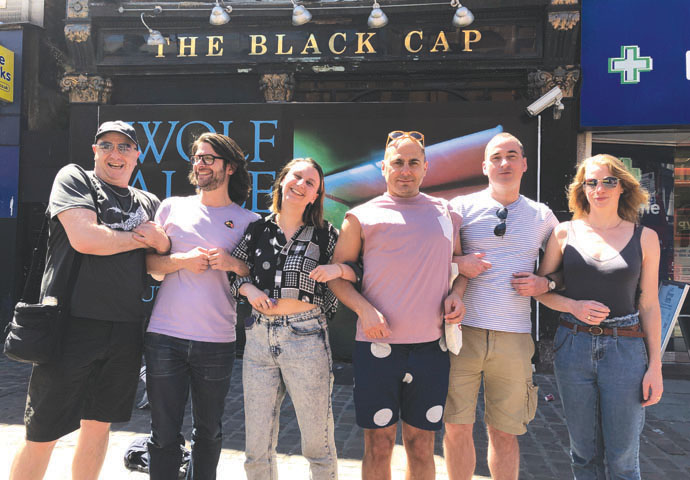 IMAGINE a colourful, welcoming, fabulous, community pub and cabaret in the heart of Camden Town.

As you might know, we had one for 60 years and now more and more people are working to bring it back, better than ever.

The Black Cap has been a hugely successful LGBTQ+ pub, club and cabaret venue from the days when being gay was illegal up to the day of its shocking and unnecessary closure in 2015.

Then the Cap was still buzzing but its then-owners were denied permission to convert the upper floors, which are vital to the venue’s operation, into luxury flats. So they closed it.

Our community group sprang into action to defend the Cap. Six years on, we’re still going strong, and recent developments give new hope to reopening our beloved venue.

The vigils, held every Saturday outside the shuttered venue until the pandemic, has been our way of celebrating the Cap and keeping its spirit alive while its doors are closed.

The Black Cap is known as a glittering beacon for everyone in Camden – whatever their gender or sexuality – who values difference, originality, love and togetherness.

Part of this is about valuing our history. There are only a tiny number of LGBTQ+ sites like the Cap whose history dates back to when being gay was illegal.

But even more it’s about the present and the future. More than half of London’s LGBTQ+ venues were lost in the decade before the pandemic, while our struggles with mental and physical health, housing and hate crime have sadly remained on the rise.

We need our own spaces more than ever; partly for safety and relief but also because these are places where we can evolve new ways of being in the world together, ways that offer better futures for everyone by taking seriously the needs of the most vulnerable, including the need for pleasure.

This month we learned that the people who closed the Black Cap have moved on and new owners are now in place.

So far the new owners have told us only that they’re exploring their options but we are cautiously hopeful that this could mark a turning point.

Camden Council has been powerfully aligned with the Black Cap community in affirming key protections for the site.

As an Asset of Community Value, the whole building must be used as an LGBTQ+ pub, club and cabaret venue. These measures are strongly backed by the Mayor of London’s office.

In short, the new owners’ obvious path is to work with the community, Camden, and City Hall, to reopen the whole building as the LGBTQ+ pub, club and cabaret venue it should be, and which our community so desperately needs.

We are confident of the Cap’s continued commercial viability and have developed constructive plans for several possible approaches, which we have already offered to discuss with the new owners.

We hope they will be open to this as a winning approach for everyone.

The apparent alternatives – depressingly familiar over the past six years – would be to try to defy the site’s legal protections to maximise profit, or let the place sit and rot.

We believe such an approach would be a further slap in the face to the LGBTQ+ community and to Camden as a whole.

The Black Cap is a unique Camden Town icon known around the world. While its closure has been heartbreaking, we are incredibly proud of the passion and positivity with which we have kept its flame burning.

We can’t wait to see you for a drink at the bar – soon, we hope – and in the meantime, for a laugh and a chat at the vigil.

There’s life in the old girl yet!

• The Black Cap vigil returns at 171 Camden High Street on Saturday June 26 at 2pm, followed by a picnic at Castlehaven Open Space (between Castlehaven Road and Hawley Street).