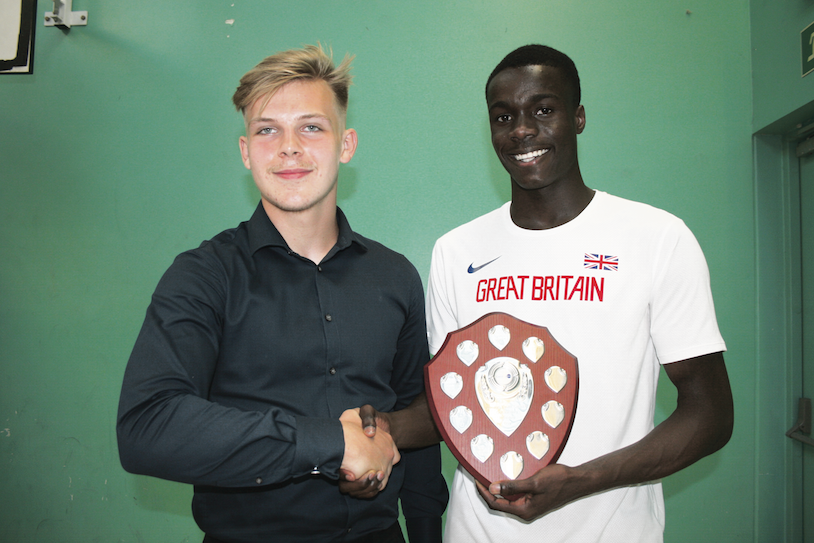 POWERFUL athlete Edwin Zaimovic will be rowing for gold this weekend when he represents England at the School Games Finals, which are being held in Leicestershire.

More than 1,400 young athletes from all across the country will converge at Loughborough University to take part in the annual multi-sports event, which is supported by National Lottery funding from Sport England. Edwin, who lives in Swiss Cottage, was selected by British Rowing to represent England Team South after winning the National Junior Indoor Rowing Championships at Lea Valley in March.

He will now earn a place in the history books when he competes in the first-ever indoor rowing competition to be held as part of the School Games.

“I’m really looking forward to it, it’s going to be an exciting weekend,” said the 16-year-old. “Obvously it’s the first time I’ve been so I don’t really know what to expect, but I’ll be giving it my all to come home with a medal.”

Edwin’s indoor rowing career started in somewhat fortuitous fashion when he was asked by Jamie Histed, one of his teachers at Haverstock School, to take part in a competition as a bit of fun.

The event was organised by Active Row, which provides schools across London with indoor rowing machines, full-time coaches and access to on-water rowing. It was that additional support that proved key in Edwin earning an England call-up. “Six minutes can be an awfully long time when you’re on a rowing machine,” he said. “It teaches you not to give up. That life lesson can relate to everything, whether it’s studying or sport, you have to stay strong mentally and rowing does help with that massively. I don’t think I would ever have competed or found out I was decent at it without London Youth Rowing.”

Along with the gold medal he won at the National Junior Indoor Rowing Championships, Edwin also boasts two silver medals that he won competing for Camden in the indoor rowing championships at the London Youth Games. He was also named Outstanding Boy of the Year at the Camden Active Sports Awards in July, receiving his award from record-breaking Team GB high jumper Dominic Ogbechie.

At over 6ft and with shoulders almost as wide, it’s little surprise to discover that, while Edwin loves rowing, there’s another sport he’s hoping to excel at in the near future.

The teenager recently finished up at Haverstock School in Chalk Farm, and is now set to start his A-levels in chemistry, biology and maths at St Paul’s Catholic College in Surrey having been awarded a rugby scholarship through the London Irish Academy.

“I started playing at Hampstead Rugby Club and absolutely loved it,” said Edwin, who has since gone on to represent Middlesex. “I never really had the feet to be a footballer, but I was big and very quick, so quickly took to rugby. “For me sport has changed my lifestyle completely. At 10 years old I was chubby and lazy, you wouldn’t have seen me anywhere near sport. Sport gives you confidence, you’re engaged more, you meet more people and you make more friends. It is amazing and everyone should try and find what suits them.”

HIGH jumper Dominic Ogbechie was at it again on Saturday – this time leaping to top spot on the winners’ podium at the Under-17s England Championship at Bedford.

The Highgate Harrier, who lives in Hampstead, achieved a height of 2.18m to finish well clear of Sam Brerton of Newquay, who finished second with a height of 2.11m. The gold medal continues a remarkable year for the 16-year-old.

In February he became the youngest Briton to clear seven feet when he jumped a massive 2.22m to set a new Under-17s world record at the English Indoor Championships. In July, Dominic, who is trained by Highgate Harriers coach Marius Guei, also won gold for Team GB at the European Under-18s Championships, clearing a height of 2.16m.