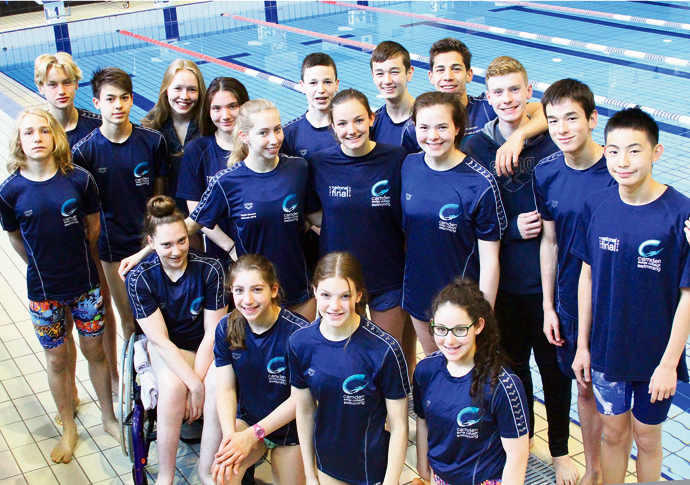 A SUCCESSFUL squad made up of swimmers from across Camden and Islington have dived back into the pool following a deserved break.

Young swim stars from Camden Swiss Cottage Swimming Club will be looking to build on their previous performances, which saw them cap off a memorable season with a series of unprecedented swims at two national championship meets.

Ellie Simmonds, Ally Larson, Brandon Biss, Lauren Brantley, Leo He, Charlotte Hyde, Alexis Lambropoulos, Ella McEver, Leah O’Connell, Jackson Olin, Anna Podurgiel, Georgina Winters and Grace Wylie all took to the pool for the British Summer Championships, which were held in Glasgow in July, after being ranked in the top 20 fastest swimmers in the UK in their respective age groups.

The club returned from the competition boasting a total of four medals having competed in 28 British national finals. Simmonds, 25, won gold in the 400m freestyle, while Larson, 19, made three trips to the podium, finishing second in the 200m butterfly and third in the 200m and 400m individual medleys.

Alexis Lambropoulos, 15, finished things off with a third-place finish in the 100m freestyle.

And the success didn’t stop there, with a strong contingent from Camden Swiss Cottage winning a mighty medal haul at the Swim Wales National Summer Meet, which were held in Swansea.

Lucas Bohm won gold medals in the 50m freestyle and the 50m and 100m breaststroke.

The 12-year-old also scooped a silver medal in the 200m breaststroke.

There were also silver medals for teammates Leonardo Brero and William Chen.

Brero, 12, finished second in the 800m freestyle and the 400m individual medley, while Chen, 15, finished in second spot in the 200m backstroke.