Reluctant Surrealist, the eccentric Eileen Agar is the subject of a new book and forthcoming exhibition

EVEN by Surrealists’ standards, artist and photographer Eileen Agar’s childhood was unconventional.

Born in Buenos Aires in 1899, to a Scottish industrialist father and American biscuit firm heiress mother, she enjoyed a privileged and bohemian life growing up in a home that she recalls was “full of balloons, hoops and St Bernard dogs”.

She and her two sisters were dressed in furs by their mother, not for warmth, but to show off the family’s wealth.

This ostentatious display was also adopted when the family would make their regular trips to Britain.

Among their suitcases and trunks, Agar’s mother insisted they had to bring two essentials: their own cow for fresh milk and an orchestra so they would always have music.

These eccentricities would inevitably have a lasting impact on Agar, who is the subject of a new book and a major retrospective at the Whitechapel Gallery.

Agar would become associated with the Surrealists and in 1936 she joined the British Surrealist Group and signed their inaugural manifesto.

Agar’s work includes photography, painting, collage, sculpture (which often included jewels and found objects), and even ceremonial hats. Of the latter, one called Ceremonial hat for eating Bouillabaisse is an extraordinary concoction of tree bark, coral, starfish, shells, a fishbone, a large bead, and a piece of a jigsaw puzzle. Now in the Victoria and Albert Museum collection, it was worn by Agar in old age.

One of her most famous works, The Angel of Anarchy, is a plaster head covered in fabric, feathers, sea shells, jewels and found objects.

Throughout her career, Agar combined elements of Cubism and Surrealism and referenced classical art, ancient mythologies, sexual pleasure, reproduction issues, the natural world and her own biography.

Her early artistic inspiration came from the illustrations of Edmund Dulac and Arthur Rackham.

But it was while studying in England (the family moved here permanently in 1919) at the beginning of the First World War, that she was introduced to the artist Charles Sims, who in turn showed her the early works of Paul Nash. 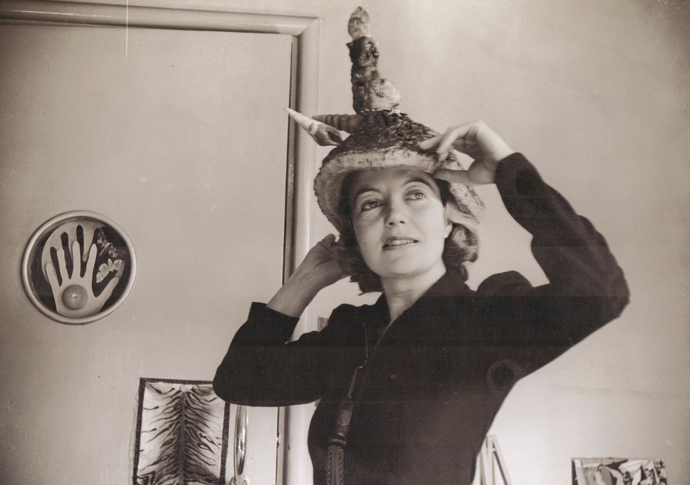 It would be a pivotal moment in her life.

And she took oil painting classes at the Byam Shaw School of Art in Kensington. But stifled by what she regarded as the academic approach there, she begged her family to let her study elsewhere. Her mother was furious.

So Agar packed her bags and caught a train from Paddington station bound for Cornwall leaving a note for her parents saying she would stay with a family friend.

To celebrate her “new freedom!” as she put it, she shaved her head.

After studying part-time at the Slade School of Fine Art under Henry Tonks and alongside Rex Whistler and Cecil Beaton, she went on to travel to Paris and Spain with fellow Slade student, Robin Bartlett. They married in 1925 and in that same year Agar destroyed most of her art work.

Not long after, her father died leaving her a small inheritance which would sustain her for many years.

Then, in 1926, Agar met the Hungarian writer, Joseph Bard.

The pair would embark on a passionate affair and eventually marry.

By now she was recognised by and friends with the leading artists and writers of the day.

She and Henry Moore would regularly visit the British Museum together, and her circle included Ezra Pound, Dylan Thomas, Picasso, André Breton, Dora Maar, Man Ray, Roland Penrose, Lee Miller, Paul Nash and Paul Éluard (the latter two she would have affairs with).

She was photographed by Cecil Beaton (with whom she was at Slade) and Lee Miller, who lived in Downshire Hill, Hampstead, with the artist and Surrealist, Roland Penrose.

It was not until 1933 that Agar had her first solo exhibition at the Bloomsbury Gallery. She also became a member of the London Group, formed from the merger of the Camden Town Group and the Fitzroy Street Group.

Despite her distinct reservations about being called a Surrealist, in 1936 she was one of the only British women included in the International Surrealist Exhibition at New Burlington Galleries in London, exhibiting alongside among others Salvador Dali, Marcel Duchamp and Pablo Picasso.

This most reluctant of Surrealists, who died in 1991, once commented: “I surround myself with fantastic bric-a-brac in order to trigger my imagination. For it is a certain kind of sensitive chaos that is creative, and not sterile order.”

• Eileen Agar. By Laura Smith, Eiderdown Books, £10.99 and can be bought at www.eiderdownbooks.com/shop
• Eileen Agar: Angel of Anarchy is coming soon to the Whitechapel Gallery.