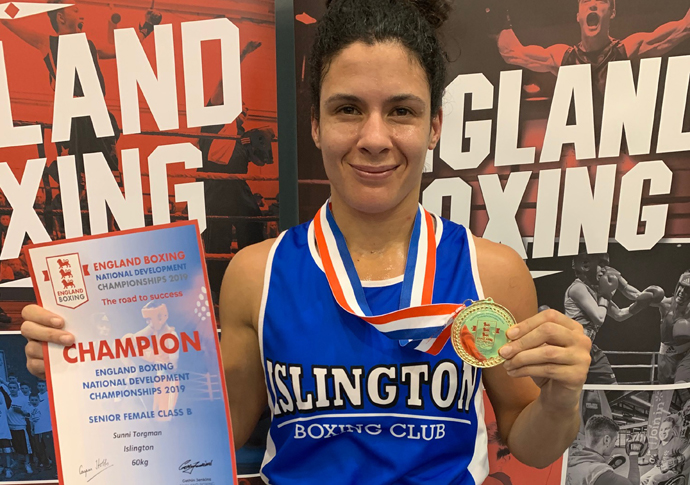 THIRD time proved to be the charm for Sunni Torgman on Saturday when she was crowned England National Development champion.

After two near-misses, the Islington Boxing Club senior finally struck gold in her third successive appearance at the national finals.

Competing in the Under-60kg Female B Class division, Torgman stopped Premier ABC’s Michelle Cox in the third and final round at the Spiceball Leisure Centre in Banbury, Oxfordshire, to bag the elusive title.

“Sunni’s relentless pressure on her much taller and rangy opponent throughout the contest was making her the clear winner in every round,” said Islington’s club manager Reggie Hagland.

“The referee gave Cox a standing eight count in both the opening and last rounds before rightly waving the contest off.

“Everyone at the club is happy for Sunni – she’s had plenty of ups and downs in boxing and is a very popular person inside and outside of the club.”

Islington BC went into the finals hoping to land a hat-trick of gold medals, but that wasn’t to be as Tessa Jones and Ruhel Miah were both beaten by the tightest of margins in their respective bouts.

Competing in the Under-51kg Female A Class division, Jones lost out to Frankie Hart, who was representing the Army, through a 3-2 split decision.

Miah, who was boxing in the Under-56kg Senior B Class division, also lost on a 3-2 split decision following an entertaining contest against Nyall Berry O’Dells ABC.