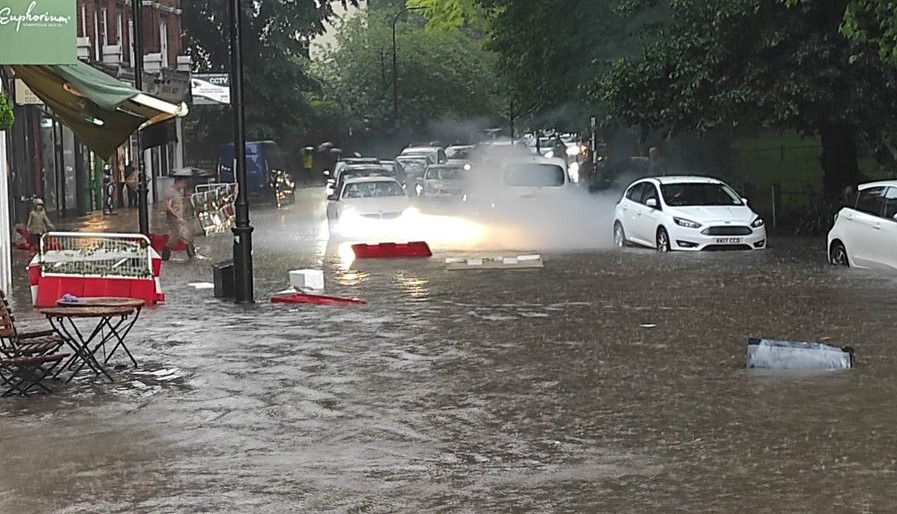 The park in Primrose Hill was so drenched that people were seen paddling and swimming in the water.

But it was no fun for people trying to get home as London Overground trains were cancelled and Euston was brought to a standstill.

The Winch community centre in Swiss Cottage reported serious damage in its basement, while the 02 Centre on Finchley Road was forced to close.

Meanwhile, scores of residents and businesses were reporting flooded buildings, with reports that drains had quickly become blocked.

South End Green was among the worst hit areas with firefighters called to help piggy-back Hampstead Heath walkers to safety.

Max Leach, who was in South End Road at the height of the downpour today (Monday) around 5pm, said: “People were working together to unclog drains and helped push a car out that had gotten stuck. Once the drains were cleared the water levels went down pretty fast.”

He added: “All the water has drained. Good joint effort by locals to unblock the drains.” 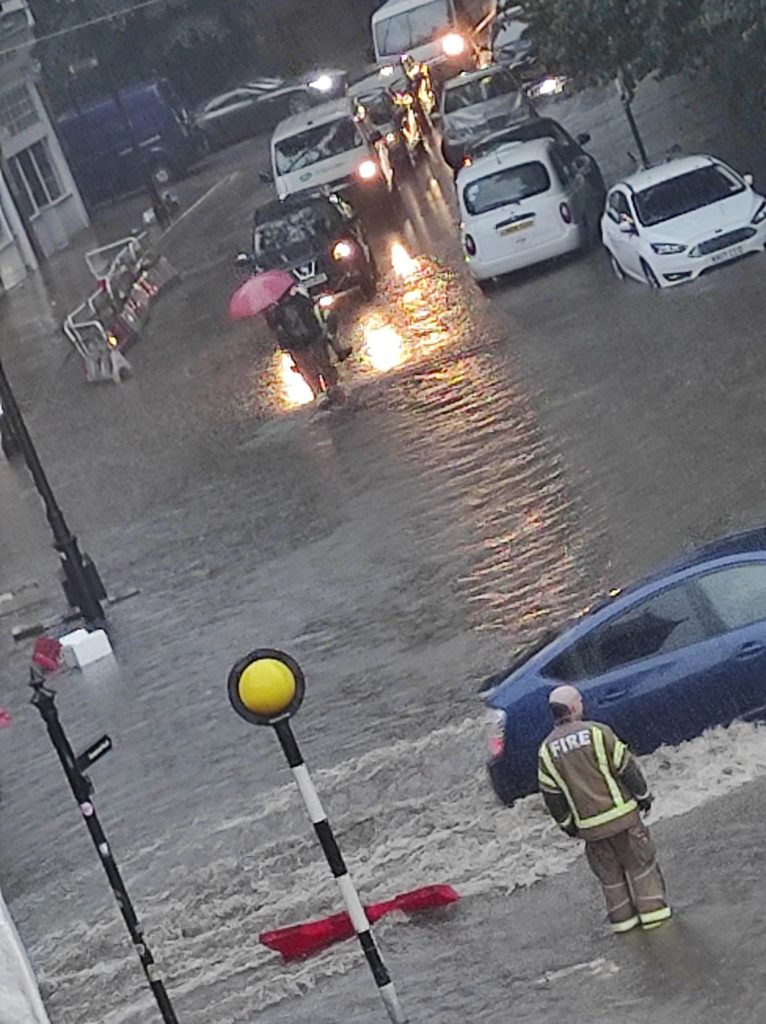 In nearby South Hill Park residents reported severe damage after the deluge saw waters pour down into homes off Hampstead Heath.

The Paradise Indian restaurant in South End Green had to close for the night after water came in several inches high.

Owner Wasel Ali said: “We were fully booked tonight, everyone’s coming out the day after the football. We’re still open for takeaway.”

He had called in a cleaning firm, which had began working on Monday evening to clear the effects of the flooding. “I think the drains were blocked up by all the silt,” he said.

“It probably last happened 30 years ago. It’s not too bad, but feels like another hurdle after Covid and then it’s been quieter when the football’s on. We’ll be fine.”

The restaurant is expected to be back open tomorrow. 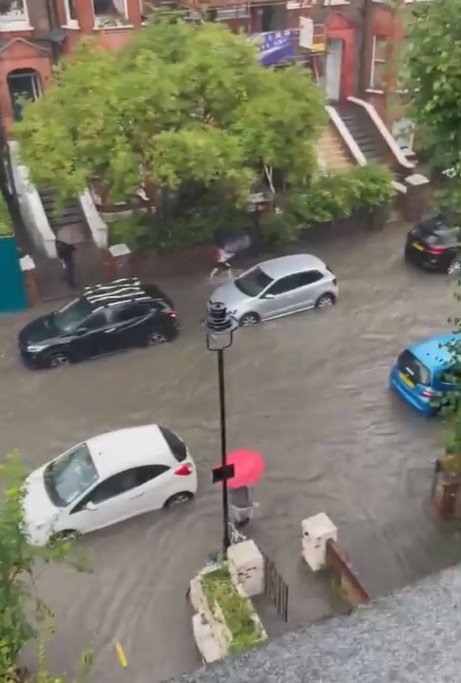 Goldhurst Terrace on Monday afternoon [@lunanana__]
Meanwhile, shops in Chalk Farm and Swiss Cottage reported damage while blocked drains in West End Lane, West Hampstead, transformed the road into a river near the fire station.
In Primrose Hill, swimmers took advantage of the sudden downpour by taking a dip in a huge pool that had formed the bottom of the park, near Albert Terrace. 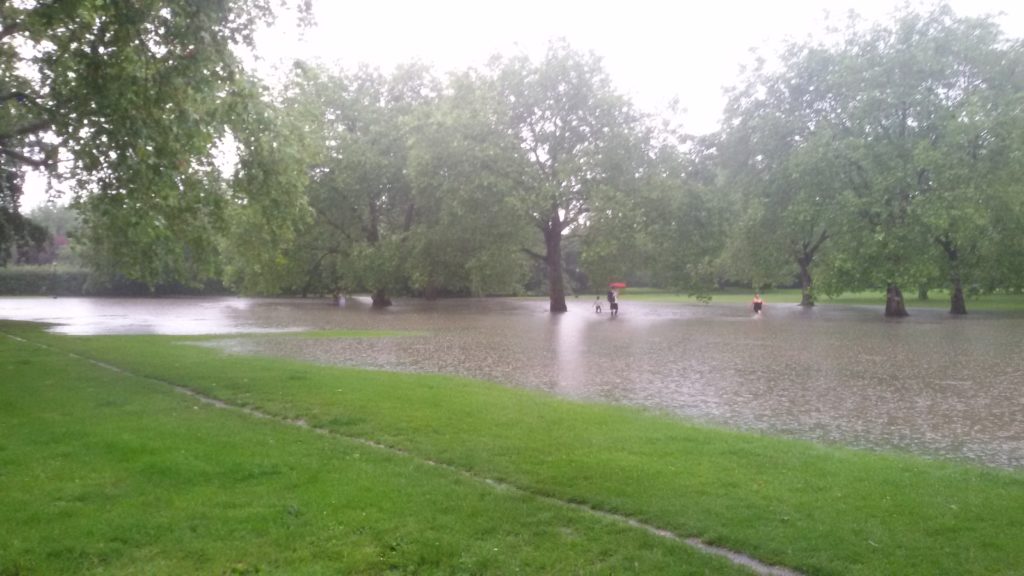 A flood in Primrose Hill

Ron Davies, who was at the bus stop, suggested that the water in the park may have come from the Regent’s Canal. 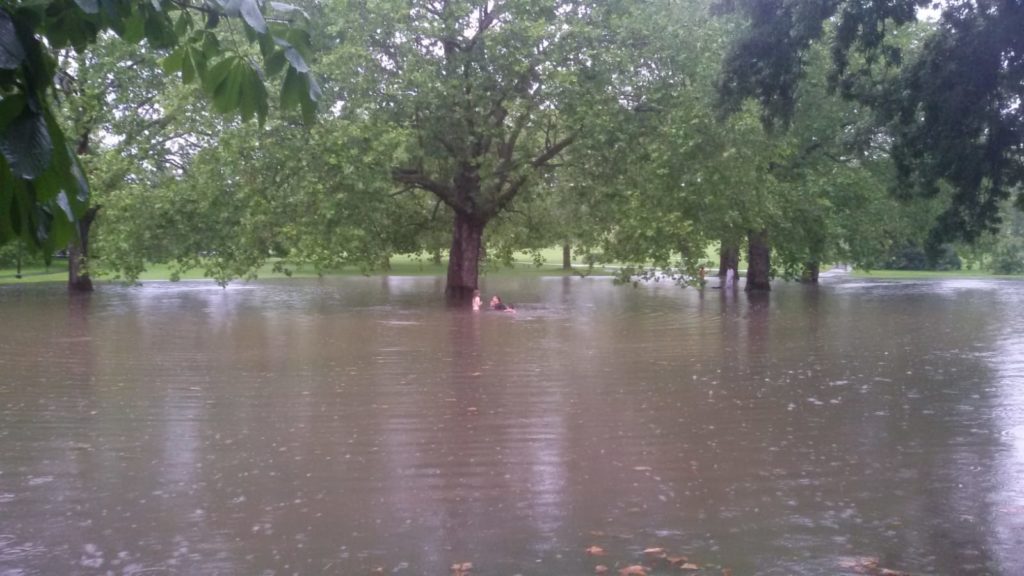 But this had not deterred the group of swimmers in the park, who said they stripped down to their underwear and jumped in on a spontaneous whim.

Camden Council said it has received a high level of calls for help.

“We’re currently working with emergency services in locations across the borough to deal with flooding from burst water mains and surface flooding resulting from heavy rain,” a statement said earlier this evening.

“Our teams are out clearing drains in high demand areas and a liason officer is supporting residents. We’re also getting though a high volume of calls to our call centre and helping residents who need us. If you’ve been affected by the floods and need our support call us on 020 7974 4444,”