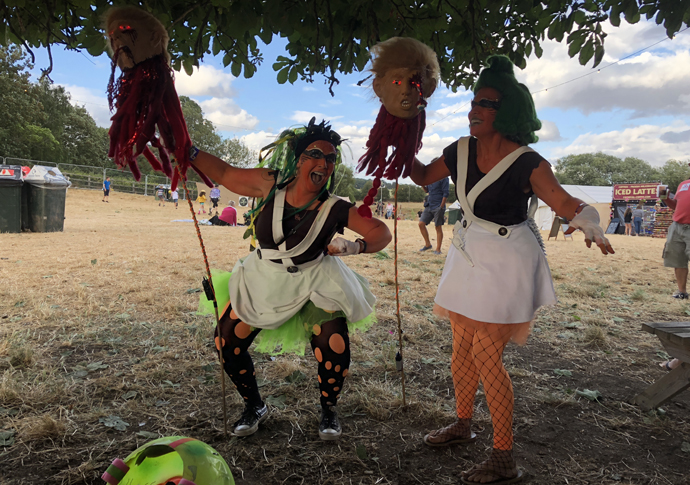 SET in the grounds of Standon Lordship, a beautiful Hertfordshire small holding nestling in a sun-kissed valley, Standon Calling is a family friendly festival that shows England at its playful best.

No doubt in part pulled in by the availability of day tickets and the start of the summer holidays, Standon attracts a large measure of locals. Small enough to bump into your friends, it’s also big enough to cater for a diverse range of musical preferences and keep happy the range of tastes that any multi-generational family day out encompasses.

While showing signs of the slight chaos that any festival brings with it – and some disappointments such as a swimming pool that lost its lifeguards and failed to open on the hottest day of the year – Standon is an easygoing festival that, at half an hour by train from Tottenham, has become a prime spot for lazy Londoners to get their out-of-town festival fix for the summer.

Sequins and sparkles are standard, with teenagers and adults alike making liberal use of the on-site glitter bar and £10-a-pop vintage dress stall. That helped create many a blushing, and often bearded, bride over the weekend. Taking it a step further, fancy dress is also full on and popular, culminating in a competition on Saturday morning that floods the grounds in the weird and wonderful creativity – my personal favourite being the “Trumpalumpas”, bearing the head of the man himself.

While you are unlikely to find much in the way of Drill, the headliners show the range covered by Standon with the likes of indie-pop-rockers Tom Walker and George Ezra, popstar Paloma Faith, downbeat indie/trip-hop from Morcheeba and Goldfrapp or alt rock from Black Rebel Motorcycle Club. Festivals are really places for musical discovery and, away from the headliners, on the main stage the geodesic dome of the Groove Garden tent standout sets from the likes of Jalepeno records ably delivered the funk, while Lex Luca dropped house and techno for the ravers. Working its way through such a musical smorgasbord, Camden’s own Digit Soundsystem dropped bike-based beats throughout.

The must-see for your correspondent was, however, Hollie Cook. Hollie brings the perfect accompaniment to a blazing hot summer with her self-branded “tropical pop” sound. Strangely enough, one that takes me back to those long hot summers of my childhood, in Holloway. Mainly playing tracks from her album, Vessel of Love, which was released in January and hit number one in the Billboard reggae charts, she certainly lit up a suddenly damp day. While a few of her tracks like Lunar addiction and Far from me tap a deeper trip-hop feel, those such as Freefalling represent her core “tropical pop” sound. Channelling the spirit of Janet Kay with a sun-drenched, dub-reggae set list for the day, she bounced around stage with a smile that, luckily enough, brought her own sunshine, as the heavens opened and the crowd huddled under scant cover.

Your correspondent was lucky enough to catch up with her prior to the gig and while the scion of a musical family that includes Sex Pistols drummer dad Paul Cook, mum Jeni sang for Culture Club and Boy George is her godfather. she remains refreshingly unaffected by the assumption of expectation that could engender. Rather, Hollie was full of appreciation for the success of her third album and a sell-out US tour from which she has just returned to her native West London. “It’s been quite amazing. I didn’t know if the day would come when I would be quite this busy”. With recently released collaborations including The Nextmen and old friends from West London Gentlemen’s Dub Club (Pound for Pound/Spooky) and the Orb (Rush Hill Road LP) it certainly has been a productive year.

While the future looks set to hold a lot of touring – including another festival with Boomtown this week and a full UK tour, home looks set to remain London as family and friends keep her rooted and loving the social life that inspires her: “Touring so much over the last ten years has really kept my love of London pure – for a while I felt a bit stuck, but to go away – absence makes the heart grow fonder! And you know what, really, hanging out with people that I love is the thing that ignites me emotionally. Most other things are quite pointless unless you have people that you really like and care about!”

Standon has the feeling of a friendly village about it – people return year in, year out. Camping conditions are good – if you could get your tent pegs into the rock hard, baked earth – and there is much to do away from the main music acts. While charging the usual inflated festival prices the food is good and varied from fish and chips or pies to vegan jackfruit curry. A Pad Thai stood out as a tasty and generously portioned (if lacking in veg), while a braised pork Bao was perfectly steamed and managed to stay on the line where the thickness of the bun can veer into stodginess or if too thin leave one needing more. The filling was melt in the mouth meaty sweetness that definitely demanded a return visit – a bit like the festival in general.