Stage-struck out of theatre history?

In Black History Month, Angela Cobbinah considers the career of the classical actor Ira Aldridge. Shamefully neglected, a new book on the pioneering black performer seeks to restore his reputation 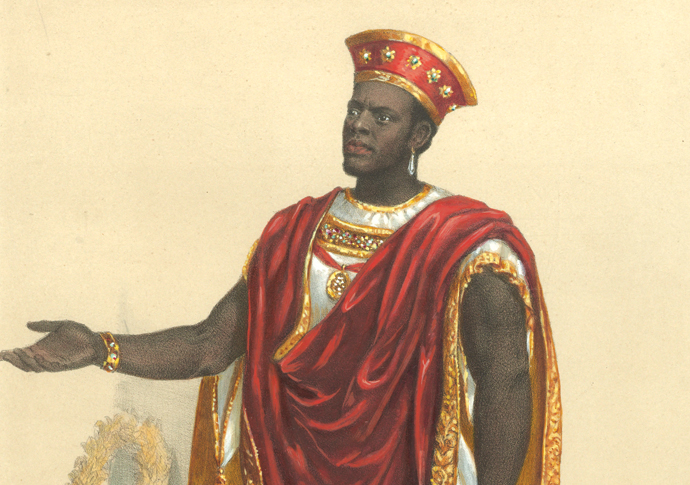 IN the mid-19th century, London’s theatre world was abuzz with the name of Ira Aldridge, the country’s first classical black actor, whose impassioned acting style commanded huge performance fees in line with the numbers who flocked to buy tickets to see him in action.

In the rest of Europe he was idolised for both introducing audiences to Shakespeare for the first time and influencing the development of realist theatre as later advocated by Stanislavsky.

Following several sell-out tours on the Continent, he earned many honours and awards, including a knighthood in Germany, and was given a state funeral in Poland, where he died suddenly in 1867, aged 60.

Yet, as noted by Martin Hoyles in his latest book on Aldridge, the American-born superstar has been reduced to a footnote in the history of 19th-century theatre and is included in only a handful of university and drama school courses in the UK.

One senior lecturer in theatre at a London university told the author he’d never heard of him and another at a northern university thought Ira Aldridge was a woman.

“The neglect is completely scandalous,” Hoyles writes, going on to quote Russian scholar Sergei N Durylin that “one may get the impression that the European and American theatre scholars have joined in a conspiracy of silence against the famous black tragedian”.

Durylin authored a biography of Aldridge in 1940 but the first one in English did not appear until 1958, more than 90 years after the actor’s death.

Since then the picture has improved, but only a little. Hoyles, a former drama student at Bristol University, attempted to redress the balance with a book celebrating his life in 2007.

This time round, he concentrates on Aldridge’s various roles, his acting craft and the words he spoke, begin­ning with Othello, his signature role, and inclu­ding Macbeth, Shylock and Richard III, white characters that he also played to great acclaim.

But first we are treated to a quick trip around Aldridge’s extraordinary life. Born in New York in 1807, he developed a love of acting with the African Grove Theatre, but after the entire cast was arrested for daring to perform Shakespeare he decided that there was no future for him in the US as an actor and made his way to England in 1824.

The following year, he performed Othello at the Royal Theatre in London’s East End to favourable reviews.

His stock rapidly increased and “people flocked to see him out of curiosity, often to laugh or even scoff but they usually went away astonished by his acting skills”, says Hoyles, who lives in Gospel Oak.

Soon his image was on playbills everywhere and he was asked to sit for one of the most famous portrait artists of the day, James Northcote.

Possessing a phenomenal memory with the energy to match, and able to do comedy as well as tragedy, he performed on average one new role every month during his first six-and-a-half years on the British stage, particularly in the provinces and in Ireland, where the press was more favourably disposed towards him.

In 1853, he embarked on a European tour where he captivated audiences with his naturalistic acting, which in turn had an influence on a new generation of actors and directors.

Although he was one of the highest paid actors in the world, he never forgot his roots, sending his money to American organisations working to free slaves and on one occasion buying the freedom of an escaped slave family who had been re-captured.

Tilting his book towards drama students and actors, Hoyles sees it as part of a campaign to get such an important historical figure the recognition he deserves.

“If more drama students realise his achievements, they might demand that he is included on their courses, so that eventually he will become a household name in British theatre studies,” he concludes.