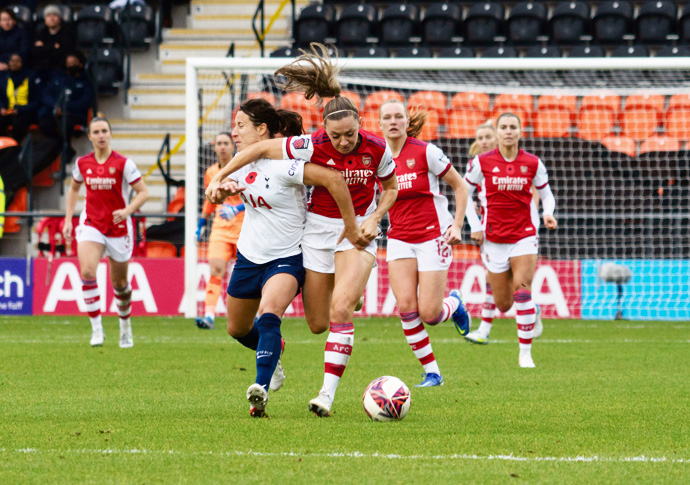 WORKING alongside the big names of bygone Arsenal teams as they won a clutch of titles did much for Rehanne Skinner’s development as a coach.

But the 42-year-old did little for her old club on Saturday when her underdog Spurs became the first team in the FA Women’s Super League to take points from the Gunners.

Ahead of the most tightly contested north London derby since Tottenham reached the top flight in 2019, Skinner had spoken about her experiences as Laura Harvey’s assistant a decade ago.

“We were in the latter stages of FA Cups as well as semi-finals [of the] Champions League, Conti Cup finals, so the number of games was phenomenal,” she told the New Journal.

“That in itself was obviously a really good experience to tee me up for managing in this world that we’re in now.”

Together, Harvey and Skinner oversaw an Arsenal side that included Julie Fleeting, Rachel Yankey and Ellen White, with Kim Little, Alex Scott and Kelly Smith also becoming part of the line-up.

By the time Harvey left to coach Seattle Reign in the US in January 2013 and Skinner moved on to help Great Britain win gold at the World University Student Games, they had steered Arsenal to six major trophy lifts.

“At that time in my career, it was really, really good for me to see what that side of it looked like and to help me understand what it was going to take to get to that next level, and work with big personalities and all the different management pieces that come with that,” Skinner added.

The Gooners among the weekend’s 2,896-strong crowd at the Hive and the 900,000 watching the action live on BBC1 might have wished Skinner had benefited less from her time at Arsenal.

The visitors never gave up, but it took Vivianne Miedema’s perfect header at the death to save their blushes after Rachel Williams’ scruffy 65th-minute goal had set up a thrilling finale.

Afterwards, Skinner said she hoped the tightness of the contest would benefit the women’s game as much as it helped boost her fourth-in-the-table team’s growing reputation.

“We’re all on the same page, players, managers, we all want to make the game better, make it a spectacle and something that people want to watch and hopefully today has provided that,” she said.

Over in Manchester, another former Arsenal assistant piled the pressure on her old club, too. Chelsea manager Emma Hayes won the European trophy as Vic Akers’ No 2 in 2007.

And she was positively purring after her reigning champions blitzed Manchester City 4-0 to reduce Arsenal’s lead at the top of the table to one point.

Chelsea are set to host Swiss side Servette in the Champions League tonight (Thursday), but Arsenal boss Jonas Eidevall was in less buoyant mood ahead of their European tie at home to Koge last night (Wednesday).

The match would be Arsenal’s fourth in 11 days and, after losing key defender Leah Williamson to a “significant” hamstring injury, the Swede showed his frustration with the fixture list.

“We had a really tough week,” he said.

“No other team in the league has been asked to play with such a tight schedule that we did. It was almost inhuman.”

Arsenal are back on the BBC on Sunday with a visit to Manchester United, while Spurs will face West Ham and Chelsea host strugglers Birmingham City – those two matches will be live on the FA Player.