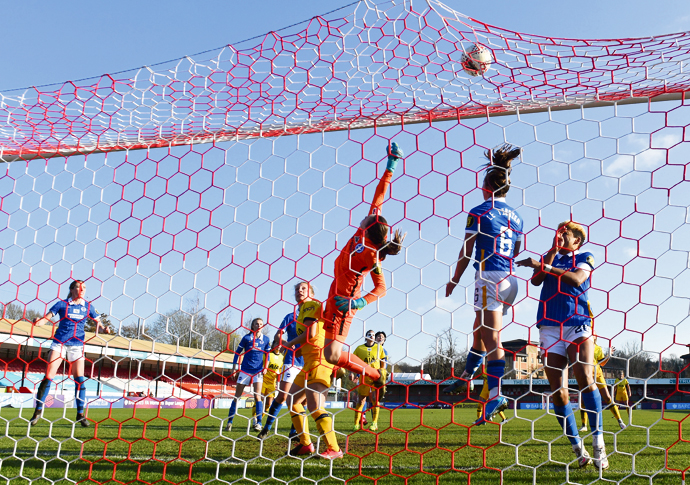 A 2-0 defeat against Brighton was Spurs’ fourth WSL defeat on the bounce. PHOTO: THE FA VIA GETTY IMAGES

AFTER a winning run under new boss Rehanne Skinner, Spurs seem to have lost their bounce.

As so often in football, it has come down to small margins, with one goal the difference in two recent FA Women’s Super League defeats.

Against Brighton at the weekend, they were undone by smart goalkeeping, a last-gasp clearance off the goalline and the woodwork.

Inessa Kaagman’s double ultimately put the visitors to the sword in Crawley, as a 2-0 defeat condemned Spurs to their fourth consecutive defeat.

Tottenham, who sit eighth in the 12-team WSL table, travel to Reading this Sunday. And with Skinner’s side still to face the top four teams, their run-in is looking unenviable.

The north London derby on March 27 will hold added spice, too, following the news that it is to be held at the Tottenham Hotspur Stadium.

Goals by Kim Little and Vivianne Miedema denied Spurs in front of a league record 38,262 fans when the two sides last met at the men’s ground in November 2019.

This time it will be a behind-closed-doors affair, but if Arsenal are still chasing a Champions League spot and Spurs safety, there could be plenty riding on the outcome.

The return of captain Kim Little was a fillip for Arsenal boss Joe Montemurro against Birmingham City on Sunday, as was a second 4-0 scoreline in just over a week.

Little, who injured her calf last month, came on just after the hour at St George’s Park, and afterwards Montemurro said: “We’ve just got to find that little bit more rhythm for her and hopefully we can get her right for the run home.”

A Caitlin Foord brace and goals from Vivianne Miedema and Lisa Evans ensured that the Gunners stayed in their groove with back-to-back wins.

Arsenal’s next date in the diary is the six-pointer against Manchester United, currently third in the table, on March 19.

The hope is that a postponed fixture with West Ham United can also be squeezed in.

Holders Chelsea go into Sunday’s Continental Cup final having survived a testing eight-day spell that saw them reach a Champions League quarter-final and remain in pole position in the FA Women’s Super League.

The Blues had beaten Atletico Madrid 2-0 in their round-of-16 home tie last week, despite playing 80 minutes with 10 players and conceding two penalties.

Substitute Emelyne Laurent levelled for the Spanish side in time added on, but the Londoners went through 3-1 on aggregate.

It topped off a week that had also seen Emma Hayes’ side keep their WSL title defence on track with a 2-0 win over West Ham.

Camden Town-born coach Hayes said her team looked “leggy” out in Italy as a result of their tough London derby and their 10-player test against Atletico the previous week.

“I’m really pleased to come through this knowing we weren’t at our best,” she told the press afterwards.

The challenge for the Blues now is to refocus ahead of the Continental Cup final against Bristol City at Watford FC’s Vicarage Road ground.

“This is going to be a fun final for the fans,” Hayes said.

“It’s no walk in the park for anyone, [Bristol] are quality, they really are, on the counter they’re absolutely brilliant.”

The Continental Cup final kicks off at 2.30pm and is live on BT Sport.

Tottenham’s clash with Reading on Sunday is on The FA Player at 12.30pm.