Angela Cobbinah talks to Ron Vester about photographing ‘one of the greatest reggae artists on the planet’, Lee ‘Scratch’ Perry 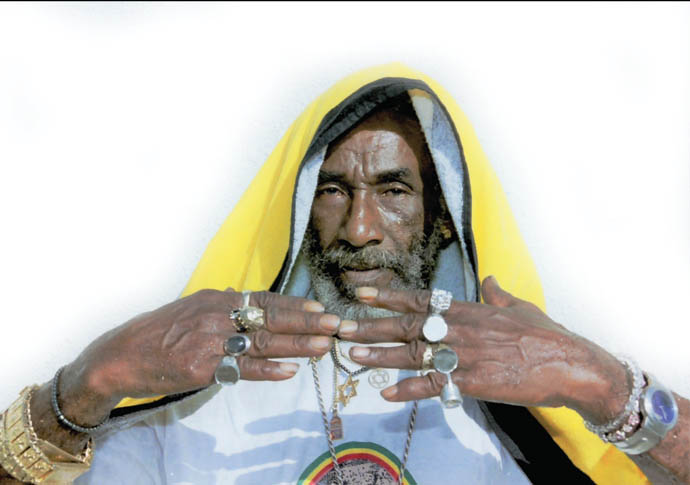 Ron Vester’s photo of Lee Perry… and that towel

IT was 10 in the morning and photographer Ron Vester was lounging about at his home in St Mary, Jamaica, when he got the call from Studio One boss Coxsone Dodd to get down to Kingston fast – Lee “Scratch” Perry was coming to visit.

“I picked up my camera, jumped in my car and drove the three hours to Kingston in great anticipation,” says Ron.

“Perry had not set foot in Studio One for 10 years after falling out with Dodd, so this was going to be a special occasion.”

Ron, who years earlier had travelled from England to work for the Jamaica Tourist Board, was now Studio One’s unofficial snapper, never quite believing his luck as he took pictures of the many stars that emerged from Dodd’s hit factory during the 1990s.

“I didn’t have a proper contract but every so often Dodd would take out a wad of bills from his back pocket and hand me some,” he recalls with a laugh.

It was now 2000 and Perry, who died in August aged 85, had long entered the music hall of fame as a dub pioneer with his sonic collages and adventurous production work with some of reggae’s biggest names, including Bob Marley and the Wailers, Junior Murvin and Max Romeo. He was also famous for his eccentric persona. He’d started out at Studio One in the 1960s as a singer, recording the single Chicken Scratch that gave him his nickname. But later he quarrelled with Dodd, probably over money says Ron.

When Ron reached the studios in Brentford Road, since renamed Studio One Boulevard, he sat under the lignum vitae tree in the front yard with legendary ska balladeer Chandley Duffus to await the great man’s arrival.

“Then this diminutive guy walked in, not much taller than five feet but looking great with a beautiful grin on his face and lots of jewellery. I went straight up to him and held out my hand, saying something cheesy like ‘I am a big fan of yours’. He looked at me vacantly and said ‘mi nah shake hands’, offering his elbow instead and headed for the office.

“Dodd was at his desk on the phone and Perry just took it off him, talking in riddles. Pure Perry. I started clicking. Then I suggested we go outside, where there was a fantastic white wall that had just been repainted.

“Suddenly Perry looked all shy and asked me what he should do, which really amazed me. I chucked him a towel and told him to put it on his head, just for something different.”

After the shoot had finished, Perry got hold of a hose pipe, turned on the water and grabbed Dodd’s hand to wash it, saying it was a ritual to mark their reunion, a jovial moment captured on camera.

The visit was over in a flash, says Ron, who now lives in Hampstead, but he and Perry’s paths converged several times after that.

“He was often in London doing concerts, especially at the Jazz Café. About five years ago, I asked him to sign some of the photos I’d taken of him that day at Studio One. He was more than willing but, unbelievably, neither of us had a pen.”

Ron left Jamaica after Dodd suddenly died in 2004, treasuring his memories of the country’s Motown in action, and the personalities involved, not least Dodd himself – “a millionaire music mogul who dressed in what looked like hand-me-downs”.

These days, his viewfinder is taking in an entirely different scene as he tramps across Hampstead Heath photographing whatever’s going on, including the arrival of the latest brood of cygnets each spring.
Was Perry as eccentric as they say he was?

“Yes, he was seriously eccentric, always raving and never seeming to make any sense. But he did all that to confuse people. When he talked straight, he made perfect sense.”

As for his contribution to musical history, he “was one of the greatest reggae artists on the planet”, declares Ron. “He was fantastically innovative, a genius in fact.

“When he first came to Studio One as a young man, like most people he would have been handed a broom before being handed the mic. But Dodd had this amazing ability of spotting talent and soon took him on board.”