It’s that time again... Oh yes it is! Time for a welcome round-up of festive fare on offer on a stage near you 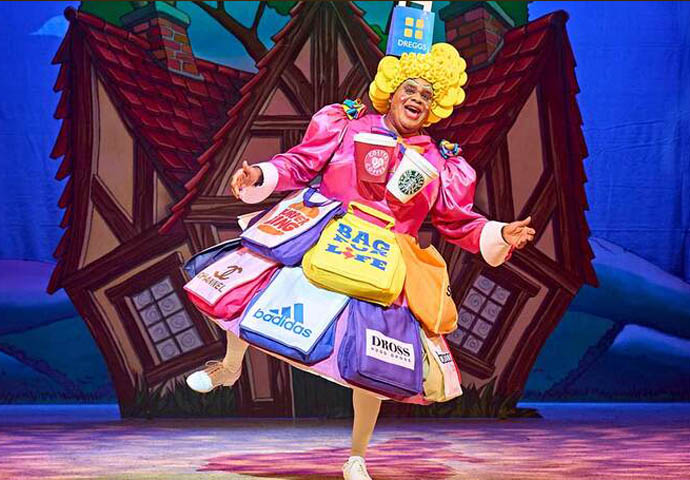 Clive Rowe is back at the Hackney Empire. Photo: Manuel Harlan

IT’S panto season! Clive Rowe returns to Hackney Empire for Jack and the Beanstalk. We join Jack on his journey up an enchanted beanstalk as he tries to outwit a rampaging giant with the help of his mum, Dame Trot. Until January 2. hackneyempire.co.uk

• TuckShop’s all-drag Dick Whittington is in the West End at the Phoenix Theatre. Join Dick on his thrilling quest to find adventure fame and fortune in the glittering streets of Soho, with his feisty and funny pussy cat. Will he be able to defeat villainous Queen Rat, aided by the Spirit of Soho, and save the city? Until January 9. thephoenixtheatre.co.uk/dick-whittington

• Stratford East’s community-oriented Red Riding Hood promises to be a lot of fun and is playing until December 31. stratfordeast.com 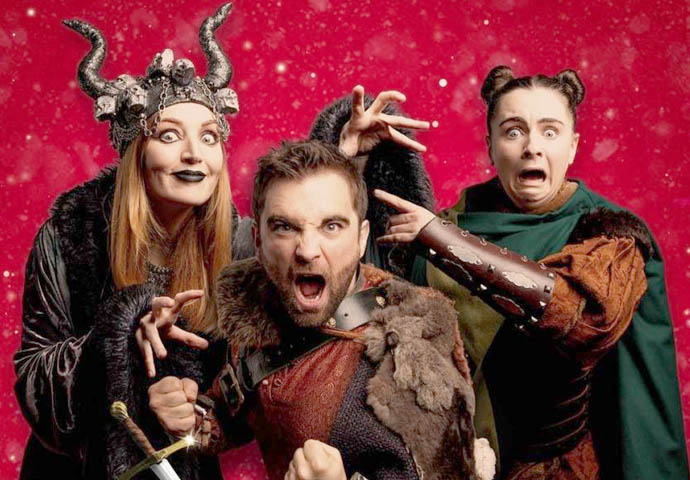 Beowolf: An Epic Panto at the King’s Head

• Charles Court Opera’s Beowolf: An Epic Panto is at the King’s Head Theatre until January 8. This medieval epic gets a wickedly entertaining makeover and is packed with musical numbers. Adult only performances 7pm; family groups at 3pm. kingsheadtheatre.com

• Vikki Stone’s sparkling new version of Aladdin is at the Lyric Hammersmith until Jan 2. lyric.co.uk

• Hex, a new musical based on Sleeping Beauty (book by Tanya Ronder, music by Jim Fortune and lyrics by Rufus Norris) will be at the National’s Olivier Theatre until January 22. For ages 8+.  nationaltheatre.org.uk/shows/hex

• Don’t miss Birmingham Rep Theatre’s magical production of The Snowman at the Peacock Theatre until Jan 2. All ages. sadlerswells.com 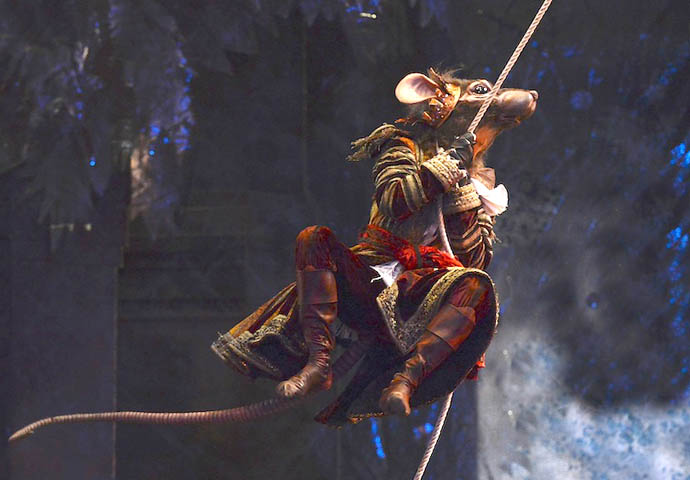 • Book now for Birmingham Royal Ballet’s spectacular production of The Nutcracker at the Royal Albert Hall from December 28-31. We join Clara in her family home. As midnight strikes, the magical Christmas tree grows, Clara’s nutcracker doll and his army of toy soldiers come to life, and she is swept away into an enchanting winter wonderland and the magical kingdom of the Sugar Plum Fairy. brb.org.uk/whats-on/event/the-nutcracker-rah-2021

• A Song for Christmas, written and directed by Alice Croft, will be in Covent Garden’s newest theatre space The POD. Connect with the family for this special celebration featuring a catalogue of much-loved music and stories. A Song for Christmas promises to get the festive spirit flowing for audiences of all ages. Until December 19. Box Office: 020 7240 0344 / www.iristheatre.com

The Bolds, at the Unicorn Theatre. Photo: Ellie Kurttz

• The Bolds, written and adapted for the stage by Julian Clary, will be at the Unicorn Theatre until December 31. The Bolds are like you and me. They live in an ordinary house in an ordinary street, and love to laugh. But there’s one difference… They’re hyenas! How long can they keep their beastly secret under their hats? Join Mr and Mrs Bold, Betty and Bobby, as they try to keep up their disguise. unicorntheatre.com

• Piers Torday’s There May Be A Castle has been adapted into a musical puppet show for Little Angel Theatre. On a frozen Christmas Eve, Mouse Mallory and family are on their way across the snow-white valley to their Grandpa’s house. A tale about love, loss and the power of the imagination suitable for ages 7+ Until January 23. littleangeltheatre.com 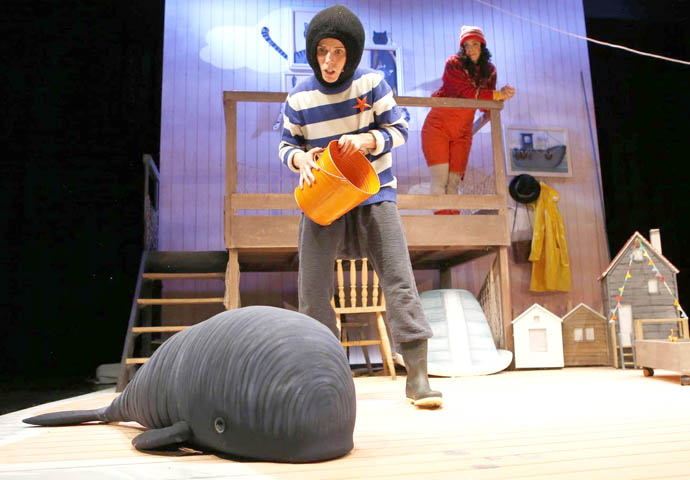 At Little Angel Studios is The Storm Whale based on the books by Benji Davies. Noi lives with his dad and their six cats by the sea. One spring, while Dad is busy at work, Noi rescues a little whale that has washed up on the beach during a storm. A friendship begins that changes their lives forever. Aimed at ages 4-8. Until January 30. littleangeltheatre.com 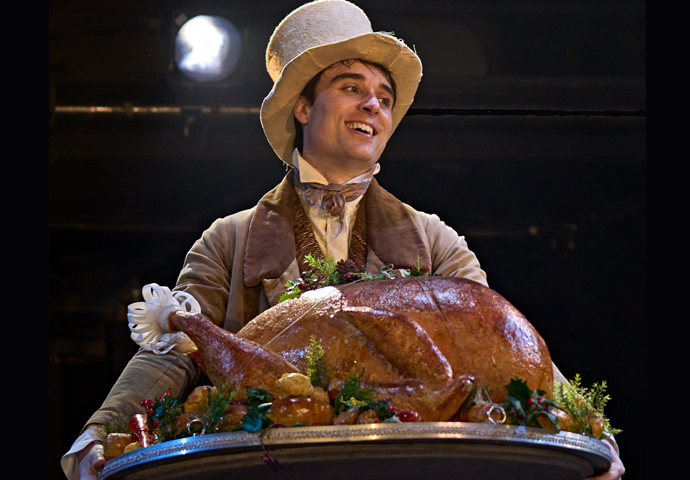 Oli Higginson (Fred) in A Christmas Carol is at the Old Vic. Photo: Manuel Harlan

• As well as the Old Vic’s stunning production of A Christmas Carol (reviewed on December 9) running until January 8, oldvictheatre.com, the Tiger Lillies’ musical cabaret version of Dickens’ classic shines a light on the poverty and depravity of the cold London streets and is at the Southbank’s Purcell Room until December 30. Age 14+ southbankcentre.co.uk. While Mark Gatiss’s spooky adaptation of A Christmas Carol is at Alexandra Palace until January 9. christmascarolonstage.co.uk 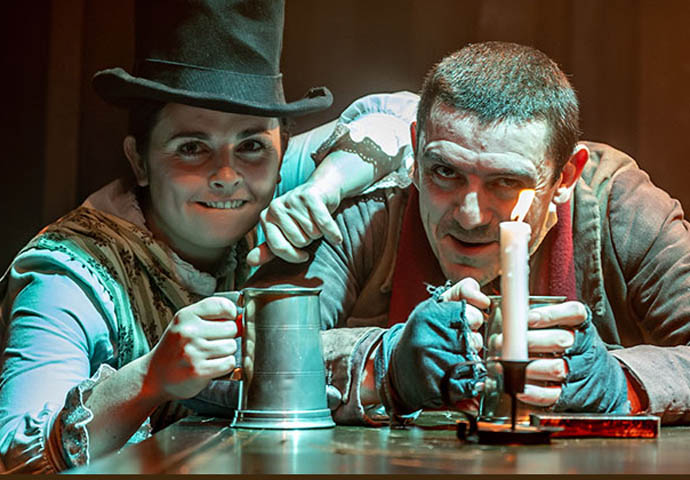 • The Park Theatre has something for everyone this festive season. In Park90 Cratchit reimagines Scrooge’s tale from the perspective of Bob Cratchit, who is taken on a time-bending journey through Christmas future. Until January 8. During the day, you can see Five Little Christmas Monkeys by Andrea Sadler and David Duffy, which encourages curiosity about numbers for ages 2-6. Join Sue the Zoo Keeper as she struggles to get mischievous Little Monkey to bed. With engaging puppets and music from dub reggae and funky rapping to classical ballet. Until December 22. In Park200 Julie Andrews fans can catch Julie Madly Deeply by Sarah-Louise Young which features songs from Andrews’ best loved musicals and explores the star’s fame and fandom. December 20-January 1. parktheatre.co.uk

• A Christmas Circus Fairy Tale is at Jackson’s Lane until January 2. Glass slippers, poisoned apples and magic lamps. But did the princess really need rescuing? Was the witch all that wicked? jacksonslane.org.uk

• Christmas is Ruined! by Kathryn Gardner is at The Cockpit until December 23. A jingle-belled, fun-filled adventure with a host of hilarious, larger-than-life characters, eye-popping acrobatics, and a generous dose of theatre magic. 3+. thecockpit.org.uk

• Finally, Five Guys Named Moe is Upstairs at The Gatehouse until January 16. upstairsatthegatehouse.com