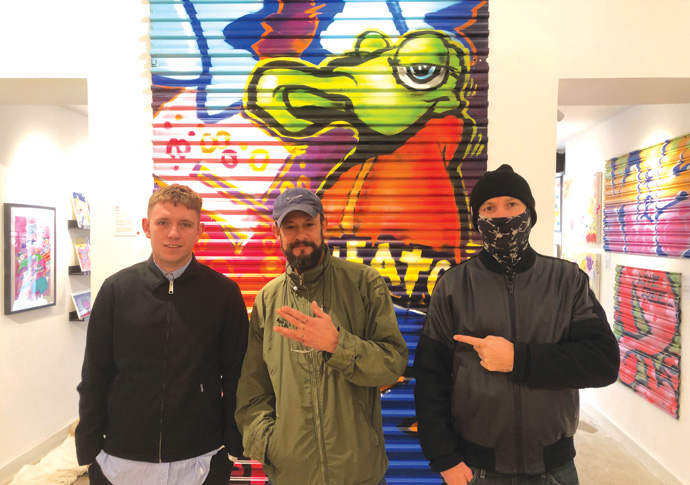 THEY have become unofficial landmarks and brightened up streets – all while their anonymous creators have risked arrest and injury.

And as the world of graffiti has become synonymous with an underground arts culture, it has survived and thrived since the 1980s. Despite the work being everywhere and by its nature accessible to all, the stories of those behind it are often shrouded in mystery.

Now pieces by 25 celebrated and prolific writers who have shaped a UK art form take centre stage at the Camden Open Air Gallery, a new arts space in Camden Town.

Writers Ollie Sylvester and P.i.C. – the signature of a writer whose longevity and notoriety is such, his real name does not appear in print – have curated a show of commissioned pieces on former shop-front shutters.

They have taken a form of art previously only seen on your high street shopping parades and cast it in a new light.

The gallery was founded by Finn Brewster earlier this year. Finn grew up living above the space – his mother ran the famous Camden Brasserie restaurant there – and became a souvenir shop before closing. Finn recalls how the gallery began after the success of an idea he had during lockdown in 2020.

As the usually bustling Camden High Street was deserted, he contacted a number of graffiti writers to create an exhibition using the shop’s shutters.

It brought a range of famous graffiti culture names back into Camden Town to display their talents in a free, public space – an idea at the heart of the movement.

And it was from this came the world’s first dedicated gallery show for a unique form that has shaped the streetscape of major cities – and in turn become a seminal influence in modern street art.

“We had opened the gallery, and had around 30 shutters or so in the outside exhibition,” says Finn.

One shutter, completed by PiC, was on a shop which had been at the centre of a dispute between the landlord and tenant. The shutter needed to be replaced, and instead of it being thrown away, Finn, Ollie and P.i.C. took an angle grinder to it and sliced the metal into sections.

Displayed as a one-off at the COAG, it ignited overwhelming interest from collectors.

“The demand was amazing – we could have sold it many times over,” says Ollie.

“We thought – OK, let’s do just a shutter exhibition.”

And the show offers a history of a sub-culture that has often been maligned and misunderstood.

“Graffiti is something everyone sees but doesn’t really know much about,” says Finn. “COAG started as a way of giving back to place where we grew up. Graffiti is a culture and movement so misunderstood and misconceived by the general public that we wanted to try and showcase what it’s really about.”

Using former shop shutters as their canvas, the Camden Open Air Gallery and artist collective Camdemonium commissioned new works. It led to PiC and Ollie contacting 25 of the most prolific artists ever to have worked in London and some new talents whose pieces they knew and admired.

“I have been doing graf since 1984 – I have been in the game for a long time and I have never stopped,” says PiC.

“This is my fourth decade in the scene, the same with Ollie, and we know the community. I got out my black book and called my friends. Everyone said yes.”

This included people considered to be the forefathers of the graffiti community since its UK inception: names such as Chane YDS, KIS 42 and Doze have been on the front of every train rolling on London’s tracks, roof spaces and parapets over West End streets, and blazoned across the infrastructure that form the urban bedrock.

“There are some real pioneers from the art from its first beginnings,” says PiC. “People who started in the 1980s have never exhibited in a gallery before or been recognised properly.

“Some of them have come out of retirement to work once more. They are iconic names.”

It has brought a sense of recognition from a mainstream way to access art – the traditional gallery show – for those who have displayed their work across London for years and been seen by thousands of people without ever hanging a piece inside before.

As well as celebrating this unique form of art, it offers the chance to learn a more about a sub-culture that is now ubiquitous around the world but still remains something of a closed and secretive world for the artists – partly due to the risks they take to create some pieces.

“We wanted to show UK graffiti culture in a way it had never been shown before,” says P.i.C. “The work has a different texture when they are inside instead of outside. You can see them in a new light.”

Ollie agrees – taking indoors such a traditional form of “writing” puts it through a different aesthetic filter.

“Everyone is used to seeing canvases and sculptures, but no one has seen anything like this in a gallery before,” he says.

“You can see the genre in a different way, and maybe it will help people notice shutter art outside more.”