‘Seeing the Colston Four walk free… this was a good day’

'This is not about eradicating our past – it's about understanding it' 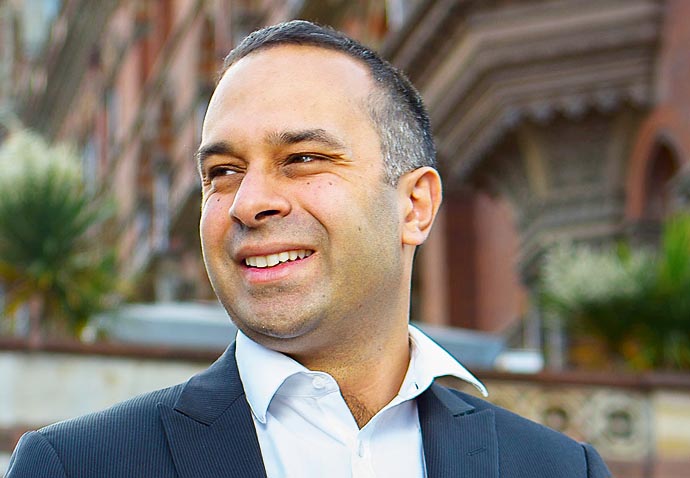 Raj Chada has worked at Hodge, Jones and Allen for 20 years

One of the lawyers who helped clear the slavery statue topplers in Bristol is the former leader of Camden Council. Raj Chada this week explained how he won’t let the outcome be mischaracterised. Interview by Richard Osley

A former leader of Camden Council helped the “Colston Four” walk free from court – and heralded the verdicts as justice for demonstrators who had toppled a “monument to slavery”.

Raj Chada said it was “one of the good days” in his professional life as a lawyer after the four acquittals and that the real crime was the fact a statue of slave trader Edward Colston had been allowed to stand in the centre of Bristol for so long.

It was famously hauled down amid Black Lives Matters protests in June 2020 and thrown into the city’s harbour.

Mr Chada, who led the council in 2006 before losing his seat, has worked for Hodge, Jones and Allen for 20 years – the firm has a history of giving advice on protesters’ rights and taking on their cases.

These have also included representing environmental protesters charged after acts of civil disobedience.

He had defended Jake Skuse, 33, – one of the four who had been charged with criminal damage in Bristol.

The case had been politically charged as Home Secretary Priti Patel had already said the toppling had been “utterly disgraceful”, while Labour Party leader Sir Keir Starmer described it at the time as “completely wrong”.

The defendants did not deny their involvement but said their behaviour was justified because honouring Colston was so offensive.

Speaking to the New Journal this week, Mr Chada said: “It was a crime that Bristol City Council knew that it caused offence and did nothing about it. They were made aware over many years and nothing was done.

“Not only did the statue not acknowledge his role in slavery – it had a plaque saying he was one of Bristol’s most virtuous and wisest sons.”

He warned that while the verdicts were cause for celebration, it was never a test case for other examples or a licence for wanton vandalism.

“Each case turns on its own events and its own merits,” he said.

“This wasn’t saying you can go around tearing down any building you like. This was about the offence of having a monument to slavery in the middle of Bristol.”

Mr Chada added: “People have wilfully mischaracterised the result as meaning people can do anything. Those are people who are engaged in a cultural war – who want you to think that now people can run around vandalising what they want.”

GB News presenter Darren Grimes asked on social media whether it might be all right to tear down the Karl Marx monument in Highgate Cemetery – if you disagreed with Marxism.

“It is legally illiterate and designed to scare,” said Mr Chada.

“And a response which is part of the reason why we can’t have a reasoned, sensible debate on issues like Britain’s past.”

Mr Chada said it was a credit to the radical origins of the firm, now based in North Gower Street, that it went into bat for defendants like Mr Skuse.

He said that everybody had the right to protest – and the right to defend themselves. And, as in this case, for them to choose to be tried by a jury of peers.

“I think we are all worried about attempts to put more curbs on demonstration. That’s not what a free democracy is about,” he said.

Mr Chada was only the leader of Camden Council for six months before losing his seat in 2006.

Before that, he had been the Town Hall’s housing chief but at that time there was no move to remove imperialist Cecil Rhodes’ name from an estate in Somers Town. That only happened last year after the racial injustice protests around the world led to a review.

“We should have been more conscious. It was not something that crossed my mind then – but it should have done,” he said.

“Things really changed with the George Floyd case. What are you saying to a young schoolchild or any person of colour in Bristol or Camden – if you ask them to walk past something honouring a man who thought their ancestors were not human?”

The statue to Colston had honoured his philanthropy, but he was hated for being the shareholder of a company which had shipped more than 80,000 black people, including children.

In his closing speech to the court, Mr Chada had compared the way the statue – now in a museum – had been thrown into the water to the way Colston was happy for dead slaves to be tossed overboard and written off as “wastage”.

The statue had been sent into the water because protesters would have otherwise worried that another crime – reinstalling the statue – would occur if it had just been left on the ground, he said.

Mr Chada also described the slave trade as a “genocide” – and recalled the words of a former Bristol councillor who had said “it would be like having a monument to Hitler”.

“This is not about eradicating our past, it’s about understanding it,” he said.

“Even changing the names of things is a way of recognising our past, and saying there are some things that happened that were unforgivable.

“We all love this country, but you can love it while acknowledging the pain caused by imperial Britain.”

‘I’ve learned to say what I think’

RAJ Chada was pretty much given an impossible job when he became leader of Camden Council late in 2005.

The walls were closing in on Labour and his predecessor, Dame Jane Roberts, gave him just six months to save the party from defeat in the following year’s council elections.

Against the fury of the Iraq War – which Mr Chada had opposed – Labour lost control of the council for four years to a Liberal Democrat and Conservative coalition. Camden never really got to know what things would have been like under his leadership.

His misfortune – he lost his Gospel Oak seat to a Tory councillor who went on to be an MP: Chris Philp – was good news for the Colston Four however.

Since leaving the council, his legal career has thrived – taking on challenging defence cases often with a radical or rebellious edge.

And his outlook on politics has changed.

“I don’t think I’d be invited to stand as an MP any time soon – even with the Colston case I have said some critical things about Labour’s response,” said Mr Chada, who lives in Kentish Town. “We’ve had Marvin [Rees, Labour’s elected mayor of Bristol] saying he understands the issues around Colston, but when it came to it these four young people were condemned and just thrown to the wolves.

“I’ve been disappointed by the reaction to the case by some figures in the Labour Party,” he said.

“It’s all so safe – and I don’t mean just Keir [Starmer, Labour Party leader]. It’s across the board, where people do not always say what they believe because they are worried about the reaction and it means we do not have considered debates on protests, Black Lives Matters, Palestine, a whole range of issues.

“I learned this too late. When I stood for selection after Frank [Dobson] stepped down, I knew I wasn’t going to win against Keir and I thought you’re nothing if you don’t say what you think.”