Activist campaigned for outsourced workers’ rights at his previous workplace 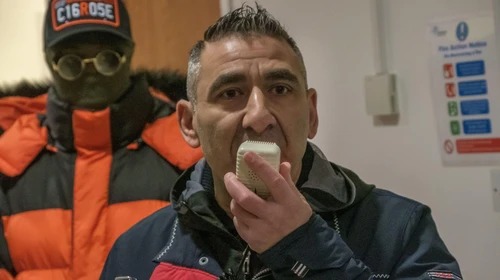 A SECURITY guard who was suspended from his job over trade union activity insists he has “done nothing wrong” and is taking legal action.

Cetin Avsar, who was employed by private contractor Wilson James, began working at the Sir Francis Crick Institute in Somers Town in October, but after three weeks was told he could lose his job.

He was suspended with immediate effect and invited to a probation hearing on the grounds that his “conduct has not reached the required standards”.

The invitation said the discussion would centre on his membership and work for the United Voices of the World (UVW) union.

Mr Cetin organised a strike at his previous workplace, St George’s Hospital, where he held a position under a different contractor.

He had campaigned for outsourced workers like himself to be given the same terms as in-house employees. Wilson James said this amounted to a “conflict of interest between [Mr Avsar’s] opinion and work with the union which led to your protesting, and [his] employment with Wilson James”.

As evidence the company attached links to a number of articles and tweets, including to the trade union’s website and Twitter page where Mr Avsar’s past trade union activity has been documented. UVW, which mainly supports low-paid, migrant and outsourced workers, and believes outsourcing is “antiquated and discriminatory”, sought an injunction against the company to have the suspension lifted, but this was not granted in court last month.

An appeal hearing is taking place today (Thursday) at High Court. The union has set up a crowdfunder to help pay for the legal fees involved.

Petros Elia, UVW co-founder and organiser, said: “In my eight years as a trade unionist I have never seen such a blatant and egregious violation of a worker’s human rights. This is far more than just a case of victimisation, Mr Avsar is also being punished for his beliefs that outsourcing – a practice which more often than not sees BAME [black, Asian and minority ethnic] and migrant workers in London receive inferior pay rates to their white in-house counterparts – is discriminatory and unjust.”

He added: “The hypocrisy of Wilson James is staggering. They have slapped a Black Lives Matter poster on the front of their website and waxed lyrical about how their industry ‘needs to do more for those from BAME backgrounds’, but in the same breath are unlawfully punishing a BAME key worker for having taken lawful industrial action at his former workplace.”

Mr Avsar said: “I am totally shocked by the way Wilson James are treating me. They are totally victimising me for being a member of UVW union. I have done nothing wrong. They are breaching my human rights and I will not stand for it.”

A statement from Wilson James said: “Wilson James is aware of the claims made by UVW, but as the situation concerning Mr Avsar remains under review it would not be appropriate to provide further comment at this time.”

A spokesman for the Sir Francis Crick Institute said: “Mr Avsar is not a Crick employee, and you should direct questions about him to Wilson James. Because legal procedures are underway in this case we are very limited in what we can say.”