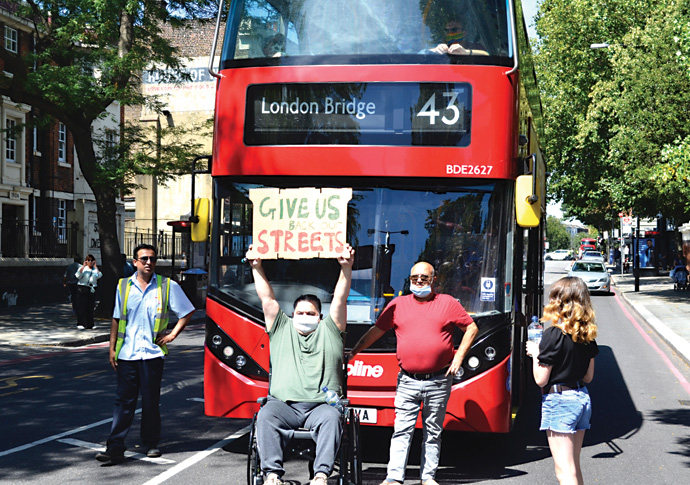 FOR the second Thursday in a row protesters blocked Upper Street outside the Town Hall yesterday, as they demonstrated against council plans to dramatically redraw the borough’s road map.

Islington’s “people-friendly streets” schemes are aimed at ending rat-running by drivers through residential streets and making traffic changes that will make walking and cycling safer.

Like Transport for London, which has been altering red routes, council chiefs want to discourage people from turning to cars as use of public transport falls amid the coronavirus health emergency.

But yesterday (Thursday) saw hundreds of protesters gather in Upper Street, where they themselves blocked the traffic and made speeches, before marching towards the Business Design Centre.

Traffic was held up for around half an hour, and congestion spread through bus routes across the borough. 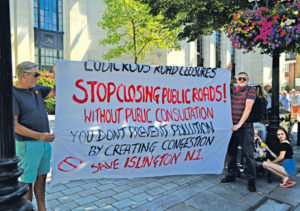 One concern raised by protesters is that the new road layouts will slow down emergency services vehicles, amid claims the council has ignored advice from the London Ambulance Service.

But the Town Hall insists it “has worked closely and continues to work closely” with emergency services on the issues of road safety. The London Ambulance Service declined to comment.

The council plans to cover at least a third of the borough in “people-friendly streets” by the end of the year, and has already installed the scheme in St Peter’s ward in Holloway.

Using special powers granted during the coronavirus crisis, the council pushed ahead with the roll out using experimental traffic orders (ETOs).

These orders allow the changes to be carried out without a formal consultation. Feedback is taken while the measures are in place, and the ETOs expire after 18 months. The council has committed to surveying opinion after 12 months to gauge whether people want the changes should be made permanent. 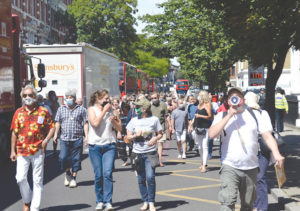 But opponents of the plans say they should have been consulted first and warned that changes will lead to longer traffic jams and journey times.

Urgent trips will be delayed and the disabled will find it harder to get around, they warn.

On Tuesday, the chairman of the council’s environment scrutiny committee, Labour councillor Dave Posyer, suggested the demonstrations were organised by “people outside the borough”.

But protesters refuted this yesterday, and also denied rumours that the protests were organised by taxi drivers worried about losing trade.

Organisers told the gathered crowds the council had “lied” to them, and laid out their demands for the council to meet, if it wanted to stop weekly protests.

One, who would identify himself only as “Gary”, said: “Last week the protests saw a number of council officials leave their ivory tower in the Town Hall and enter into dialogue with us. They said some cameras [used to enforce rules] would come down and dialogue would start. We were lied to.

“We are not afraid to continue these protests against road closures until our views are heard and taken seriously.

The protesters say they will not back down or meet with anyone from the council until their demands are met.

One flashpoint is whether physical barriers or numberplate recognition will be used to control the roads.

The Town Hall says it has listened to feedback from emergency services, and is “trying to strike a balance” between the benefits of physical closures and the need to minimise disruption to the emergency services.

It added the two zones so far have a 50/50 split of physical barriers and camera enforced restriction. Any width restrictions have also remained at the minimum needed for emergency services to pass.

Islington’s environment chief Councillor Rowena Champion said: “It is vital that we act now to create people-friendly streets, in order to make it easier and safer for people to walk, cycle, and use wheelchairs, buggies and scooters as alternatives to using public transport, for people to socially distance and to avoid a spike in motor vehicle use as we come out of lockdown.”

In full: What council says in response to demonstration 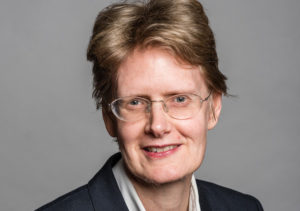 WITH protesters once again on the doorsteps of the Town Hall yesterday (Thursday) afternoon, Islington Council’s environment chief Labour councillor Rowena Champion issued a statement in response to the demonstration. We print it here in full:

“Islington’s people-friendly streets will help make it easier to walk, cycle, scoot and use buggies and wheelchairs, whilst making streets safer, more pleasant and better-suited for social distancing.

“Coronavirus has had a huge impact on us all, and life will not be the same once the crisis ends. The message from government has been clear – that local authorities must act now in order to avoid a dangerous rise in motor vehicle traffic as we come out of lockdown, and to make space for walking, cycling and social distancing.

“Transport for London modelling shows that, without action to improve streets, traffic volumes in the capital will become even worse than before the lockdown began, leading to more polluted, dangerous and noisy roads.

“As the government said earlier this week, this is a once in a lifetime opportunity to enable people to cycle or walk as part of their daily routine, in order to encourage healthy living, improve air quality, and boost safety.

“That is why we are acting now, urgently and effectively, to make streets more pleasant and enjoyable for our residents.

“As well as creating a greener transport environment, people-friendly streets also come with a vast range of health benefits – making streets safer for children to play in, better suited for exercise, and bringing cleaner air for those with breathing difficulties.

“The safety of our residents is an absolute priority, and that is why we have worked closely with emergency services before each people-friendly streets scheme is installed to make sure that they can continue to access every street.

“We continue to work with them to ensure that every crew is aware of the changes we are making.

“Local people know their streets better than anyone else, and we are listening closely to the views and suggestions they have given us via our Commonplace webpage. In addition, we will be consulting with local people 12 months into each people-friendly streets scheme to ask if they would like the measures to remain in place permanently.

“We are open to feedback, which is why we have invited the organisers of a planned protest outside Islington Town Hall today to have an open, constructive discussion with us regarding their concerns around people-friendly streets.

“We are disappointed they have not taken up this offer.

“The council remains open to feedback from local people, and we look forward to hearing our residents’ ideas on how we can continue to improve Islington’s transport network and create people-friendly streets for us all.”