The special farewell for Mary Rock and Katine Patros

TWO staff members at a Primrose Hill primary school with nearly 70 years’ service between them had their retirements marked with a horse-drawn carriage ride and afternoon tea at the Dorchester Hotel.

Mary Rock and Katina Patros were surprised with the celebration last Wednesday as they prepared to bow out from St Paul’s Church of England Primary in Elsworthy Road.

It was part of a handful of events and gifts for the much-loved staff members’ departure, after 31 and 34 years at the school respectively.

Ms Patros, a teaching assistant who lives a stone’s throw from the school, said: “It really doesn’t feel like I’ve been here this long. It has been a really lovely send-off.” 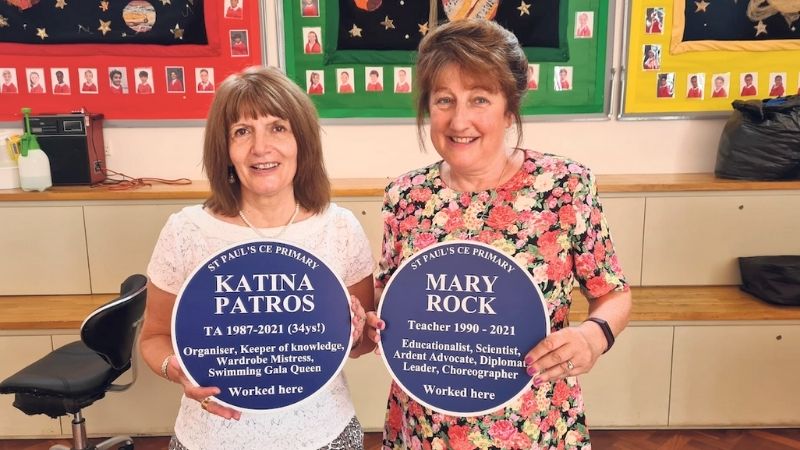 Katina Patros and Mary Rock with their plaques

Ms Rock, who was a class teacher for 26 years before becoming special educational needs (SEN) lead, said she had joined the school after meeting the headteacher at the time, John Wilkinson, at school sports events.

“He was extremely pushy at getting what he wanted,” she said. “He basically created a job for me – I really wasn’t going to stay very long. He let me do a lot of dance and music, as well as science, which has always been my passion.”

As well as two leavers’ assemblies at St Mary’s Church, opposite the school, they have been presented with caricatures by artist Jesse Brown, who is a parent, and two English Heritage-style blue plaques.

They said education had changed massively since joining the school around the turn of the 1990s.

Ms Patros said: “You’d be mixing paints and preparing displays but it’s now a lot more one-on-one work, There’s a lot more technology. I remember taking around the TV which was on this great big trolley.”

Ms Patros was also part of the school’s emphasis on swimming and sport. Both have been recognised for their contribution in the past few years – Ms Patros from Camden Council in 2013 for her work with the school’s sports teams, and Ms Rock from the Crick Institute ahead of her retirement for her science teaching.

They told the New Journal that it was the right time to step away after a disruptive two years due to Covid.

They are both hoping to travel more, but for Ms Patros a reminder of school won’t be far away.

“When I’m at home, if I’ve got the windows open, I’ll be able to hear the children in the playground, and that will be emotional,” she said.

Headteacher Clive Hale said: “In an ever-changing world, where families are often living away from their support networks, this kind of stability is a rare and special gift. There will be fewer and fewer people who will spend such an extended time in their workplaces.

“There is something in living and experiencing change in the community and knowledge of families over such a long time that makes this kind of service invaluable to communities everywhere.”