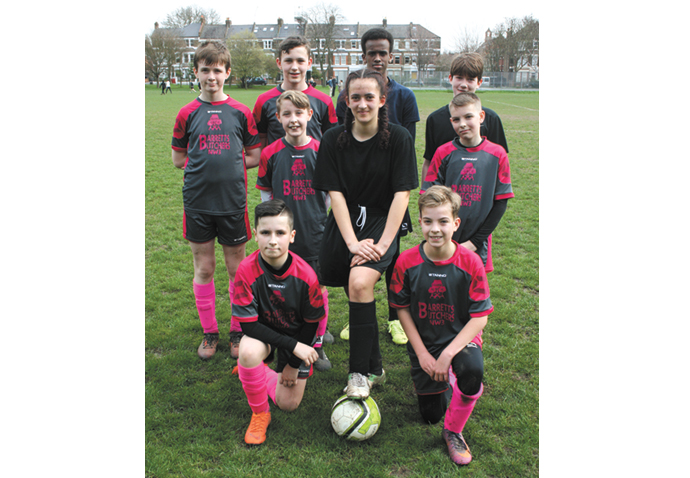 TOUGH-TACKLING defender Sasha Lewin is gearing up for a fresh challenge next season after signing up to play in an all-boys team.

The 13-year-old, who lives in Highgate, has agreed terms with Parliament Hill Youth FC. Her first task will be helping the mighty Parly Army defend their titles in the Camden and Regent’s Park Youth League and the Harrow Youth League.

“I’ve never played in an all-boys team before, I think there’s going to be more pressure but I’m really looking forward to it,” said Sasha, who goes to Acland Burghley School in Tufnell Park.

“So far I’ve really enjoyed training with my new team-mates, they’ve made me feel welcome. It’s been challenging but really good. So far, we’ve been working on our technique and fitness, it’s going really well.”

Sasha has starred in our sports pages before having been part of a successful girls’ team, Camden Youth FC. The centre-back, who also enjoys playing as a defensive midfielder, says that she’s going to have to up her game to continue that success with her new team.

She said: “I think some of the biggest differences that I will notice is that the boys’ game will be quicker, and I’ll have to be stronger and fitter.”

Sasha added that she hopes in the future other female footballers will follow in her footsteps and play in boys’ teams.

“I think when girls are looking for clubs they naturally look for girls’ teams, they think that boys’ teams are too tough,” she said.

“The idea of playing alongside the boys might be intimidating because sometimes they’re taller and quicker.

“But I think if any girls who want to play in a boys’ team train hard enough, once they get use to their new team-mates, it will give them more confidence knowing that they can compete with boys on the pitch.”