Arsenal forward, who missed crucial penalty for England in Euro 2020 final against Italy, thanks the fans for welcoming him back to the national stadium

Monday, 6th September 2021 — By By Paul Cowling at Wembley 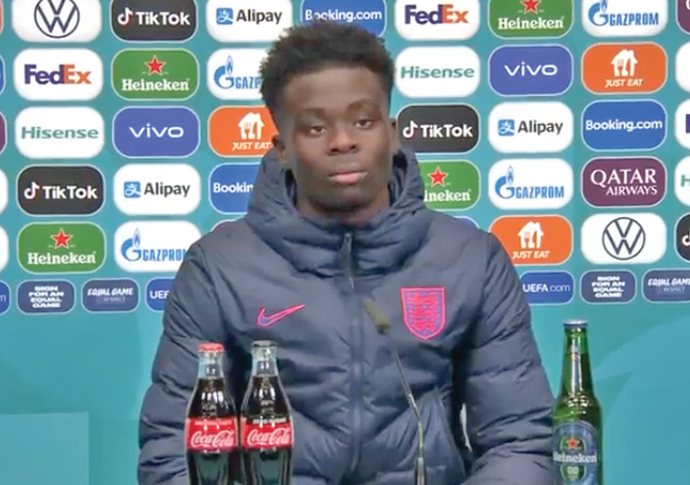 ENGLAND made very hard work of beating Andorra this evening (Sunday) with four goals and three more points towards qualification for the 2022 World Cup.

A brace from Jesse Lingard, and one each from Bukayo Saka and substitute Harry Kane put some gloss on what was a largely turgid display from what on paper was an England reserve side.

The highlight of the match was the late goal from Saka, who returned to Wembley for the first time since missing the penalty which succumbed England to Euro final failure against Italy in the summer.

Thousands of children had turned up, it seemed, to cheer on the Arsenal starlet, who was also celebrating his birthday. “This is what I dream about, playing at Wembley in front of my family and this crowd, and scoring on my 20th birthday,” said Saka after the game.

Referring to the racial abuse he received from across the globe after the Euro final, Saka added: “I am really happy with the reception everyone gave me, it shows how proud they are of me and that meant a lot.

“It means a lot, it really made a difference for me. Even now I can hear fans chanting my name. It means everything to me that I know they support me.”

Kieran Trippier was the only survivor from the starting line-up for that final defeat to the Italians. The left-back was one of 11 wholesale changes that Gareth Southgate made from the side which had dispatched Hungary 4-0 in midweek, with West Brom’s Sam Johnstone picked to play in goal, and Leeds striker Patrick Bamford making his senior debut in attack.

Bamford looked eager to please, but couldn’t get in the game in a poor first half, which England unsurprisingly dominated with 89 per cent early possession.

Led by stand-out performer, Jude Bellingham, England started patiently, pinning the Pyrenean-minnows back. And it was only a matter of time before the home side took the lead: Lingard scuffing a shot into the net on 18 minutes for his first England goal since November 2018.

The Manchester United midfielder almost had another a few moments later, but was adjudged offside.

Unfortunately with the game already won at 1-0, the crowd resorted to the dreaded Mexican wave for entertainment, and one or two paper planes.

Southgate had previously talked of how these paper planes had symbolised the tedium of watching England in times before they had thrilled the country with their Euro 2020 exploits.

But, nowadays more is expected of England – second string or not, especially when playing Andorra.

The Three Lions resumed their dominance in the second half. An early highlight was a dipping curler of a shot from Reece James that bounced off the crossbar.

Elsewhere, Bamford continued to have a debut to forget; he hopelessly mistimed an inviting cross when he looked certain to score, while England’s finishing started to look desperate and shabby.

Bamford was replaced by Kane on 61 minutes. The crowd were also treated to appearances by Mason Mount and Jack Grealish, as Southgate risked injury to three of his senior figures ahead of the slightly more taxing match on Wednesday away to Poland.

But even with the introduction of the magic trio, England still struggled to find a second goal, until Kane fired home a 72nd-minute penalty after Mount had been bundled over in the box. It was Kane’s 40th international goal in just 63 matches.

Going into the final 15 minutes, the England possession had inched up to 90 per cent but with only three shots on goal. Lingard made that four with his second goal of the game.

There was still time for the biggest cheer of the evening, celebrating Saka’s 85th minute header. Nobody seemed to mind that even at 4-0, England had not been good.