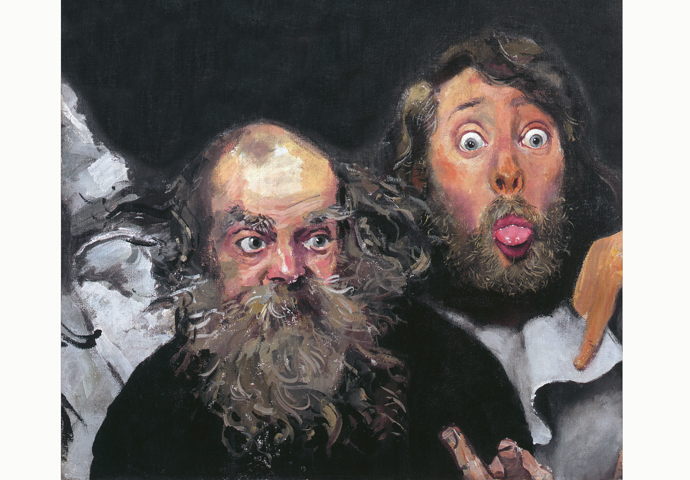 IT was not the sort of opening you’d find pinned on a Jobcentre noticeboard – but the task of standing over the embalmed body of Edwin “Diogenes” MacKenzie, a well-known vagrant who was lying in state in an artist’s studio, seemed a fairly everyday occurrence for Dr Mark Price.

It was one of many tasks he was charged with when working for radical artist, philosopher, aesthetic and social polymath Robert Lenkiewicz.

Now, 40 years on, Dr Price has written a biography that captures the aims, means, motivation and talent of one of the greatest – yet somehow unsung – artists of the late 20th century.

Lenkiewicz, born in 1941, grew up in a boarding house, the Shem Tov Hotel in Fordwych Road, Kilburn. Run by his mother, it provided an unconventional education in his formative years. Robert’s career saw him create a range of British realism that drew on everything from Old Masters to Augustus John and Walter Sickert, a body of work that married modernism and realism with political murals, a huge volume of “outsider” art with a long-term impact only beginning to be recognised.

Mark recalls the moment he discovered Lenkiewicz. “I was 20, working in Devonport dockyard,” he says. Heading to a waterfront pub, he came across Robert’s mural, The Elizabethans, for the first time.

“We turned a corner and I walked into an immense, dazzling mural, 3,000 sq ft, full of beautiful Elizabethan heroes and villains, arcane codes and alchemical symbols. It was a thing of awe and wonder. Not only gorgeous to the eye but thought provoking. Most people loved it, some religious people hated it, but it was impossible to ignore.” 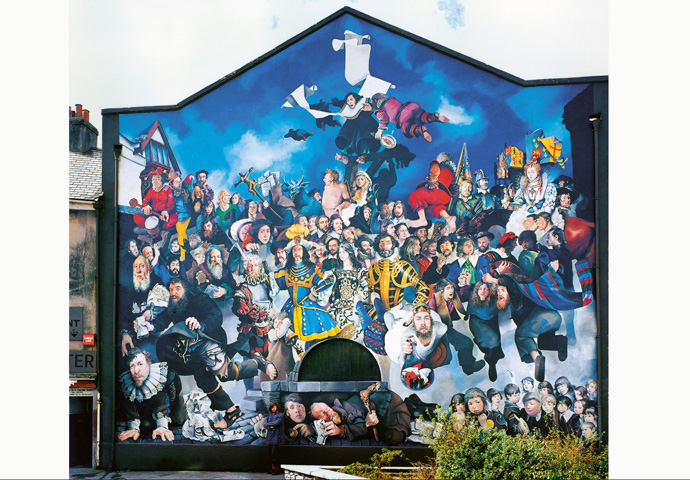 This comprehensive biography offers an understanding of a misunderstood artist, the background to an exceptional body of work and the polymathic alchemy that created it.

Mark met the artist while working in Plymouth’s ship yards, and joined his studio as an assistant. It was after taking up his role that Robert’s model and friend – the vagrant “Diogenes”, the subject of numerous pieces – had died. Robert embalmed his body and Mark was employed to look after the corpse.

“In some ways it was the easiest body guarding job ever, because Diogenes was dead. In other ways it was tricky because the authorities were keen to find and incinerate the body,” he recalls.

It was this type of behaviour that the public related to Robert – it garnered decent column inches – and this has been another motivation for Mark to tell Robert’s story. “There was a risk Robert might be mainly remembered for keeping the corpse of Diogenes. Sadly Robert’s art and philosophy never had similar exposure,” he adds.

We hear of his parents, Isaac and Alice, and how they escaped Nazi Germany. Isaac, originally a horse trader, managed to get to London via Paris and after time interned during the war, settled in London. Alice von Schlossberg, another German Jew, stowed aboard a boat as war clouds grew. Both parents would lose their families in the Holocaust.

Alice was obsessive. She pushed Robert constantly, often to the detriment of both him and his twin, Bernard, who was made to feel inferior. It was the perfect mix of talent married to hard work.

Due to constant practise, encouraged by Alice, Robert was technically skilled in most media such as watercolour, pencil, inks and oils, before e was 20 years old.
After leaving home, he lived around Belsize Park, Chalk Farm and Hampstead. He settled for a time in Eton Road, his home considered a counter culture scene in the 1960s – so much so that he and is wife Mouse, a fellow St Martin’s graduate, escaped by moving to Plymouth in 1969.

Robert’s early life explains his later subject matter, Mark says. “The big theme is exile. As a child of Holocaust survivors, Robert was exiled from his past. Imagine: everyone in your family except your parents murdered.

“The refugee experience is bad enough, but massive cross-generational trauma induced a kind of radical rootlessness.”

And this sense of being an exile, an outsider, was crucial.

The Shem Tov was home to a range of people at the ends of their lives, many processing the horror of the Holocaust.

“He abandoned it to become not just an artist but an unpaid social worker for alcoholics, drug addicts, lunatics. “He called them ‘the invisible people’. He didn’t fit in with them either because he was never a drinker, never took drugs. He was an outsider’s outsider.”

Before he could afford materials, he’d paint on scrap wood or the sails from fishing boats.

“His Devonport mural graced one of the most socially deprived areas of the whole UK. He was rightly proud of bringing images and ideas to people who would never normally set foot in a gallery.”

Drawing a credible narrative from these sources was a mammoth task.
“Whatever crimes or sins Robert was accused of, sloth was never on the list,” he says.

Thousands of words exploring and explaining his paintings had to be sifted through – and some parts were stronger sources than others.

“Robert’s diaries are detailed but not always reliable – but as Nietzsche and Freud said, the nature of a deception or a self-delusion is as revealing as what it tries to cover up.

“Fabulation and self-mythologising speak volumes. He loved to promote the idea that he was self-sufficient, a lone existential hero. But it became obvious that many of the women around him were crucial to what he was doing. Not just erotically and as muses – I mean the seven-day-a-week graft of feeding him and the legions of vagrants, keeping several studios running, organising meetings with sitters and patrons and fending off bailiffs.

“You won’t read that in Robert’s diaries, but after the first few interviews it was obvious.”

As important to Robert’s character as his art were his acts of generosity.

“In abject poverty, Robert would sell a painting and get good money in his hand. Then he’d gift it to the first person in need, knowing that the cash would pass to the nearest seller of booze or heroin. There is a complicity in that, not unlike handing razor blades to a self-harmer. Many people told him so. His response was always

‘They will spend it on whatever they need most.’”