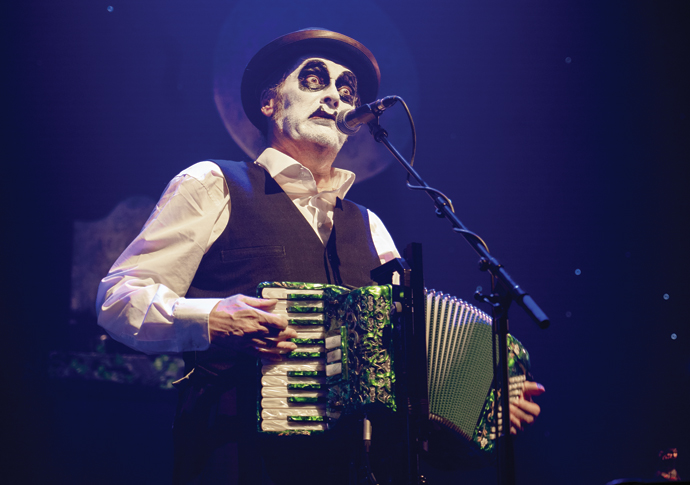 IT’S the season for ghost stories and adaptations of A Christmas Carol are proving particularly popular. The Tiger Lillies offer something a little different – a song cycle with a dark musical twist on Charles Dickens’ classic tale.

Given the success of their sensational, Olivier Award-winning Shockheaded Peter, their anarchic reimagining of Dickensian London promised to be something of a treat.

As ever, the trio’s music is sublime with Martyn Jacques on accordion, piano and ukulele and his distinctive falsetto voice in fine fettle. He is joined by Adrian Stout on double bass, musical saw, theremin and guitar and Budi Butenop provides the percussion.

However, A Christmas Carol is intensely visual, and much of that is lost in this pared back, 80-minute version.

We are given an evocative soundscape but at the expense of the story itself.

The staging is simple with a starlit background. The ghosts are represented as jokey ghouls on sticks and the storytelling is reduced to a brief narration between the songs.

Stout dons a night cap to become Scrooge, Ignorance and Want are represented by two dolls, while Butenop doubles up as Bob Cratchit and an oversized Tiny Tim.

This means we are denied the satisfaction of witnessing Scrooge’s dramatic epiphany. The songs effortlessly convey the underbelly of Victorian London, rather than Dickens’s redemptive tale.

Although we are swiftly immersed in the music, some of the lyrics felt a tad repetitive – “poverty” and “whores” cropped up rather too often.

There was less light and more shade, although Jo Palmer, Nao Nagai and Joel Stanners’ evocative lighting cast a warm glow over everything at the end.

In short, this show is more for fans of The Tiger Lillies than lovers of the Christmas tale.

Go with that in mind and you won’t be disappointed.