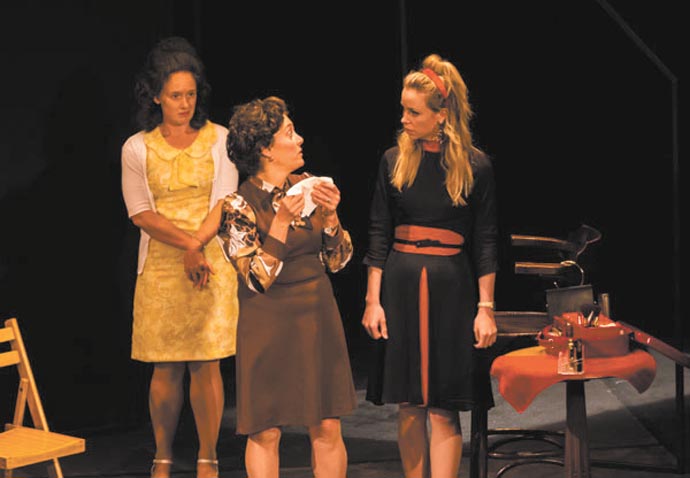 The Revlon Girl at Park Theatre 90

BASED on true events, following the tragic Aberfan disaster of 1966 in which 144 people died (116 of them children), this is an amazing play. It tells the story of a group of bereaved mothers, who met in its wake, as a way of supporting each other.

Secretly, so that they would not be judged as frivolous, they arrange for a representative from Revlon to come along and give them some beauty tips, in the hope it might help them feel better about themselves.

What follows is an exceptional 85-minute play that manages to be deeply moving, ferociously angry and very funny, without missing a theatrical heartbeat.

Neil Anthony Docking has given a voice to the forgotten, bereaved mothers of the Aberfan disaster. As each one comes to life on stage, in finely wrought dialogue and brilliant performances, the audience is made aware of the individual human tragedies behind the appalling headlines.

In its anger and pertinence it brought to mind the recent Grenfell Tower fire, and how perhaps that could also have been avoided, if only more money had been spent on ensuring public safety.

Unsurprisingly, the four mothers express a maelstrom of emotions. They are belligerent, stoical, resentful, guilty, flippant and also in denial. Charlotte Gray, Zoë Harrison, Michelle McTernan and Bethan Thomas bring them blazingly to life in unforgettable performances. Antonia Kinlay as “Revlon” is equally good as the “outsider”, who is at first resented and envied, but reveals an aspect of her life that changes the dimension of all their relationships.

Sensitively directed by Maxine Evans, with a clever set designed by Eleri Lloyd consisting of a few chairs, a make-up box and, most tellingly, a dripping roof, which contributes both humorous and poignant moments. If there is any theatrical justice, The Revlon Girl will become a classic of modern theatre. If only our decision-makers could be made to sit down and watch it.