Review: The Plague at Arcola Theatre 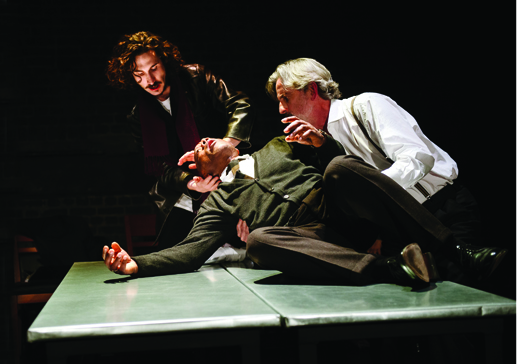 Albert Camus’ 1947 novel describes the effects of a plague in the French Algerian city of Oran.

Some claim La Peste was inspired by the cholera epidemic that ravaged Oran in 1849, others thought it was about the Nazi occupation during the Second World War. This ambivalence is part of the story’s power and one that Neil Bartlett fully recognises in his engaging, multi-layered production.

Played out on a largely bare stage, Bartlett’s adaptation opens with five characters sitting behind a table at some sort of official enquiry. They begin to share their experiences. The first sign of the impending catastrophe is the discovery of rats’ corpses. Then people start to die and the authorities fail to take decisive action.

Dr Rieux (Sara Powell) works tirelessly to save lives but there are other, less scrupulous characters.

Rambert (Billy Postlethwaite) is a journalist more interested in escaping the city’s lockdown to be reunited with his girlfriend than reporting the truth, while Mr Cottard (Joe Alessi), a petty criminal, tries to turn events to his advantage and make money smuggling desperate people out of the city.

I was reminded of the H1N1 pandemic, the Ebola outbreak and the current refugee crisis.

What Bartlett draws out are the human responses to tragedy – some kind, others cruel or self-serving. But, as Dr Rieux remarks, the most merciful act is “to speak up and bear witness; to make sure that there is at least some memory of the injustices and violences that are done to people…” It’s a poignant piece of theatre with particular relevance to our troubled times.