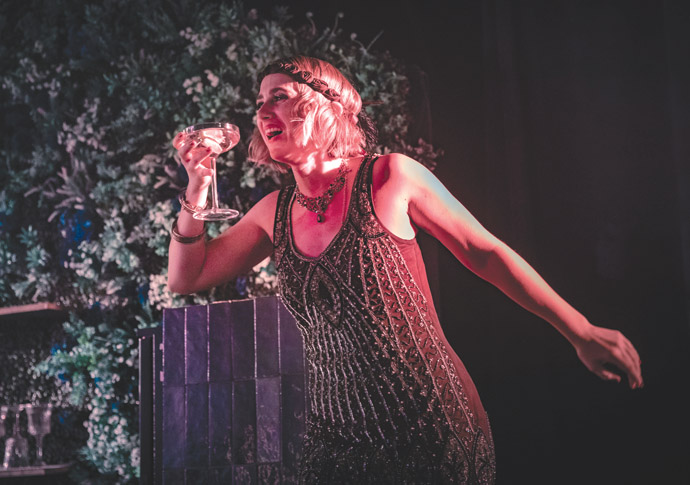 ALEXANDER Wright’s immersive adaptation of The Great Gatsby (which he also directs) is a lot of fun. Set in the decadent 1920s, we begin in a cavernous room in Mayfair, above The Lucky Club, with drinks aplenty, a long bar, piano and a welcoming dance floor.

The crowd grows and the babble rises until, finally, the show begins. We’re guests at an exclusive party hosted by the enigmatic Jay Gatsby (Oliver Towse). Dance, song and intrigue are guaranteed.

The jovial barman, George Wilson (Steve McCourt), introduces himself and ensures we’re happily settled. Nick Carraway (Hugh Stubbins) is our narrator for the evening. Like us, he wonders about the enigmatic Gatsby and when he’s going to make an appearance.

As the evening progresses, we learn that Gatsby made his money by dubious means. He moved to Long Island because he is still in love with Nick’s cousin, Daisy (Lucinda Turner) who lives across the bay.

Daisy and Gatsby met and fell in love before the war, but Daisy ended up marrying Tom Buchanan (Jermaine Dominique) a philan­derer who is having an affair with George’s wife Myrtle (Aminita Francis). Gatsby hopes to win her back and asks Nick to engineer a meeting. Their reunion over tea is one of the show’s highlights.

It’s a dream night for group parties and the bar-dance scenes are invigorating (we even get to learn the Charleston), but the audience’s chat is so loud we often cannot hear the actors.

The quieter scenes are the best, when we are led into various side rooms (Gatsby’s study and bedroom, Daisy’s dressing room, Myrtle and George’s living room) and spend time with the characters.