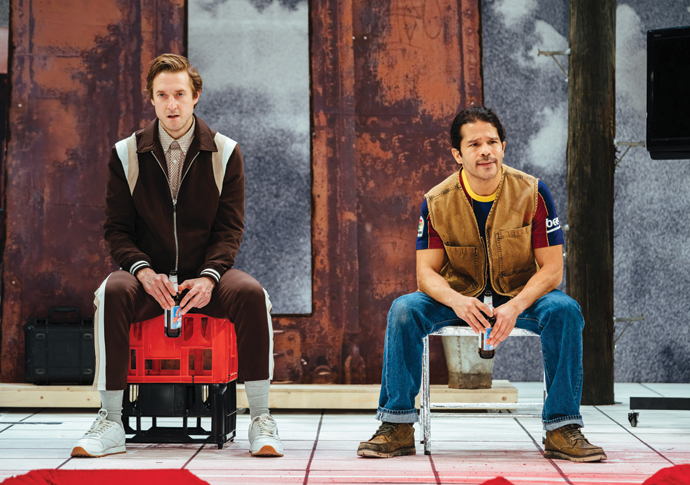 Inappropriately dressed in Bermuda shorts, Finn looks like a fish out of water. He is interested in buying Kimsa’s land because he needs cheap lithium for his electric car business. Anna (Genevieve O’Reilly), an English doctor and health researcher looking after Kimsa’s sick daughter, is also interested in the site. She claims the mineral could save the NHS. Used as a medicine, lithium alleviates depression and stabilises manic behaviour.

Then local politician, Nayra (Jaye Griffiths), enters the mix. She wants to make best use of the land for the community but also has political aspirations. She knows a populist stance will help win her votes.

Over the course of almost three hours, the characters strike deals and attempt to outwit each other. It’s entertaining, provocative and sometimes very funny, but would have benefited from being considerably shorter. That said, Hamish Pirie’s fast-paced production ensures we are never bored.

At the centre of everything is Kimsa’s ailing daughter who, we discover, has blood cancer due to heavy metal poisoning caused by centuries of silver mining; a legacy of colonialism.

It’s well acted – Darvill, in particular, playing a man with more money than sense. He conducts business in designer tracksuits and his naked ambition is both chilling and farcical. His brusqueness is a good counter­point to Albán’s modest and plain­ly spoken father who just wants what’s best for his daughter.

Equally ambitious is Smith’s play, which jumps between themes and sub-plots at a ferocious rate, piling intrigue upon intrigue. Despite its flaws, I liked the vigour of Rare Earth Mettle and Smith is clearly a talent to watch.

The road scheme here should be dubbed Amwell Soulless Streets!