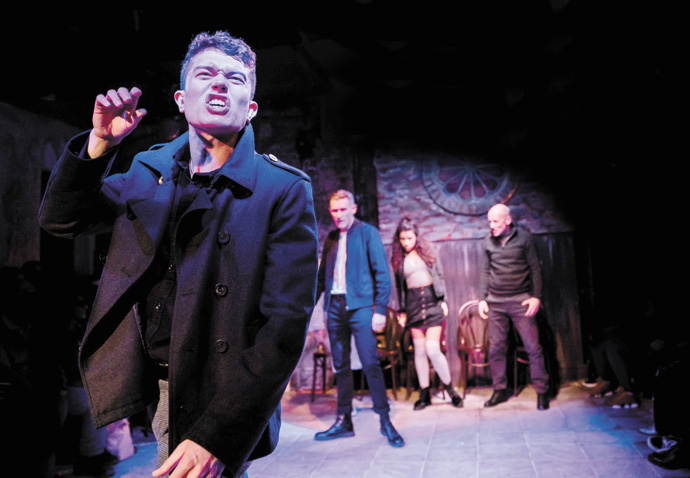 HISTORY repeats and comes full circle. Stepney-born Steven Berkoff’s East had its London debut at Islington’s King’s Head in 1975. It caused a sensation. Jessica Lazar’s production is likely to do the same. These grotesque Cockney characters don’t so much strut their stuff on stage but explode all over it, mugging the audience with their violent mongrel fusion of obscene language, Cockney rhyming slang and Shakespearean verse.

Best mates Les and Mike (Jack Condon and James Craze, dynamic), East End yobs you would run a mile from if you met them in the street, are fixating on sultry Sylv (Boadicea Ricketts, sensational). Mum (Debra Penny) is lost in dreams of artistic glory and flirting with high society. Sylv wants to be a man so she can gain some respect. Dad (Russell Barnett) is nostalgic for the good old days of vile punch-ups between Mosley’s fascists and Jews. His racist rants intensify into volcanic fury as he trashes the dinner table sending food, drink and family flying. 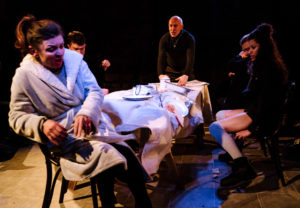 All the while a piano sweetly plays There’ll Always be an England as if dad were the epitome of a true-blue patriot. Tinkling the ivories is Carol Arnott whose piano, a sixth character, at times evokes Chaplinesque silent cinema especially when cast members lapse into comic mime.

Les and Mike are on an odyssey of sex and violence; Homeric as well as Shakespearean allusions pop up in the most unlikely places (Mike’s penis is likened to a Cyclops) much of it through the streets of Islington. Mount Pleasant, the Angel, Upper Street are all there. It is enlightening to know that Berkoff first studied acting at Camden’s City Lit in Drury Lane, so is something of a local lad. One of the most shocking scenes is Mike’s frenzied eulogy to the “c***” which gets repeatedly name checked. This elicited groans from some of the audience, reeling no doubt from the sexist misogyny that the Weinstein scandals unearthed.