Blood, sweat and love have gone into this intense production of the Bard’s tragedy – largely rehearsed on Zoom – to create what feels like an almost taboo evening of entertainment 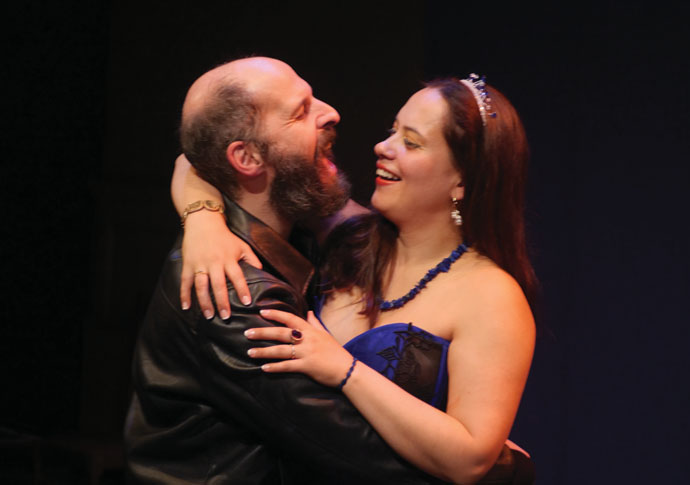 Michael Claff and Emma Wilkinson Wright in Antony and Cleopatra at Theatro Technis, until October 4

THE bubonic plague was wreaking havoc with the Jacobean theatre industry when Shakespeare wrote Antony and Cleopatra.

Playhouses were routinely shuttered to halt the spread of the virus forcing the bard into a very productive phase while working from home. He was in a lockdown of his own in 1606 when he bashed out this tragedy, along with Lear and Macbeth.

Swiss Cottage-based Acting Gymnasium troupe has seized the moment to put on what is a unique theatrical experience.

It felt safe enough with the temperature tests, masks and distanced seats. But there was too an unmistakable edge to the atmosphere in what was an almost taboo evening of entertainment. But shouldn’t all theatre be seen with some element of danger?

The circumstances made me appreciate the performance not only as a precious rarity but also the huge work that had been put in – 95 per cent of which was rehearsed by this sprawling cast of 20 actors on Zoom.

The action begins with the kind of “gaudy night” many have been dreaming of while cooped-up in our rooms with nowhere to go.

Cocaine-snorting socialites decadently dance the night away in Cleopatra’s Egypt palace. First impression: this must be the best-looking ensemble ever to have trod the boards at Theatro Technis.

The adjustment to the old English is always baffling. In many ways, the last six months of the pandemic have felt a lot like a perpetual first act of Shakespeare. No one has a clue what’s going on.

But soon enough the language penetrates and you forget about your smartphone and get on board.

Claff was the stand-out performer but Hanna Luna played Cleopatra – a tricky, unsubtle part – with fire and intensity. The scenes with her faithful servant Charmian (Emma Wilkinson Wright) were among the night’s best.

Enobarbus (Gabriel Puscas) got a big cheer at the end. As did the lighting man, and rightly so.

The production felt like a real team effort, under Gavin McAlinden’s direction. A lot of blood, sweat and love had gone into it.

This must be supported. As must the Theatro Technis, for so many decades a pillar of Camden’s theatre scene. Lockdown or no lockdown, the hottest ticket in town.