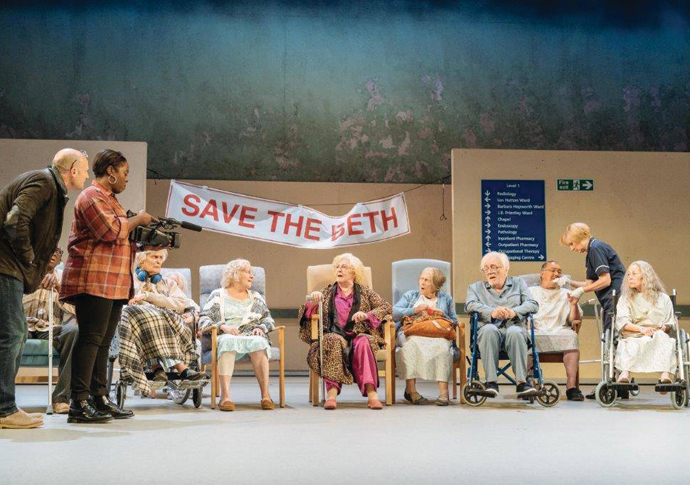 ALAN Bennett’s first new play for five years is set in the Bethlehem, a small Yorkshire hospital that cares for patients from birth to death. It is successfully meeting its targets, but Whitehall wants to close it and centralise services.

Former local lad, Lycra-clad Colin (Samuel Barnett), now a management consultant at the Ministry, is here, not officially, but to see his ex-miner father in the geriatric ward. He may be gay and ride a bicycle, but he’s no socialist and puts the situation succinctly: hospitals in the red should be closed, successful ones privatised.

Meanwhile Chair of the Trust (Peter Forbes) has organised a protest campaign and invited a TV crew in to cover it. They are shooting in the geriatric ward where nurses have organised a choir among the patients. 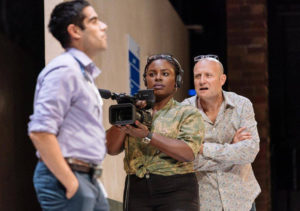 They not only sing, but cast away Zimmer frames and walking sticks and dance: a fantasy that metaphorically celebrates the NHS and the post-war idealism and egalitarianism of the generation they represent.

They are played by a dozen senior actors wonderfully back on stage including Jacqueline Chan, Julia Foster, Cleo Sylvestre, Jeff Rawle and Simon Williams. 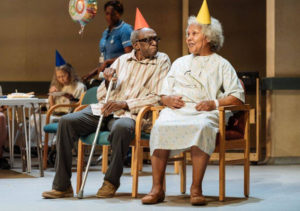 They are all delightful character creations and fill the first half along with Sacha Dhawan, as everyone’s favourite Dr Valentine, and Deborah Findlay as award-nominated Sister Gilchrist who runs the ward.

At first it is all gently enjoyable Bennett but behind the warmth is a sharp reminder of the threats facing the NHS at 70. In the second half, the picture and the plot darken as Valentine finds his future threatened by his immigrant status and efficient Gilchrist finds her own way of avoiding a bed crisis when patients are ready for discharge but have nowhere to go to.

This isn’t Bennett’s best play but his affectionate tribute to the NHS and its original ethos is still a treat.

For all its inherent warnings of the need to protect them, Nicholas Hytner’s celebratory production sends you out in high spirits.