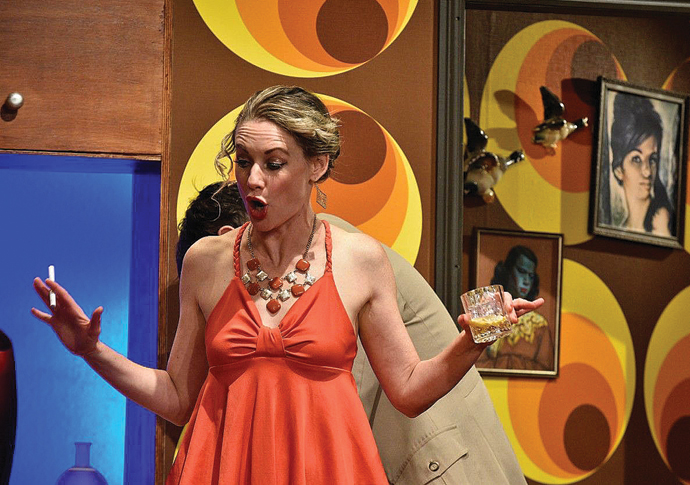 THE characters in Mike Leigh’s 1977 drama, Abigail’s Party, were created through lengthy improvisation. It made the small talk believable and the comedy ring true. The play ran at Hampstead Theatre for 104 performances before being adapted for TV and the rest, as they say, is history.

Alison Steadman memorably created Beverly, a smug, complacent woman, preoccupied with appearances and hiding her insecurities behind a thin veil of passive aggression. Steadman’s performance was delightfully theatrical and her energy drove the play. She’s a hard act to follow and I’m not sure Kellie Shirley entirely succeeds in Vivienne Garnett’s sparkly new production.

Beverly (Shirley) and her estate agent husband Laurence (Ryan Early) are holding a drinks soiree for the neighbours. Over the course of an evening – which descends into farce and ends in tragedy – we learn about the characters’ foibles, their pretensions and social aspirations.

Tony (Matt Di Angelo) and Angela (Emma Noakes) are the first to arrive. Angela is gauche, her husband taciturn. She’s a nurse, he’s a former footballer who works in computers. His sullen treatment of Angela verges on abuse. Susan (Barbara D’Alterio) is the last to arrive. Her teenage daughter Abigail is holding a party over the road.

For Beverly, a well-stocked bar and cheese and pineapple on cocktail sticks are the height of sophistication. She is determined to get everyone drunk, bullies them into accepting cigarettes, flirts shamelessly with Tony, and makes them listen to her favourite records, including Demis Roussos’ cheesy hit, Forever and Ever.