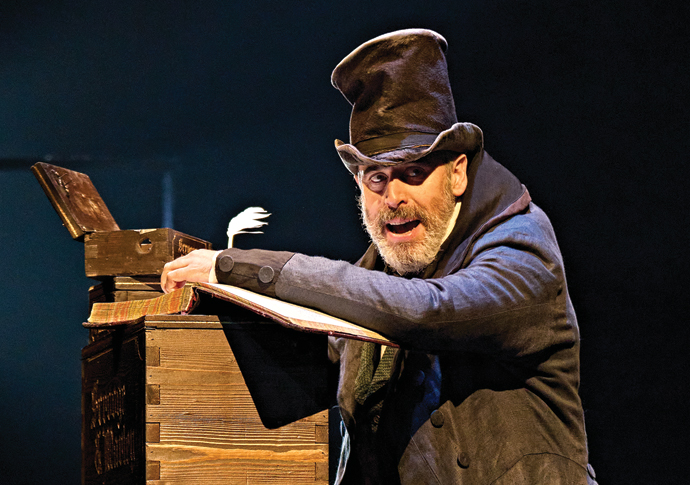 It’s Christmas Eve. After Scrooge (Stephen Mangan) has turned away those seeking alms for the poor and sent his long-suffering assistant Cratchit (Jack Shalloo) on an unnecessarily long trek to Richmond, he is visited by the ghost of his former business partner Jacob Marley (Andrew Langtree).

Weighed down by chains and money boxes, as punishment for his greed, the apparition tells Scrooge it isn’t too late for him to avoid a similar fate, but he’ll have to confront more ghostly encounters.

Played by women (Amanda Hadingue, Rachel John and Rose Shalloo), three ghosts take Scrooge on a journey into his past, present and future and attempt to show him the error of his miserly ways. 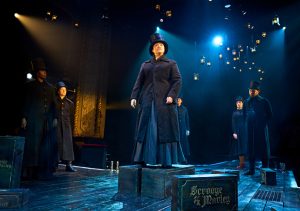 We learn of a cruel father and Scrooge’s love for his sister Fan (Shalloo) as well as his neglected fiancée Belle (Karen Fishwick) who finds happiness elsewhere. Meanwhile, Cratchit’s young son Tiny Tim faces certain death unless Scrooge make a conscious decision to save him.

In Matthew Warchus’s evocative production, the Old Vic is transformed and we are effortlessly conveyed to Victorian England. The audience is seated around a traverse stage, lit by lanterns suspended from the ceiling, the musicians inhabit a balcony while the auditorium is also imaginatively used.

A grizzled Mangan proves an engaging Scrooge. A younger actor reminds us of the life Scrooge has left in which to make amends. We all love to watch a character’s emotional journey and the moment Scrooge is transformed never fails to move. The tale’s central message of kindness, goodwill and community spirit feels more pertinent than ever.

Uplifting festive fare. Do not miss.

Other noteworthy productions of Dickens’ classic include:

• The Tiger Lillies’ Christmas Carol. Giving it a dark musical twist, the band dissect the tale and shine a light on the poverty and depravity of the cold London streets. Combining Grand Guignol with a mixture of pre-war Berlin cabaret, anarchic opera and gypsy music, The Tiger Lillies never cease to shock, surprise and entertain. Dec 14-30, Southbank Centre’s Purcell Room, age 14 + southbankcentre.co.uk
• Mark Gatiss’s spooky adaptation of A Christmas Carol, starring Nicholas Farrell as Scrooge and Gatiss as Marley, is at the newly restored Alexander Palace until January 9. christmascarolonstage.co.uk
• In Cratchit at Park90, Alexander Knott reimagines Scrooge’s tale from the perspective of Bob Cratchit, who is taken on a time-bending journey through Christmas future. Until January 8. parktheatre.co.uk