Rescue group hopes for a spike in hedgehog numbers 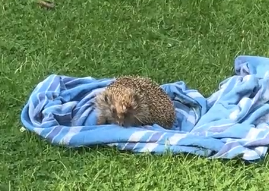 VOLUNTEERS say they are helping hedgehogs return to West Hampstead by feeding them and providing medical help.

The NW London Hedgehogs group said more of the spiky animals are being seen in gardens but they need support.

Founder David Scott said: “We had hedgehogs in our neighbourhood 20 years ago, but we hadn’t seen them recently, so it was a quest of mine to bring them back.”

He set up the initiative with his friend, vet Stephen Barabas.

Mr Scott said: “We’ve been creating habitats for them, holes in fences, supplementing water and food. On top of that, providing hedgehog houses for them to nest in.”

When the gardens were ready, Mr Scott said they had worked with charities to adopt rescued hedgehogs and release them into the neighbourhood.

In some gardens, hedgehogs have begun mating, according to the group.

“They started breeding last year, we saw on our cameras, which we leave out,” said Mr Scott. “I was lucky to see two hedgehogs courting in my garden a few weeks ago.”

Occasionally hedgehogs are found injured and NW London Hedgehogs say it is then called into action.

Mr Scott said: “Sometimes predators nip their back legs or they might just have a wound, they could be starved or dehydrated.”

Last week a hedgehog was found in a garden in Fordwych Road, with maggots in its eye.

The hedgehog was whisked to Mill Lane Vets, where the eye was removed. After a few days of rehabilitation the hedgehog was ready to be safely released back into the garden.

NW London Hedgehogs was set up to combat the nationwide decline in the hedgehog population.

Mr Scott said: “We are the first urban hedgehog rehabilitation project in the UK. It’s a different ballgame trying to rehabilitate them in London.”

He added that making small changes to gardens can create great habitats for hedgehogs and other wildlife too.

“Woodpeckers, bees and even slow worms are important,” he said, but added: “If you see a hedgehog out in the day it’s probably dehydrated, so give it water and a bit of wet dog food.”

The future for hedgehogs was discussed in parliamentary debates in 2017 when it was feared that a colony that had set up home in the London Zoo car park in Regent’s Park would be put at risk by an increase in lorry traffic due to nearby work on the HS2 rail line.

But it was later discovered that the animals had successfully bred, with 17 baby hedgehogs recorded in a nocturnal survey. It was not known why the hedgehogs had chosen a car park but the zoo said they had been there for decades.

Hampstead Heath was the only other location with signs of a colony amid declining numbers.