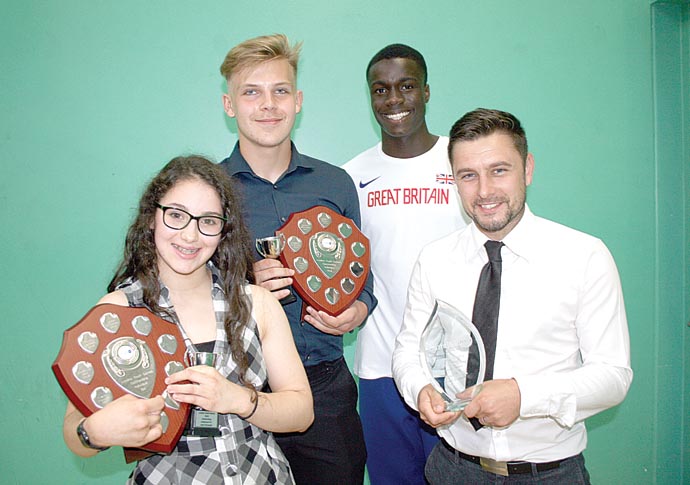 A RECORD-BREAKING high jumper who has his sights firmly set on the Olympics has shared his golden rule of competing with young athletes from across Camden and Islington: whatever sporting challenge you’re tackling, “make sure that you’re having fun”.

Highgate Harrier Dominic Ogbechie, who lives in Hampstead, has lit up the athletics world this year, striking gold and breaking records along the way.

In February he became the youngest Briton to clear seven feet when, at the age of just 15, he leaped a massive 2.22 metres to set a new Under-17s world record in the high jump at the English Indoor Championships.

Having since turned 16, he was at it again two weeks ago when he won gold for Team GB at the European Under-18s Championships, which were held in the Hungarian city of Győr. This time Dominic cleared 2.16m to beat Oleh Doroshchuk of Ukraine to the number one position on the winners’ podium. It’s the best track and field result set by a member of Highgate Harriers at European level since Simeon Williamson won the Under-23s title for the 100m in 10.10 seconds back in 2007.

On Tuesday, Dominic was among the special guests at the Camden Active Sports Awards, which were held at the Talacre Community Sports Centre in Kentish Town.

He presented awards to Edwin Zaimovic and Leah O’Connell, who won the Camden Outstanding Boy and Girl Awards respectively following their medal successes during the London Youth Games. Edwin scooped silver for the second year in succession in the indoor rowing, while in the Para Games athletics Leah took gold in both her 100m and 200m races.

Dominic also presented an accolade to Regent High School’s head of P.E. Grant Osborn, who was named Outstanding Team Manager of the Year.

Speaking at the event, Dominic said: “I first joined Highgate Harriers when I was seven or eight years old. I used to do other sports as well. I’ve won European and world titles in karate, but I stopped that so I could take athletics a bit more seriously.”

Asked about his advice for all the young athletes in the audience, Dominic added: “The first thing to do is to have fun, make sure you’re having fun in anything you do. Once you start having fun, training becomes easier, and all the hard work becomes easier.

“Also, try as much stuff as you can. I started originally with sprints, and I still sprint, I still do high jump, I do the long jump, I run 200m. Try as many events as you can, which will help you gage which one you want to take more seriously in the future. Explore your options.

“Obviously put in the hard work, as without hard work you’re not going to get the rewards that you need to get. And don’t be demotivated by the disappointing performances or competitions that you have, because at the end of the day, even though you might not get all that you want now, it’s is a long-term thing, so just take that time, and think ‘this is not the end, I’ve still got further to go’, then you’ll realise that it will all be worth it once you get to where you want to be.”

“More short term, next year I’ve got the European Under-20s Championships, and my main aim now is to go there and win a medal. Other than that it’s to keep on progressing.”