Queen’s Crescent set to be blocked off to cars

Experimental traffic order could be introduced next month 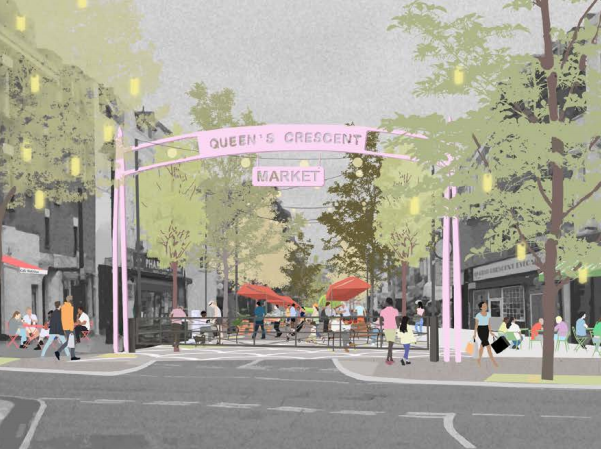 THE closure of Queen’s Crescent to traffic under new plans by Camden Council could see emergency services delayed in responding to incidents, creating a “criminal paradise”, opponents have warned.

The stretch of the road between Weedington Road and Bassett Street will see planters installed to block off traffic. The designs involve creating “parklets” and seating.

But it’s feared the changes could restrict access to a GP practice and pharmacy in the crescent, and make it harder for emergency services to respond to 999 calls.

Exemptions would be in place at times through­out the week to allow loading for market traders.

The Queen’s Crescent Community Association, which runs services including a nursery and a foodbank, will still be accessible by car from Malden Road and Gilden Crescent.

But Councillor Oliver Cooper, the leader of the Conservatives, said: “This proposal would sabotage policing in the area. Pedestrianising the only through road between Prince of Wales Road and Mansfield Road would stop police cars getting through and cost several minutes in an emergency or pursuit.”

The consultation time has doubled from a fortnight to four weeks– both longer periods than the amount of consultation time offered on the controversial Haverstock Hill cycle lane plans, which divided opinion before being paused.

The New Journal understands that this follows pressure from Labour councillors for the ward. The proposals are part of the Queen’s Crescent Public Realm project, which has already seen £1.1m of Greater London Authority (GLA) cash used to pay for changes.

If approved, changes will come into place from March under an experi­mental traffic order.

A Camden Council spokesman said the London Ambulance Service, Metropolitan Police and London Fire Brigade had been consulted as part of the plan.

He added: “We are proposing changes in these areas that will provide more space for people to walk and cycle, help children get to and from school safely and support local businesses to flourish. Consultation for these proposals is currently open and we would encourage residents and businesses to take part and have their say.”

The consultation closes on February 24.