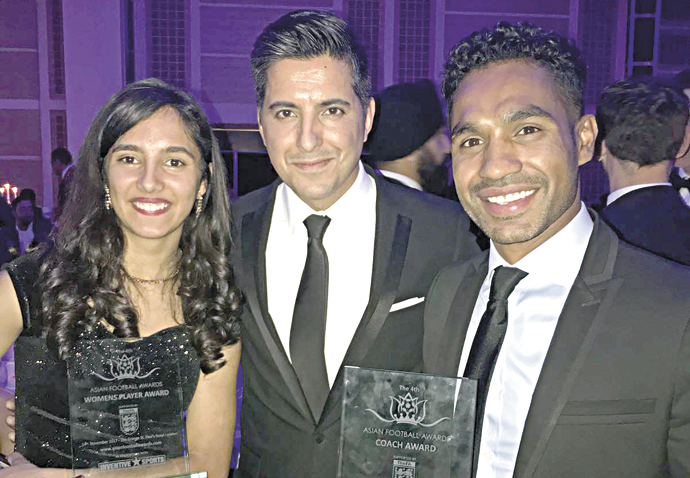 Taff Rahman (right) celebrates his success with Tottenham Ladies midfielder Maya Vio, who won the Women’s Player of the Year Award, and BBC football presenter Manish Bhasin, who was one of the judges

HAVING enjoyed their day out at Wembley there was further reason for the team from Just Play FC to cheer on Tuesday when club founder Taff Rahman was named as Coach of the Year at the Asian Football Awards.

The 33-year-old, who was born in Bangladesh, saw off competition from Leicestershire FA coach Nimesh Patel and Riteesh Mishra, the head coach at Charlton Ladies, to win the gong at a glitzy ceremony held at Grange St Paul’s Hotel in central London.

Taff boasts a CV that any Premier League manager would be proud of. He is one of the few coaches in the country to earn his Uefa “A” licence, has a diploma in football management from the League Managers Association, and has even gained an “On Board” merit after completing a corporate governance course funded by the Professional Footballers’ Association aimed at making boardrooms more diverse.

But, despite all the awards and accolades, the former Arsenal youth player insists that the best thing about being recognised for his work is that it presents him with the perfect platform to inspire and encourage other young coaches.

“The best piece of advice that I could give anyone is to always follow your passion,” said former Tottenham coach Taff, who is now a coach educator for the FA.

“No matter what happens, what highs and lows you face, keep believing, and stay in the game.

“I feel really proud to have won this Coach of the Year Award, but, as I’ve said previously, for me it’s not really about winning awards.

“What’s great is that someone might see or hear about my success and it might motivate them to keep working hard and pushing for their goals.”