Point out the flaws in the HS2 designs for Euston station 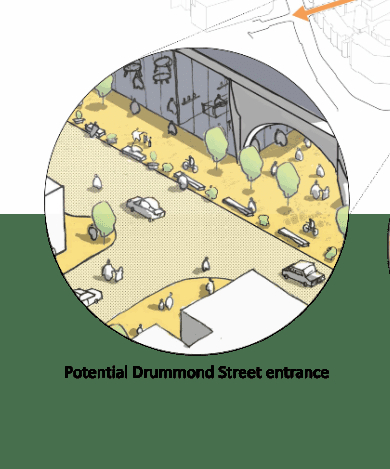 • HS2’s final public consultation about their design of Euston station is currently running until 6pm on November 28. They have invited the public to send comments on their design to Hs2incamden@hs2.org.uk prior to their planning application to Camden next spring.

Strangely they only provide one tiny external view of their proposed station… apart from the stylistically questionable golden main station entrance (which is also bogus because it is actually now embedded in an office block plot).

The tiny view is a cameo of the proposed tunnel entrance at Drummond Street on Cobourg Street the east side of which HS2 have previously said has been demolished to create grand boulevard… “like Exhibition Road”.

And the cameo view shows this boulevard with trees and planting set in a very wide pedestrian area with many benches… in front of (what HS2 call) “active frontages”. This active frontage is shown as the reception of an office block and a shop front.

But this cameo view is merely an aspiration… because the consultation about the station design ignores the 20-storey high office city that the Australian company Lendlease will build above it as a completely separate design… (explaining why the cameo view is cut off at station roof level).

These new office towers lack the underground servicing of the existing much smaller existing tower blocks at Euston which will be demolished shortly.

Camden, TfL and the GLA have dissociated themselves from this masterplan report partly because of this lack of off-street servicing.

If you feel strongly about this you may wish to send an email to HS2’s consultation email address above (under the heading Station Design Consultation). More details of this can be found at: hs2ineuston.commonplace.is/schemes/proposals/hs-2-euston-station-design-development-update/details.

You will see that one of the key aspects for which HS2 request feedback is re open spaces. And clearly your feedback will be on their unrealistic depiction of the open space in Cobourg Street which ignores the likely impact of vehicle servicing for the office blocks above.