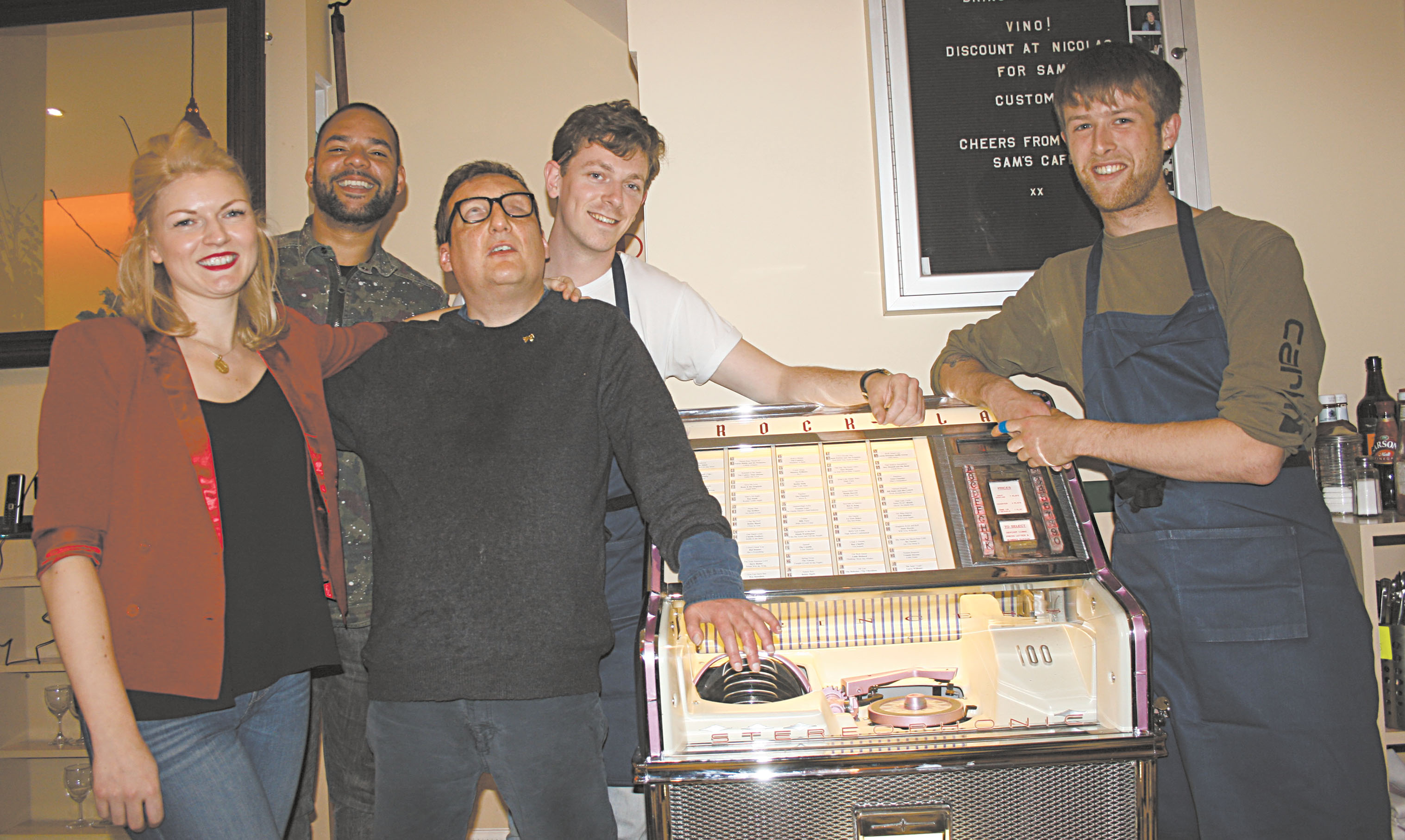 I SQUEEZED into the shiny leather alcove of Sam’s Cafe in celebrity-strewn Primrose Hill on Friday afternoon – and talked to Sam about the “glory days” of the old style English-type shop that has disappeared.

I recalled the fish-and-chip shop run by a gregarious Cypriot family and the old hardware shop, all closed, it seemed, to make way for coffee bars and boutiques.

Everything about Sam’s Cafe reminds me of an American diner, though my experience of them in the US is disheartening – poor menus, poor food, and too many obese customers. But Sam’s Cafe is different, and Sam was on a roll. In one sense, he didn’t mean “glory” days. But I guessed what he meant.

Now, Sam Frears suffers from a rare medical condition. When he was born it was thought he might not live beyond five years of age. It affects the nervous system, creates unsteady walking, and Sam has to take fluids through a tube in his stomach.

We got talking about his condition and, as he bends forward a bit, he suddenly says it only affects Ashkenazi Jews, and that is from his mother’s side, a New Yorker originally.

I got carried away a bit here and explained that Ashkenazi Jews came from eastern Europe as distinct from Sephardic Jews who originated from north Africa and Spain.
Sam took it all in. 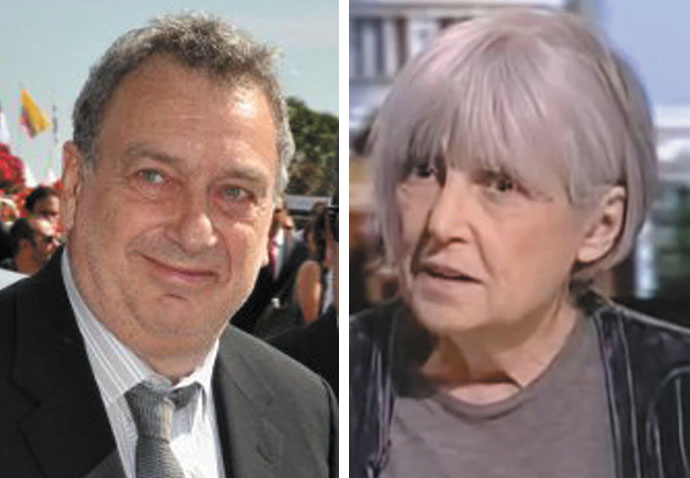 It was then that the word “disabled” came up, and I made the point – I hope I didn’t sound pompous – that I don’t use the word “disabled” nowadays, having talked a lot recently to “people with disabilities. I don’t like using state-licensed language, being politically correct, that is, but “people with disabilities” sounds right. After all, a disability is only part of a person. And then aren’t we all disabled in some way, if you come to think of it? Sam nodded in agreement.

Then he pulled up his cardigan to show me his stomach. “I can’t take liquid except through this,” he said, pointing to a box-like device with a little tube sticking out at the top. “Oh, you mean it’s like a catheter,” I said. I thought back to the time, a few years ago, when I had to wear a catheter for a few months, and what a nightmare that was! “Yes,” and he gave a big laugh.

Sam, who gets quite a bit of work as an actor, and has had a TV documentary made about him, is part of a big literati set in Camden. I used to see him at the Russian Tea Rooms in Primrose Hill, and we discussed the vanished Cossack-style menus of the past – and especially my liking for black bread, or unadulterated rye bread to most readers.

And the family has piled in to help him. Part of the family network is the rock star Robert Plant who chose the first 100 discs for the cafe’s pièce-de-résistance – a smart, sizzling jukebox.

The discs cover 1958-62, and Robert Plant, I gather, is putting together the next set of discs for the jukebox. 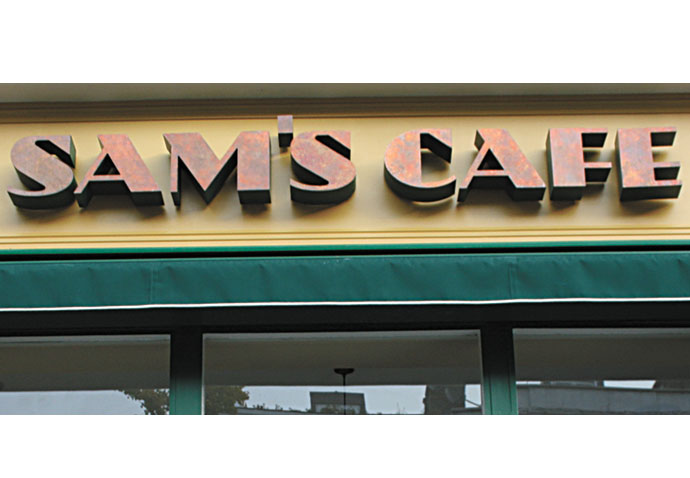 Some of the favourites I recognise – Lonnie Donnegan’s John Henry and Big Bad John by Jimmy Dean which, Sam told me, is the big hit in his new cafe.

The novelist Andrew O’Hagan, a close friend of the family, also threw in ideas about how to make Sam’s Cafe stand out as a kind of throwback to the past.

Sam, who beat the deadline given on his life expectancy, has reached 45 and has lived most of his life in Primrose Hill –he attended Primrose Hill Primary School. The family used to live in Gloucester Crescent ending up close friends with Jonathan Miller and Alan Bennett.

I have never met Sam’s mother, Mary-Kay Wilmers, but she and Sam’s father, the big time film director Stephen Frears who emerged with that gorgeous film My Beautiful Launderette, and then The Queen, with Helen Mirren. But this week I saw one of his best films for the US cable channel, HBO, called Muhammad Ali’s Greatest Fight, about the champion’s refusal to fight in the Vietnam war. Mary-Kay Wilmers, by the way, is editor and co-founder of my favourite publication, the London Review of Books.

Sam surprised me when he told me he was filmmaker Karel Reisz’s godson. Karel directed that classic of the 1960s, Saturday Night and Sunday Morning, his wife was Betsy Blair, another of my Hollywood fav­ourites, who came to the fore with the indie move­ment. She’d once been married to Gene Kelly.

Sam, as you’d expect, makes his way as an actor – he’s busy, done a few shows for the Chickenshed theatre company, and we discuss the anvil of many actors – learning your lines.

I had been chatting to him for about a couple of hours, while his carer Wayne Coley, who sat opposite him, would join in from time to time. I like the relationship between them, friendly and caring as you’d expect.

Then come the photographs, and the posing, and Sam joins in, and there’s laughter – and I leave feeling refreshed somehow.