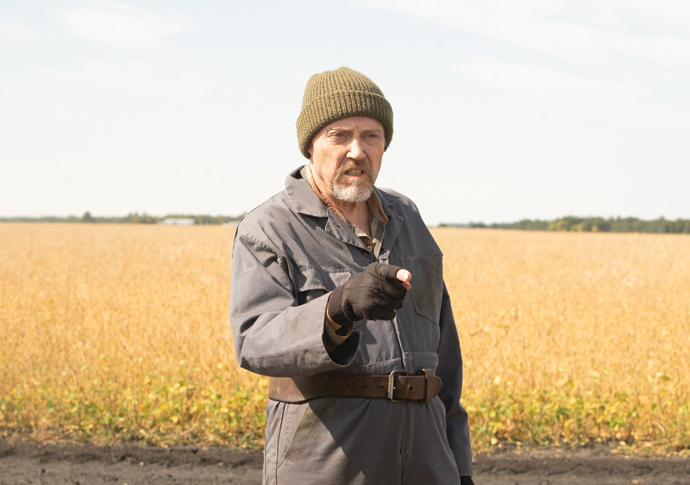 Percy Vs Goliath
Directed by Clark Johnson
Certificate 12a
☆☆☆☆

THE words of Woody Guthrie’s unofficial American national anthem This Land Is My Land contains in a few short verses the message this true life drama conveys.

Guthrie’s song of emancipation through a shared common wealth rings out as a shortcut to what is at the heart of this true story.

Percy (Christopher Walken) is a Canadian farmer who has a deep sense of guardianship over his land: not just over the clods of earth he knows well, but the seeds he plants each year.

His whimsical, grubby blue collar and slightly hippie attitude is made apparent when he tells the stories of how, generations ago, his forefathers went out from Poland with seeds sewn into their jackets, as they knew this was their best collateral and if they had their seeds, they could settle on a patch of American land and start over.

He has saved samples of his seeds every year, and can read the crops, read the weather, read the earth – he knows farming.

One day, technicians from Monsanto, the GM crop-raising agri-giants, take samples from his fields and then accuse him of stealing a grain they have modified that means farmers can use their pesticide Round Up and not affect crops they grow.

Not so, argues Percy – I’ve never bought your seeds, and if somehow they have been blown on to my land and grown naturally, that’s not really your business.

Determined not to settle what he believed was a morally unjust stance, we follow Percy and his wife Louise (Roberta Maxwell), backed by small-town lawyer Weaver (Zach Braff) and clichéd environmental do-gooding city-type Rebecca (Christina Ricci) as they battle the giant corporation all the way to the US Supreme Court.

Walken wears his farmer’s overalls with a natural ease, does a good line in farmer-like homilies, and the anger of the issue burns through his eyes.

And the outcome of this tale has had knock-on effects across the world. Whether you subscribe to the view that says GM crops are a vital, safe tool to help feed the world, or are a dangerous experiment and look at food production and poverty issues from the wrong direction, how Percy took on corporate bullies is an important and inspirational story. It gets to the heart of what Woody Guthrie was saying when he penned the lyrics “this land was made for you and me”.