Opposition to new blocks at the locks 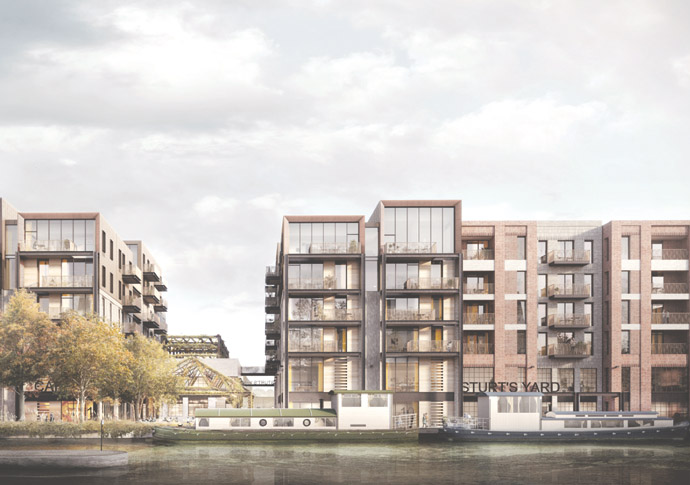 How the new development could look

PLANS to redevelop a block of warehouses on the banks of Regent’s Canal has alarmed conservationists who say it will “tower over” the surrounding area.

Residents in homes around Arlington Square and Waterfront Mews could be overshadowed, it was claimed, as developers submitted an application to build seven-storey blocks by Sturt’s Lock on the other side of the water.

The scheme, put forward by Access Self Storage Ltd, would see the two-storey warehouse buildings in Eagle Wharf demolished and replaced by blocks with 139 flats in them.

It is not clear how much affordable housing will be included, but space for storage, offices and a cafe has been allocated.

Ian Shacklock, chairman of the Friends of Regent’s Canal group, said: “Homes in Arlington Square and along the canal will suddenly have seven-storey blocks towering over them before they know it.”

Sturt’s Lock allows boats to move along the canal and transition from one stretch of the waterway to another.

The Regent’s Canal was dug in the early 1800s when it was used as a major commercial highway. At one point 700,000 tonnes of goods were transported along it every year. But the rise of rail and road freight brought about a severe decline in use of the canals in the 20th century.

The Friends of Regent’s Canal are campaigning to bring back commercial use of the waterways as a way of funding repairs and maintenance.

They also claim it is a more environmentally friendly mode of transport. There used to be two locks operating at Sturt’s Lock but one was mothballed years ago.

The Eagle Wharf development could now see the second lock permanently put out of use as the developers plan to use the bank of the canal for public seating.

Mr Shacklock said: “We are objecting on the grounds that the landscaping is creeping onto the second lock and it could put it permanently out of use. We need all locks available to make it sustainable for the future.”

Transport consultant Dave Holladay added: “One canal boat could ­carry about 80 tonnes, the equivalent of taking four trucks off the roads. There is no friction on the water so it takes a fraction of the energy needed to transport anything.”

The Eagle Wharf scheme was submitted to Hackney Council earlier this year.

A spokesman for Access Self Storage said: “The proposals for the regeneration of this site are for a high quality mixed use development designed by award-winning architects which will provide attractive new workspace and new homes. One of the key features is to facilitate public access to the canalside by a new route from Eagle Wharf Road and a café will allow the public to enjoy and appreciate the canal. The proposals have evolved over time and the existing landscaping and trees around the lock will be retained. There is also nothing contained in the plans that would prevent any future opening up of the lock. The amount of affordable homes to be provided are currently under discussion with Hackney Council.”