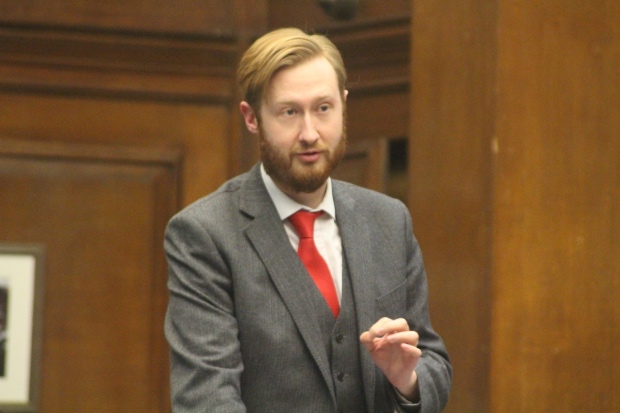 A LABOUR councillor will resist calls to stand down after he was referenced by an investigation into how complaints of antisemitism were dealt with by the Labour Party, insisting: The report found I’ve done nothing wrong.

Both the Conservative and Liberal Democrat groups at the Town Hall have questioned whether Thomas Gardiner, who worked as director of governance and legal for the party, should continue at the Town Hall in the wake of the Equality and Human Rights Commission’s findings that the party, nationally, had broken equality laws.

Cllr Gardiner, in response, said he had actually been responsible for introducing a more robust complaints process which saw more people expelled from the party.

The row in Camden comes after the publication of the Commission’s final report on Friday, which saw leader Sir Keir Starmer apologise to the Jewish community and his predecessor, Jeremy Corbyn, suspended by party for his reaction to it.

The Commission said the party had breached the Equality Act due to political interference and failing to provide adequate training to staff handling antisemitic complaints. It also found there had been harassment.

It said there was a “culture within the party which, at best, did not do enough to prevent antisemitism and, at worst, could be seen to accept it.”

In relation to Mr Gardiner’s role, the Commission said former staff at the Governance and Legal Unit (GLU) “gave evidence that the leadership of the Labour Party had sought to gain political control of antisemitism complaints by ‘installing’ Thomas Gardiner”.

It added: “One former GLU staff member described Thomas Gardiner as LOTO [Leader of the Opposition, Mr Corbyn}’s ‘trusted person’ in the GLU. Witnesses suggested that he acted as the ‘gatekeeper’ on antisemitism complaints. They said he would liaise with LOTO staff to make decisions on complaints, which rendered GLU staff ‘powerless’ in their jobs.”

The report also said that this evidence was disputed, adding: “This account of Thomas Gardiner’s role was challenged by the Labour Party and Thomas Gardiner. Karie Murphy (then LOTO’s Chief of Staff) told us that Thomas Gardiner was seconded to this role ‘after concerns were raised regarding the function of GLU by the Leader and Chair of the Party’ and that ‘LOTO needed to be provided with regular updates and as previously requested, a comprehensive explanation on the processes’.”

READ FOR YOURSELF: MAIN SECTION OF EHRC’S REPORT RELATING TO THOMAS GARDINER

Speaking for the first time on the report’s publication, Cllr Gardiner said: “The EHRC did not find any wrongdoing on my part, and the report in fact identifies significant improvements which came about through my work for the Labour Party, including for example large increases in the number of cases which resulted in expulsion for antisemitic conduct and the speed at which those expulsions took place.”

He added: “It is therefore disappointing that the Conservatives and Liberal Democrats have chosen to seek political advantage, rather than focus on healing the deep pain which so many in the Jewish community have felt. I worked flat out over the last few years to combat antisemitism among Labour Party members. I deeply regret that the work which I and other Party staff did was not enough to ease the fears that so many Jews experienced.”

Georgia Gould, the leader of the Labour group and Camden Council, has been contacted for comment, but has yet to respond. No other member of the Labour council group has commented specifically on Cllr Gardiner’s role, although several have said the overall publication of the report was a “day of shame” for the party.

Cllr Gardiner said: “I remain committed to the fight against antisemitism. If it would help the process of healing between the Jewish community and the Labour Party, then I would welcome direct conversations with the representatives of any local Jewish community groups who wish to speak.”

But Conservative group leader Councillor Oliver Cooper said: “I’m proud that one of the largest Jewish communities in London calls Camden home. We have all been shocked and sickened by the level of hate and anti-Jewish discrimination revealed by the publication of the EHRC Report.”

He added: “Whatever his motivations, Cllr Gardiner was a key lieutenant of Mr Corbyn over the past few years with an insider view of this discrimination. Despite his power to stop the torrent of abuse, he stayed silent – showing no regret or remorse. We have received too many complaints about him just to turn a blind eye. Jewish residents have asked me how he can remain as a councillor, and I can’t justify it. We must retain all residents’ trust with swift action through the council’s formal processes and, failing that, by withdrawing the Labour whip.”

Cllr Gardiner’s supporters say he could not comment publicly while employed in the unit under the Labour Party’s own staff and confidentiality rules.

The Liberal Democrats in Camden had reacted immediately to the report’s publication by calling for Cllr Gardiner to consider his position on the council, and added in a statement: “It is incumbent upon the Camden Labour Group and wider Labour Party also to suspend and remove the party whip from Cllr Gardiner.”

The party’s statement added: “Cllr Gardiner’s role in the Labour Party’s handling of antisemitism is described in detail in the Equality and Human Rights Commission report. Pages 51 and 52 specifically denote his decision-making capacity and how his role undermined the independence of – and confidence in – the complaints process.”

“With no statement of apology or contrition for his role in this crisis, we do not believe Cllr Gardiner is fit to represent our diverse community.”

The Lib Dems had already questioned whether Cllr Gardiner should serve as a consort to Camden Mayor Maryam Eslamdoust, his wife, in her first year as the borough’s first citizen as Labour’s antisemitism crisis saw protests outside parliament.

Beyond the debate over Cllr Gardiner’s role, Labour members are set to clash over Mr Corbyn’s suspension at the next constituency meetings in Hampstead and Kilburn, and Holborn and St Pancras.

The former leader had said in his first response to the publication of the report that the number of cases had been “overstated”.

Mr Starmer said in an interview with the BBC’s Andrew Marr yesterday (Sunday): “I think the vast majority of people in the Labour party and the wider movement think that that was the wrong response and the right response was to honestly accept the findings, apologise, move forward.”

The exact rule that Mr Corbyn allegedly broke in his statement has not been referenced, however, and the Islington North MP has announced he will fight to be reinstated by the party.

He asked his supporters not to desert Labour over his suspension, adding: “To members of the Labour Party, I say: please don’t leave, stay, and argue the case for the radical policies we need to eliminate poverty and in­justice within our society.”

The CNJ has published online pages 48-52 of the EHRC report so readers can see the main section relating to Cllr Gardiner’s role.