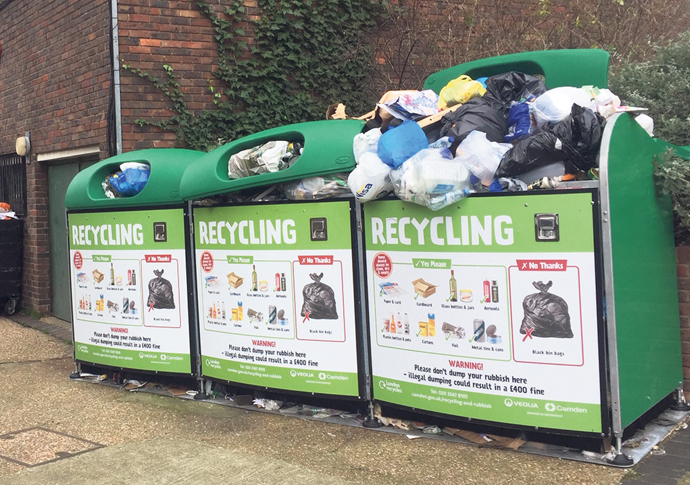 RECYCLING has fallen to among its lowest ­levels in Camden in the past decade, according to new figures.

Councillors were told in a private briefing with contractors that just over a quarter of rubbish is now being recycled.

The recorded amount had fallen from 29 per cent to 26 per cent from the previous year’s tally. The final amount of rubbish being recycled will be even lower because around a fifth that is picked up is rejected because it is contaminated with refuse.

It is argued by the opposition Tory group that this ­problem has worsened after weekly household bin collections were removed in 2017.

The statistics relate to the end of March 2020 so do not include the impact of the coronavirus lockdown. Camden and refuse collectors Veolia had aimed to have 38 per cent recycled this year.

The borough is now also the worst in England for fly-tipping, with 34,465 incidents reported compared to 26,004 the year before, an increase of a third. Complaints have mounted about piles of rubbish bags waiting to be collected on street corners, occasionally being blown down the road or split open.

Conservative leader Cllr Oliver Cooper said: “Camden need to use every tool at their ­dispo­sal, any break clause or mechanism. They need to pull out every single stop, but first they need to admit they have a problem. These statistics all stand alone and speak for themselves, but for everything to be going in the wrong direction shows that Camden needs to use them.”

The council refused calls to review the contract at the end of last year.

A spokeswoman said: “Camden has been advised that waste from places like schools and places of worship are to be categorised as ‘household waste’. This has contributed to a recorded drop in the recycling rate. While this is disappointing, the council has addressed this and other factors and expects to see an increase in the recycling rate for 2020/21.”

A spokeswoman for Veolia said it was working with Camden and residents to improve recycling rates.