One Festival brings work by homeless artists in from the cold 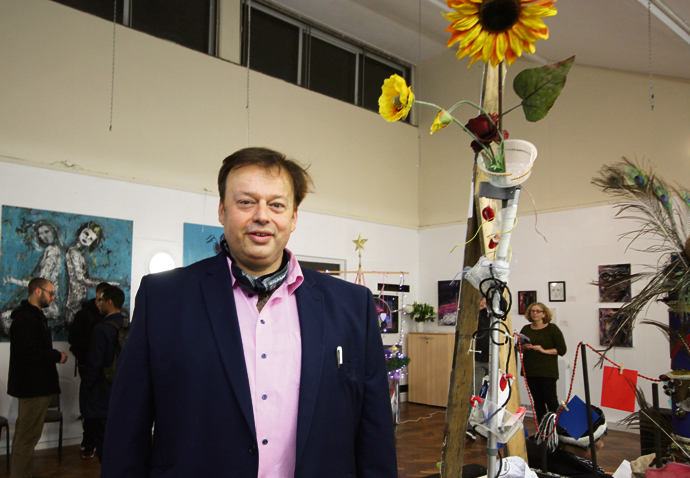 A HOMELESSNESS charity which usually only opens its doors to the borough’s most vulnerable has launched an art exhibition made up of work created by its former service users.

Now in its second year but coming to Islington for the first time, The One Festival of Homeless Arts was founded by artist David Tovey, who once relied on the ­services at the Pilion Trust to get him out of homelessness and crystal meth addiction.

Mr Tovey now leads art therapy sessions at the charity’s winter shelters for at-risk youths. This month, the charity’s new offices in Lough Road, Holloway, alongside the Diorama Arts Centre in King’s Cross, have been transformed into galleries showcasing work, some for sale, ­created by service users alongside those by noted homeless artists from as far away as Japan.

Each winter, dozens of vulnerable young people are referred to the Pilion Trust’s crash-pad scheme where they will spend Christmas in a safe space with a roof over their heads.

Visitors can view the artworks at 60 Lough Road, Monday to Friday, between 11am and 5pm until the end of the month.

More information about the exhibition and the other venue at: https://www.facebook.com/OneFestivalNW1

Land, sea, air… how Brandon’s career is taking off 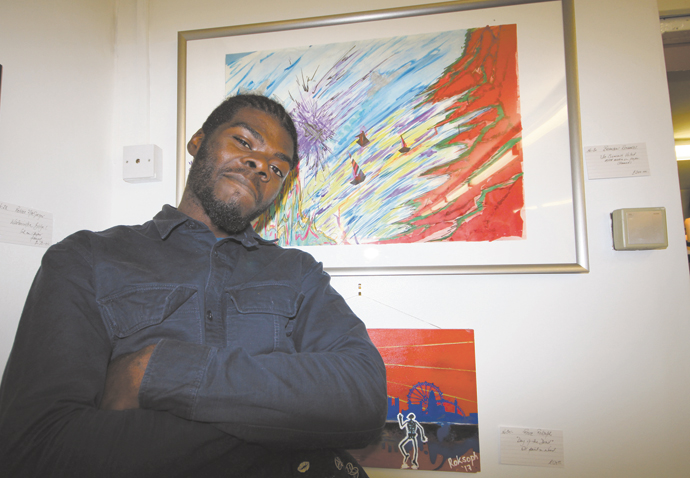 FASHION designer Brandon (above), 23, created The Elements United when he moved into his first stable home. The piece depicts the meeting of land, sky and sea and symbolises how he faced his issues for the first time.

“I wanted to leave land and go via air but you’d find trouble in the air and you’d try the sea, but as you know, you can get trouble everywhere you go,” said the Cally Road resident.

Brandon was asked to leave his childhood home at 18 and he stayed in homeless shelters for four years, but the instability left him with poor mental health.

“Savvas [founder of the Pilion Trust] realised that my ways, my brick wall and everything, were not a bluff,” said Brandon who stayed at the Trust’s winter shelter last year.

“I don’t feel I’m suffering inside, it feels like someone’s recognised my troubles and assured me that there’s nothing wrong with it and there’s help out there.”

Brandon was referred to the Peter Bedford housing association which has housed him for the past three months. He is currently launching a new streetwear fashion label, Phantom Phenomenon, where he plans to channel his creativity. He also helped set up the gallery earlier this week.

Melvin vows to fill his ‘cup of hope’ 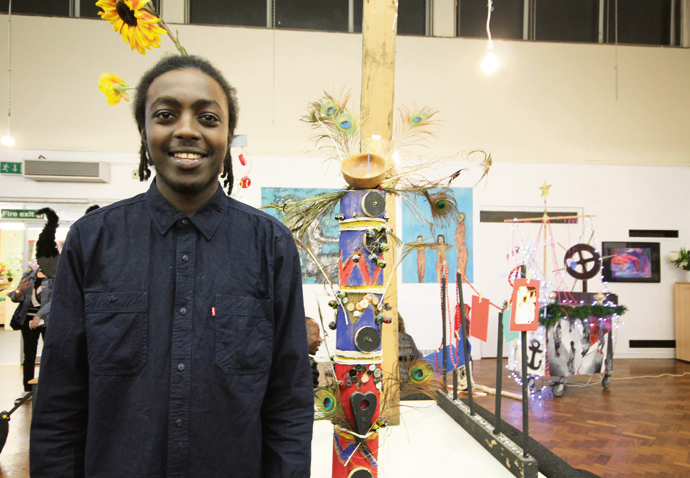 WHILE sectioned at Highgate Mental Health Centre for four months, Melvin (above) had just 15 minutes a day to enjoy the outside world and create art. His red and blue totem pole, made during this period, sits proudly in the middle of the gallery. Made from wood, buttons and beads, it has distinctive peacock feathers flowing out from the top.

“It has four discs around it and basically the four discs represent the four losses in my life – my mother, my uncle, my grandad and my sister. The little wonky cup at the top is the my cup of hope – it represents the up and downs in life,” said the 22-year-old.

“At the end of it all, the cup will be full,” he added with a smile.

Prior to being sectioned just a few months ago, the former Cally Road resident was homeless but the Pilion Trust took him in last winter. While in their shelter he was taught by Mr Tovey the importance of art as a form of therapy.

Melvin said: “He told us, ‘whenever you feel down or lonely, art is a form of expressing yourself. All of the stuff going through your head can be put down in a piece of paper or any form of art and you will eventually be able to make something out of it’.”

Since being discharged from the health centre two months ago Melvin has branched out into painting birds and cityscapes. But his main love is computers and he is pursuing a degree in software engineering at a London university.

He added: “I can’t even imagine life without the Pilion Trust, I would be homeless with nowhere to go.”

Going behind the mask: Pandora’s clowns 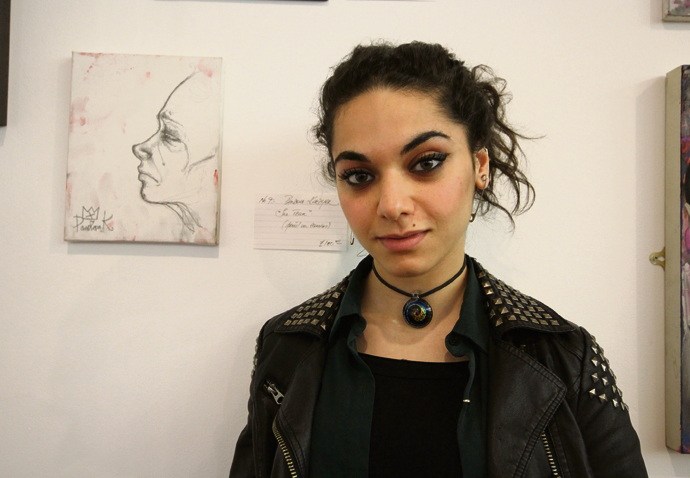 PANDORA(above) had just been accepted to study fashion at Central Saint Martins when she became homeless. She had no stable home for two years.

“I was really not in the right place, I was unstable, I was depressed and hated myself, the only thing I was holding on to was a little string,” said the 20-year-old.

She stayed at the Pilion Trust’s winter shelter last year which provided some stability.

Pandora describes her work as “psychology art”, a reflection of what goes on in her head.

One of her favourite pieces depicts a crying pierrot, and the clown features prominently in her works.

“I always pretended to be happy, I put a mask on but I was never happy – I expressed my feelings through drawings,” she said.

Pandora has just finished a stint interning at fashion label Versace and hopes to one day take up her place at Central Saint Martins. 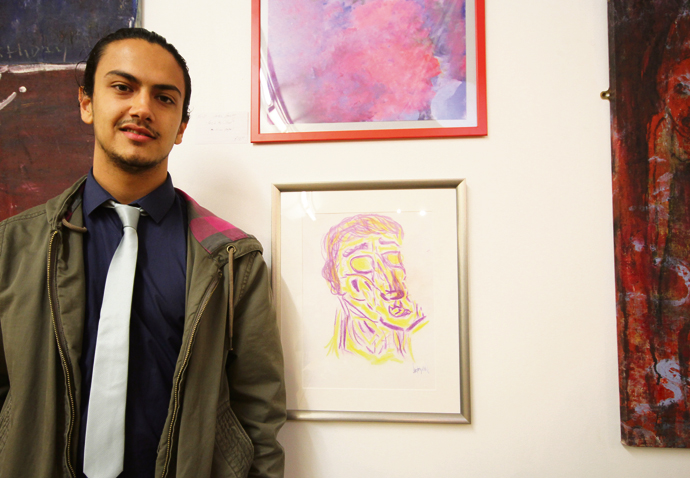 DEMPSEY(above) would be bounced from one family member’s house to another while growing up in Kent.

“It finally got to the point where I couldn’t be on someone’s sofa and I needed to find somewhere to stay,” said the 19-year-old who now lives in Hackney Wick.

He eventually found his way to the winter shelter at the Pilion Trust last year where he struck up a close bond with its founder, Savvas Panas.

Dempsey not only draws but takes photographs and three of his black and white prints which feature religious iconography are in the exhibition. He says his favourite piece is an abstract drawing of a head made with yellow and purple pastels.

“It signified confusion. I can’t draw people how they really look, it looks like a sculpture – like a Greek sculpture. It’s drawn from imagination,” he said.

Dempsey is now working as an extra on a BBC drama called Informers which has given him the acting bug. “It made me want to pursue acting. I’m about to get some local theatre stuff and get any acting experience I can,” he said.