Part of Queen's Crescent made car-free and junctions gated off 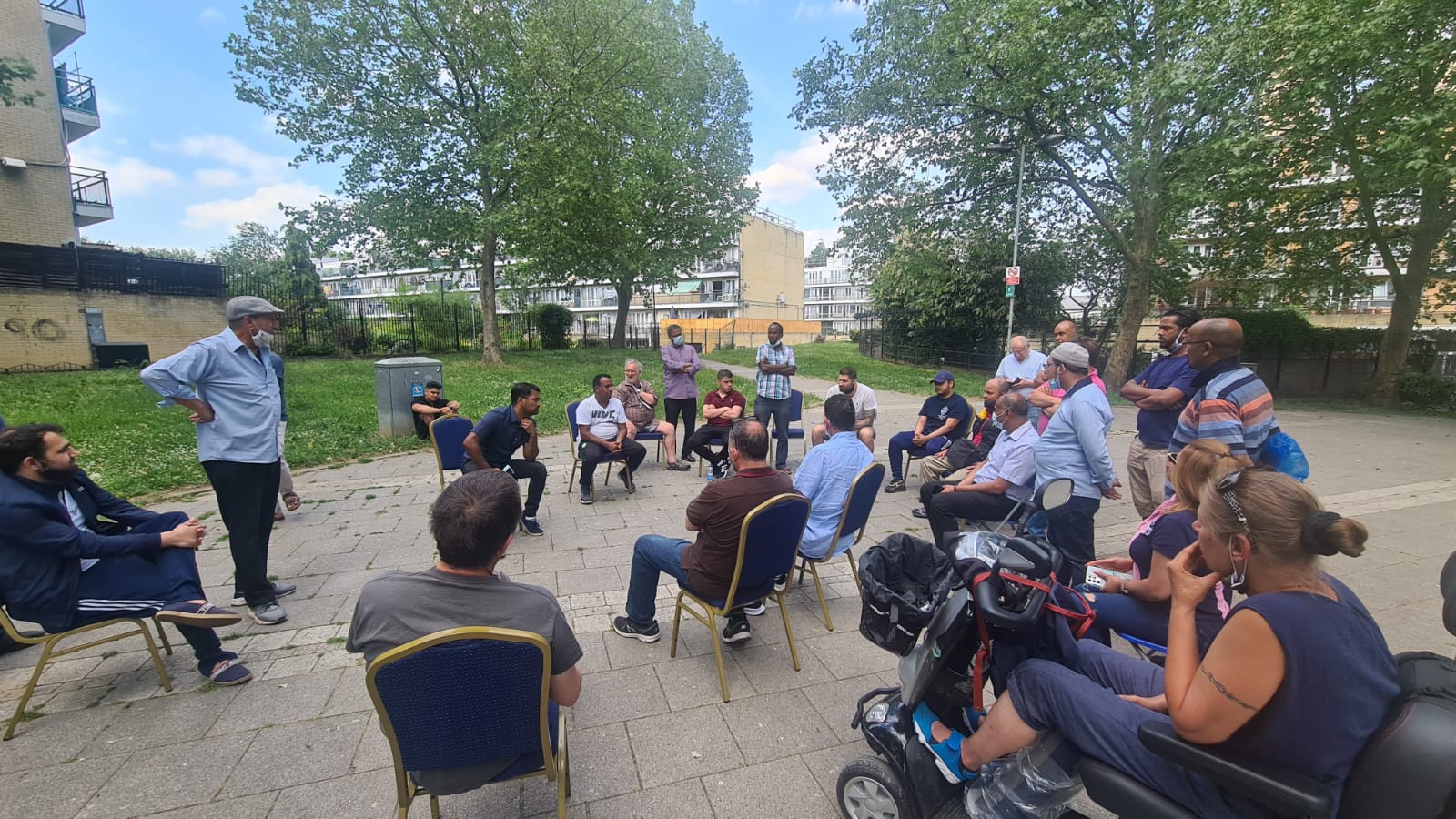 A group of about 30 furious shop owners and residents met outside Queen’s Crescent Community Association (QCCA) for an open-air meeting on Tuesday to vent their frustrations at the recent changes.

Disabled residents and their carers said the ban on cars risked leaving them housebound, with transport to take them to hospital unable to pick them up from outside their homes, and leaving them unable to collect bulky medication.

Shop owners, meanwhile, said their livelihoods were on the line as trade had collapsed since the changes.

The tone of the meeting was in stark contrast to upbeat tweets posted this week by Town Hall regeneration chief, Labour councillor Danny Beales, who described new wooden planters and seating areas as “looking great”.

A traffic-free zone is now in place along the crescent, dividing it in two. Anyone who breaches the area, marked with signs and the planters, will be fined by Camden Council.

Junctions with Weedington Road and Allcroft Road have been gated off. Traders complained that there had been a lack of consultation and said that “community champions” appointed by Camden had not been seen in the area since the scheme was activated. Some said business had halved and they were looking to sell up.

Kamal Hussin, secretary of the Weedington Road mosque, said the community needed to unify and challenge the scheme, adding: “People are unhappy, that is clear. It doesn’t seem like they have done enough prior consultation.

“We have to follow the procedures. I think if we as the local community come together to fight this, we will be successful. The masjid [mosque] will be behind everyone.”

Jahed Abdul, who lives in Weedington Road and works as a boiler engineer, said he was now having to leave home an hour earlier in the morning and getting home later because of congestion caused by the scheme.

“It’s horrible. This is not helping anyone and it’s going on across London. If you pick up a few fines through these cameras, you might as well not work,” he said.

“How are we meant to go around doing work? People needed hot water and heating in the pandemic, I worked right through, and this is how they repay us?”

Several told Foyzeur Miah, the chief executive of QCCA who chaired the meeting, that it had divided the area. “It’s about gentrification, that’s what it is,” said Mr Jalil.

Bob Robbins, who is chairman of Gospel Oak District Management Committee, which represents council tenants in the area, said: “It’s a complete waste of money. Camden aren’t taking any notice of what people think or what people say. They have just wasted money on it.”

“These businesses, the majority are also local residents, Camden residents, who have a Camden business in a local area supporting the community. These decision-makers need to come to the table and really listen to them and be asked really tough questions about whether this scheme is working for local business and the local community.”

A council spokesman said the Town Hall was set to speak to NHS trusts about issues raised by the New Journal regarding patient transport.

Camden’s transport and environment chief, Adam Harrison, said consultation results backed the scheme and emergency services were unaffected by it. Another full consultation will take place in November, after the trial.

He added that the community champions had not yet started work, despite the scheme being in place for a fortnight, adding: “These posts will act as points of contact for the scheme, helping to collect feedback from businesses, residents and traders on the effect of the changes and informing the final design that the council will consult on.

“This is a trial and we will continue to listen to feedback from residents, businesses and other stakeholders on this scheme. We’re also continuing to closely monitor data from Queen’s Crescent, including pedestrian volumes and any impacts to local businesses.” 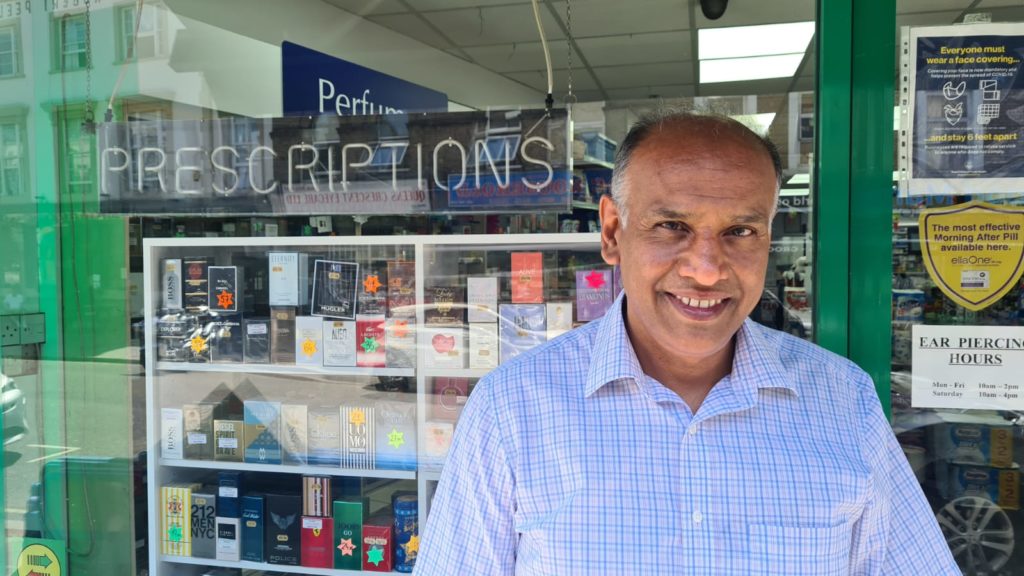 TRADERS are already counting the cost of road closures in Queen’s Crescent, as customers are taking their business elsewhere, staff are quitting jobs and deliveries are becoming difficult.

Mani Patel (pictured), who has owned pharmacies on the road for 35 years, said one of his delivery drivers, who mainly caters for disabled or elderly residents with mobility issues, resigned last week due to the problems created by the closures.

“I often go walking to hand deliver some of the medication myself in the evening, but I can’t be doing that every day. I have to tell them: ‘As much as I love you, I don’t have the resources to do this again.’

“They can’t bring their cars now to pick things up, [and] we can’t deliver, so they are isolated.”

He said he had to closed one branch on Saturday due to a lack of business.

Mr Patel added: “The whole consultation process was flawed, I don’t think it was done properly, our businesses weren’t communicated with properly. Now the problems have occurred they have impacted the whole crescent, no delivery drivers want to come and deliver. Instead of reviving the market, it will kill the market.”

Abdul Jalil, who owns QC Poundplus, said he had seen takings drop by 50 per cent, and although he saw a minor improvement last week, it still worried him.

He added: “It was really, really quiet, and it’s a little bit better this week but still not good. It’s becoming very difficult, loading and unloading is very difficult as well.”

Amir, who owns Tiba food stall said he had seen a similar fall, adding: “We will have to close soon. We supply meat. If we don’t sell the meat we will just have to throw it in the bin and we’ll lose money doing that. We will have to sell up.”

Disabled ‘It takes away their dignity’ 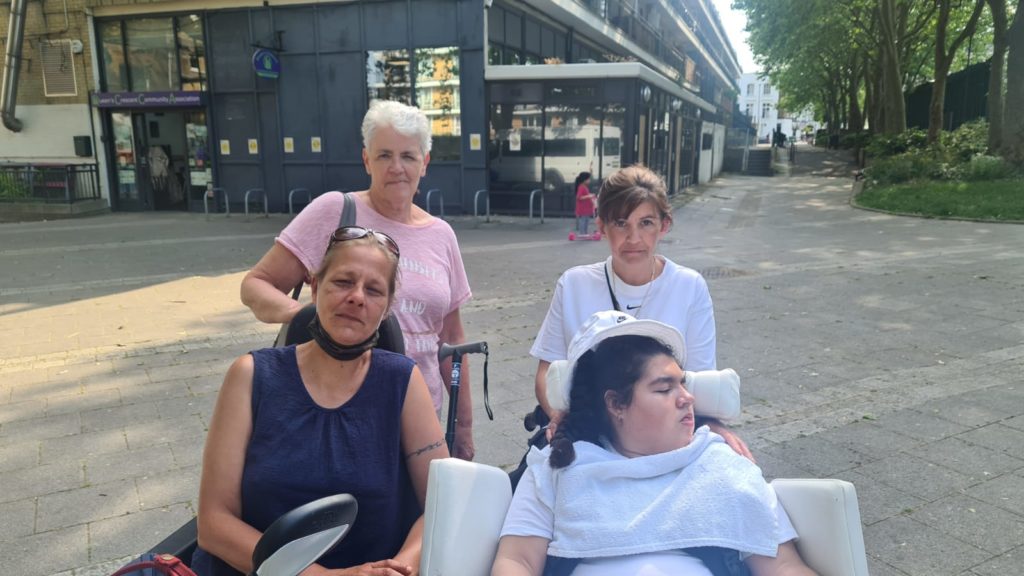 People with disabilities have been left stranded. Back row (L to R) Heather Robbins and Emma Nicolaou. Front; Moran Watson and Tyler London

EMMA Nicolaou, whose daughter Tyler London has several health problems including dystonia, epilepsy and blindness, said the road closures had violated her daughter’s dignity – after she suffered a seizure while being taken through Queen’s Crescent market.

The road closures mean the 21-year-old wheelchair user can no longer be picked up outside their home in Weedington Road to be taken to college in Camberwell Green.

Instead she has to be taken to the top end of Queen’s Crescent to be collected, and then faces a delayed journey to get to south London. Last week Ms London who is also dependent on oxygen tanks, suffered a seizure while being taken there.

Ms Nicolaou said she had emailed councillors and Labour leader Sir Keir Starmer, but hadn’t had a reply.

The closures also mean she is unable to collect medicine, food and oxygen for her daughter from nearby Fine Pharmacy. Due to the amount of supplies she has to collect, she has to use a van, which would now have to take a mile detour to travel the 100 yards due to the closures.

Moran Watson, who suffers from non-epileptic seizures and has dialysis three times a week, lives in Allcroft Road. She said she is unable to access her patient transport to get to medical appointments as it now won’t pick her up outside her house, and she can’t walk more than five metres.

She said the only alternative would be leaving her scooter parked in the street until she was dropped off again. “It’s disgusting, they don’t care about disabled people at all,” she told the New Journal. “People are worried about if they have to ring for an ambulance, how will it get through? What will the delay be? We already know that any delay is dangerous.”