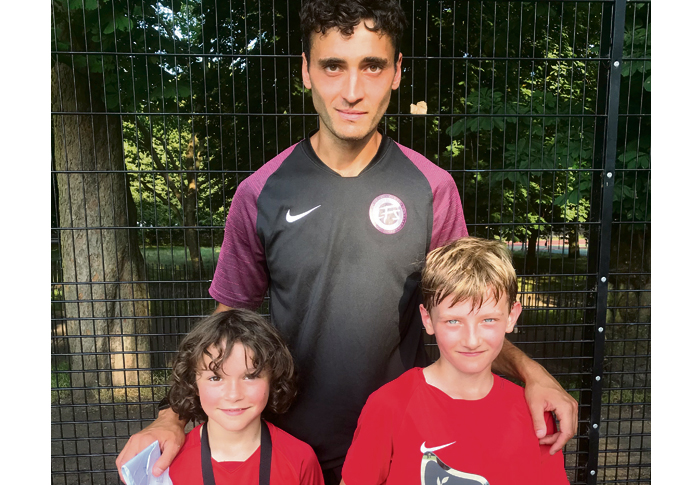 THE organiser behind a new three-a-side youth futsal league is busy working on plans to make the competition even bigger and better.

The inaugural season of the Camden and Islington Three-a-Side Youth Futsal League came to a close on Thursday at Highbury Fields.

After 11 weeks of fun action, Islington-based side Mac Skills were crowned champions of the joint Under-10s and Under-11s league – winning 13 of their 18 matches to take the title by just three points.

There were also trophies for Los Campos star Alexis Drogonis, who was named the “player of the season”, and Futsal Legends’ hotshot Jared Blackmore Pierce, who finished as the tournament’s top goalscorer.

“The action was fast-paced and they really enjoyed getting more touches of the ball during games.”

The Futsallers (in pink) take on the Essex Road Giants

Played with a smaller, heavier ball, futsal favours close control and quick passing in small spaces, and puts an emphasis on improvisation and technique.

Even after just three months of playing once a week there was a marked improvement in the children’s understanding of the game. Parent Amy Lawrence, whose son Nico plays for Mac Skills, said: “It has been so impressive to see how much progress the kids made with their technique, speed of thought and awareness. Even better, that all happened while they had so much fun and motivation.”

Far from just soaking up all the success surrounding the debut season, however, Shaz is already drawing up plans to make the league even sharper.

“We’re also thinking of making it so that it’s the club that registers for a place in the league, rather than the individual players. That would mean if a club wants to bring a different squad of players each week, they could, and that way even more kids will get the chance to try futsal.”

As it stands, the Camden and Islington Youth Futsal League is set to return next summer. But Shaz said he would love to run an autumn league if he could find sponsorship.

He added: “Obviously, hiring an indoor pitch is more expensive, and as the weather starts getting colder and wetter, playing outside just won’t be possible.

“To run a league we’d need to block-book pitches, which is even harder and more expensive, so we’d definitely need help covering the costs. So, if there is anyone out there, or any companies that would like to help out, we’d love to hear from them.”

Any businesses interested in sponsoring the Youth Futsal League are urged to call Shaz on 07468 628 391 for more information.