Not so sacred: life of a dairy cow 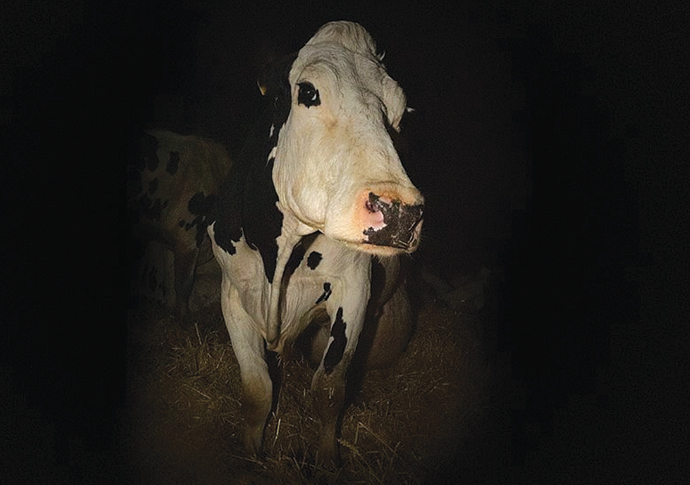 WHILE Andrea Arnold’s latest film – and one that is a documentary, rather than her usual features – is very beautiful and dramatic to look at, it’s the soundscape she has created that makes this film about the life of a dairy cow intriguing and memorable.

This is a film full of squelchy farmyard sounds – from the moment the cow is born, the boom microphone picks up every little moo, every clatter of hoof on barn floor, every scrape of farmer’s shovel. It’s an astonishing piece of audio.

Arnold begins with the mother cow, helped by a farmer, birthing the calf. We see its legs appear, and with the help of two bits of old rope and some hay from the floor to offer some grip as the messy birthing fluids cover everything, the farmer brings the creature into the world. Cue lots of noisy licking from its mother.

We know how this film will end, and we know how the world of agriculture works. As we follow the journey, we are gently shown how these massive beasts are worked. The cattle take centre stage – apart from the calls of an auctioneer off camera, and the occasional murmur from a farmer, this is about the life of a cow with the humans, who guide its shape, absent. They only make their appearance when the end is coming.

The brutal world this creature is born into is laid bare, with no sentimentality. Her removal from her mother – after we watch her try to feed from milk-engorged teats – to watching an unpleasant procedure which cauterises her horns, through to the way the calves take to artificial teats as their mothers are off to give the farmer milk, life on a farm is made clear, and done without the need for any further explanation or narration.

It asks the viewer to think about how we treat other sentient animals – a crucial question to consider as we fight the climate emergency.

It is also about animal welfare – what sort of a life do we give these creatures, and how much are they aware of their role as economic units that come to an unpleasant end when their use has run out?

These animals are bred for one reason, and one reason only. Arnold’s skilful film-making doesn’t bang a drum for vegetarianism or veganism – it doesn’t really need to. Instead, it’s a thoughtful, beautiful documentary about an industry we all know about but for our own peace of mind, all too often attempt to avoid thinking honestly about what it really entails.