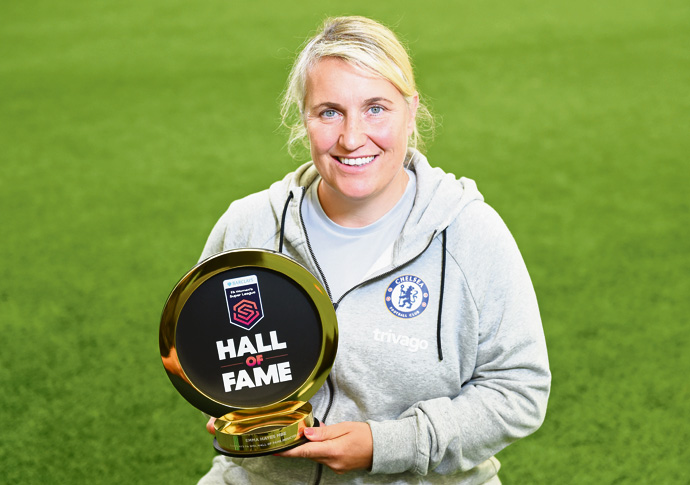 ON Monday night, Chelsea boss Emma Hayes chewed the fat with Thomas Tuchel at the Ballon d’Or ceremony in Paris. On Sunday afternoon, she will walk out at Wembley Stadium for the most prestigious final in the domestic season.

The stuff of dreams? Perhaps, but former Parliament Hill School pupil Hayes knows that a tough test awaits her in the FA Cup at the weekend – and it is not just the one posed by her old club Arsenal.

Ahead of the break, Hayes, who was inducted into the Barclays FA Women’s Super League Hall of Fame in October, described the situation as “not ideal”, but she was nevertheless pragmatic as she looked towards Sunday’s final, which marks the 50th anniversary of the competition.

With Arsenal head coach Jonas Eidevall also welcoming players back from international action, there is a level playing field to some degree. Although Ian Wright was clearly desperate for the Gunners’ own star striker, Beth Mead, to get a rest on Tuesday night.

Mead bagged a hat-trick and as many assists as England battered minnows Latvia a record 20-0 in their World Cup qualifying match in Doncaster.

But as the clock ticked down, Arsenal hero Wright, who was at the match, tweeted: “GET BETH OFF!”

It seemed fair enough. Sarina Wiegman’s side were winning 13-0 at that point. But the lively Mead remained, as did Arsenal’s Lotte Wubben-Moy, while half-time substitute Jordan Nobbs made the most of her 45 minutes with a neat goal.

It was a successful evening for Chelsea’s players, too. Millie Bright captained England, Beth England scored twice and Jess Carter got her first goal for her country.

With more than 40,000 tickets already sold, it looks as though Wembley will come close to the record of 45,423 set the last time that Arsenal and Chelsea graced the final in 2018. The Blues won the crown in that encounter, avenging Arsenal’s win over them in 2016. Should Chelsea emerge victorious again, Hayes would become the first female manager to win the competition three times.

The 32-year-old, who won three League Cups, two FA Cups and two league titles during her time at Arsenal, overtook Smith’s 46-goal record by two with a hat-trick against Latvia.

That leaves White five off Wayne Rooney’s for England – not that she was giving much thought to that.

“To be honest, I’m just focusing on what I can control: playing for England, loving what I’m doing [and] supporting the team,” she said afterwards.

“We don’t need to talk about it anymore!”