No more lame excuses please – too many have died 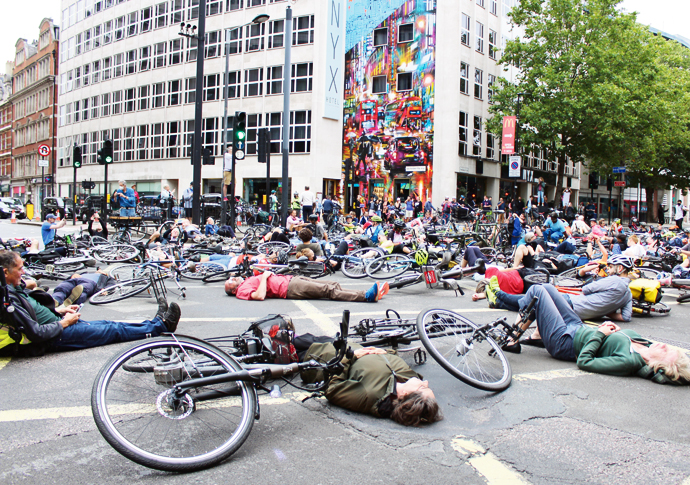 CYCLISTS in good number laid down at a junction in Holborn on Friday evening to mark where Dr Marta Krawiec was killed in a collision, (‘Die-in’ demo for cyclist doctor, August 27).

A white “ghost bike”, slightly rusty now, had already been chained to a lamppost to mark a previous fatality from years ago. It should be a haunting sign. Somebody died. Six people died, in fact. The warnings were there and, by and large, nothing was done.

Before the ‘die-in’ protest, TfL’s Will Norman and Adam Harrison, the environment chief at Camden Council, said safety works would be brought forward, suggesting the reason they had not been in place already was because of the “Covid-19 pandemic’s severe impact on TfL’s finances”.

Both men are champions for cycling and have been behind several cycle experiments on the roads over the past 18 months that have provoked both support and opposition.

But the excuse of the pandemic must feel hollow to the friends and families who have died or had lucky escapes on the Holborn gyratory over a timeframe of more than a decade. Long before anybody had heard of Covid, cyclists were getting hurt on a dangerous roadmap.

Both Boris Johnson and Sadiq Khan as London’s mayors, despite the obvious need for safe cycle routes as the city looks to more cleaner modes of transport, have shown a stunning inertia in the face of the most shattering of all warnings: people’s deaths.

It is not the only issue which we could have expected more dynamism and drive from Mr Khan, who some felt won a new term earlier this year almost by default rather than on the back list of bankable achievements.

One reason for both mayors’ failure to take the bull by the horns is an ineffective London Assembly – where Labour members rarely want to pursue “their” man with embarrassing lines of questions or, worse, simply do not have the energy themselves to provide effective scrutiny.

Johnson and Khan often appeared to see questions in the chamber as an irritating duty. The real decisions are taken elsewhere among a carefully selected circle of deputies and advisers.

For the best part of the decade, cyclists have been asking for a safe route through Holborn. The pandemic cannot be blamed on everything. A fair amount of construction work banged on throughout the city during the lockdowns, after all.

Sadly, the junction there is not the only tale of safety works that were never done. Improvements to both Camden Road and the King’s Cross gyratory – both of which saw deaths that may have been avoided – fall into a void.

There should be no more excuses, no more delays.