A welcome to members of the ‘new old' club

Eric Gordon introduces Never Too Old, a new magazine for the ‘young-and-elderly’ 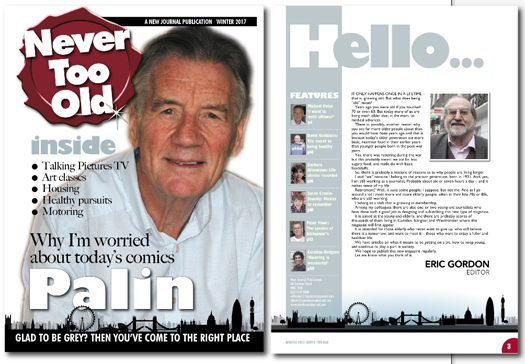 It only happens once in a lifetime – that is, growing old. But what does being “old” mean?

Years ago you were old if you touched 70 or even 60. But today many of us are living much older due, in the main, to medical advances.

There is, possibly, another reason why you see far more older people about than you would have done years ago and that is because today’s older generation ate more basic, healthier food in their earlier years than younger people born in the post-war years.

Yes, there was rationing during the war but this probably meant we ate far less sugary food, and made do with basic foodstuffs.

So, there is probably a mixture of reasons as to why people are living longer. I said “we” because I belong to the pre-war generation, born in 1931. And, yes, I am still working as a journalist. Probably about six or seven hours a day – and it makes sense of my life.

Retirement? Well, it suits some people, I suppose, but not me. And as I go around a lot I meet more and more elderly people, often in their late 70s or 80s, who are still working.

I belong to a club that is growing in membership. Among my colleagues there are also one or two young-old journalists who have done such a good job in designing and sub-editing this new type of magazine.

It is aimed at the young-and-elderly, and there are probably scores of thousands of them living in Camden, Islington and Westminster where this magazine will first appear.

It is intended for those elderly who never want to give up, who still believe there is a tomorrow, and want to meet it – those who want to enjoy a fuller and healthier life.

We have articles on what it means to be getting on a bit, how to keep young, and continue to play a part in society.
We hope to publish this new magazine regularly.

Let me know what you think of it.